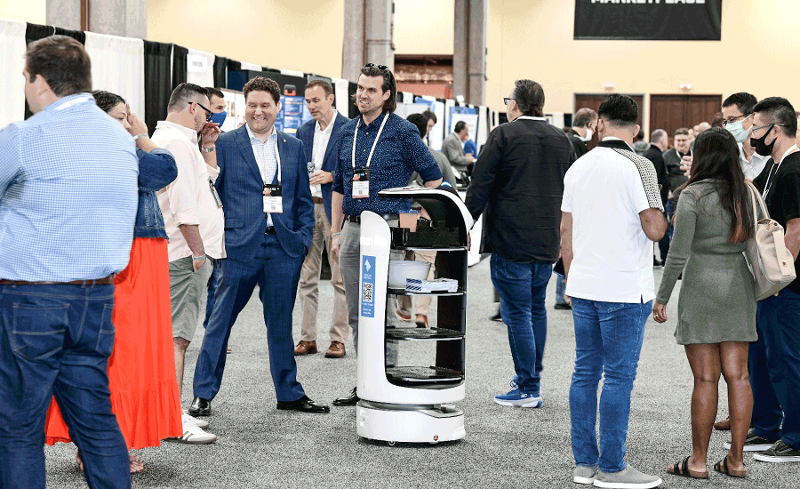 A server robot roams the floor at FSTEC / Photograph by W. Scott Mitchell

What’s hot in restaurant technology? Which solutions are past their prime, or not yet ready for prime-time? Restaurant Business editors gathered intel from across the FSTEC conference this week to take tech’s temperature. Here’s what they found.

It’s not that unusual to see robots roaming the floor at a restaurant technology event. But this year’s automaton attendees carried a little extra oomph against the backdrop of restaurants’ labor struggles.

In a vacuum, the bots’ labor-saving potential was evident. A robotic drink maker called Botrista, for instance, mixed up a mango oat milk so quickly that it was done before its human minder had a chance to fill a cup with ice.

Dine Brands CEO John Peyton recalled that robots were in use at Aloft hotels eight years ago. "It's not so far off to think that could happen” in restaurants, he said.

“If you don’t have a cloud-based POS, go get a cloud-based POS,” said Todd Madlener, president and COO of the Coolgreens salad chain. The 11-unit concept switched to a cloud-based system in 2018, and Madlener was immediately impressed by the stream of real-time data it provided. The chain can act on the data almost instantly, pushing out promotions for slow-selling items, adjusting prep times and more.

Operators have been drawn to that option by hopes of increasing sales. At FSTEC, the devices were touted as a way to ease the burden on the kitchen staff. As Wade Allen, SVP and head of innovation at Brinker International, explained, the use of the handhelds lessens the chances that a KDS will run 15 screens deep all of a sudden because a server has just gotten to the POS with all the orders from their station.

It’s getting hot again, according to Charles Gray, chief revenue officer of Paytronix. He recounted how he'd recently tried to buy some coffee with cash, only to draw a withering look from the cashier. "We saw this happen in China a few years ago," Gray said. "It's just a matter of time."

Brinker is keeping an eye on it as a long-range possibility, according to Allen, and Peyton of Dine Brands also expressed interest. The small third-party delivery company Hungr has already rolled it out, CMO Aaron Mortensen said, though he noted there are certain places, like apartment complexes, where airborne delivery doesn’t make sense yet.

The rush toward guest loyalty programs has been well-established, but at least one industry watcher is skeptical about the trend.

“I always worry about things that everybody is going after at the same time,” said Neil Culbertson, founder and president of Growth Partners, a restaurant marketing consultancy.

“I think Starbucks and Panera … those are two of the brands that I think of who have amazing loyalty programs,” he said. “For most organizations, loyalty is just one more thing that’s bolted on to the department, and I don’t think it necessarily gets the attention and care and feeding that it needs.”

Geofencing has become a common tool in many big chains' apps to help with mobile orders, said Aaron Noveshen, co-founder of The Culinary Edge. They could gain traction as restaurants continue to make a big bet on pre-ordered food as a way to handle takeout demand and take some pressure off of drive-thrus. But to operators, the technology remains too sub-par for it to become a major player, at least not yet.

The pandemic tech darling may have overstayed its welcome, at least with consumers.

“We thought for sure that was gonna be here forever,” said Madlener of Coolgreens. But as soon as guests started returning to restaurants, the first thing they wanted, he said, was a paper menu.

“Things that are not really guest-focused, like the QR code for many people … I’m surprised it’s back,” Culbertson said. “I don’t know if it will be here long-term.”

But restaurants still seem to like them. QR-code-based payment company Sunday, for instance, launched in April behind a $24 million seed round and already has 1,500 restaurants signed up, said U.S. CEO Christine de Wendel.

Digital money has been getting more buzz in the restaurant space recently, but it remains far from becoming a mainstream payment option, said Melissa Wilson, principal with researcher Technomic. Just 4% of operators surveyed by the company said they planned to start accepting crypto over the next two years.

Wilson attributed the lack of interest to complexity as well as restaurants’ need to catch up on other forms of payment first.

Madlener recalled the days when kiosks were all the rage for fast casuals. But they didn’t work well for Coolgreens.

“They sat, collected dust, didn’t work half the time, and it just for us wasn’t a win,” he said.

As Shipley Do-Nuts CMO Donna Josephson pointed out, most customers have self-ordering kiosks in their pockets these days.

CORRECTION: A previous version of this article misstated SpotOn's valuation. The company's valuation is $3.15 billion.