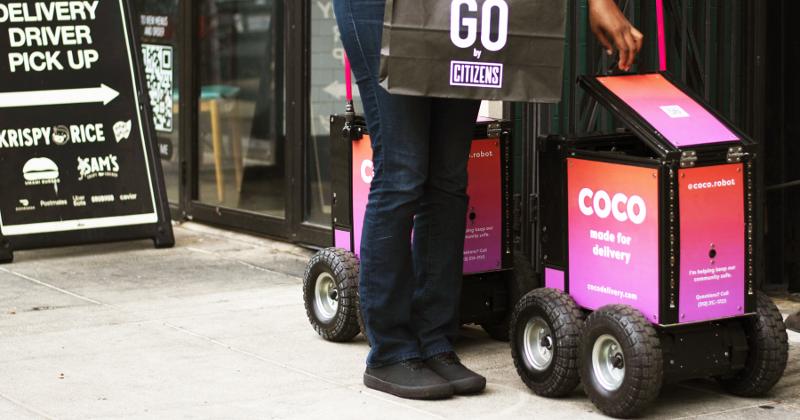 Restaurant staff can load food into a Coco bot as soon as it's ready. / Photograph courtesy of Coco

Digital restaurant company C3 is using robots to deliver food from some of its locations.

The owner of brands like Umami Burger and Krispy Rice is partnering with robotics company Coco at three multiconcept outlets in the Los Angeles area, the companies announced Thursday.

Coco's four-wheeled, autonomous rovers will cover a 2-mile radius around the restaurants in Santa Monica, West Hollywood and Los Feliz. The robots offer a litany of benefits for C3, the company said, including reduced delivery costs and faster delivery. Rather than waiting for a delivery driver to arrive, restaurant staff can load food into a bot as soon as it's ready. Then it takes off for its destination, and arrives punctually 97% of the time, C3 said.

The bots cut the typical delivery commissions charged to restaurants by up to 50% and deliver food 30% faster than a human in a car.

"We believe there is no reason to have a 3,000-pound car deliver burgers over short distances," said Zach Rash, co-founder and CEO of Coco, in a statement.

Other benefits include a reduced impact on the environment and a unique customer experience, C3 said.

The technology has been successful so far, and C3 plans to add the bots at additional locations in LA and other cities.

The partnership is another step forward for robot delivery, which has continued to make inroads with restaurants that are looking for an affordable alternative to car-based delivery. Last week, ghost kitchen company Kitchen United completed a robot delivery test of its own in Santa Clara, Calif. KU's chief business officer, Atul Sood, recently predicted that robot delivery could reach scale in urban environments in two or three years.

Fast-growing C3 has more than 250 digital kitchens in the U.S. serving its 40 proprietary restaurant brands. It also operates Citizens food halls featuring its brands, the first of which is slated to open next month in Manhattan, and has its own ordering app called Go by Citizens.

The company founded by Sam Nazarian has raised $90 million from investors this year to fuel growth both in the U.S. and abroad.