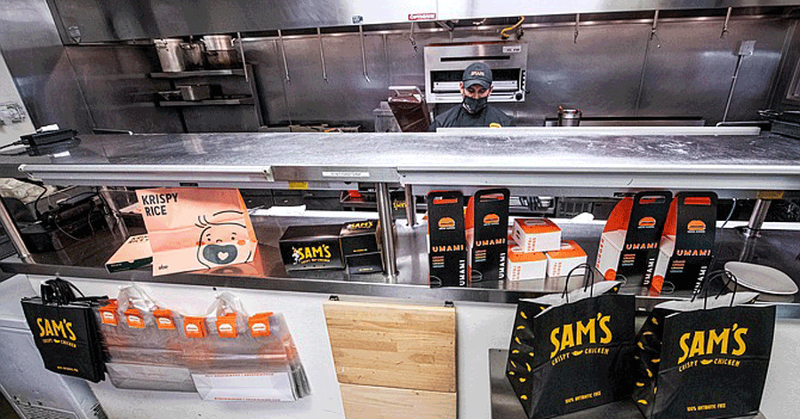 Some apartment dwellers are about to get a ghastly new neighbor.

C3, the ghost kitchen and foodservice operator created by Sam Nazarian, has an agreement with apartment operator Akara Living to put its multibrand kitchens in some Akara properties as a perk for residents.

It's part of C3's strategy to house ghost kitchens in underused real estate. It has started putting them in hotels and closed restaurants, for instance, and also has plans for malls.

C3 kitchens will open this summer in Akara's exclusive Kenect properties in Nashville and Phoenix and will be a standard feature in all future Kenect locations, the companies said Tuesday.

They'll be an addition to Kenect's other amenities such as co-working spaces, fitness clubs and restaurants, which are open to residents as well as Kenect members.

Kenect will house up to seven C3 concepts including Umami Burger, Krispy Rice, Sam's Crispy Chicken and Plant Nation. The restaurants will deliver to Kenect residents, members and the surrounding community, and will also have street-facing cafes, blurring the lines between ghost kitchens and traditional restaurants.

C3 will also take over Kenect's other foodservice operations including restaurants, cafes and bars.

The deal will give Kenect residents and members a "seamless dining experience," said Akara founder and CEO Rajen Shastri in a statement.

"C3 kitchens offer a significant value-add for residents at Kenect," he said.

Kenect properties account for 1,000 beds and have another 2,500 in the works, with locations planned for Denver, Miami, Cleveland and Minneapolis.

C3, which stands for Creating Culinary Communities, has more than 200 "digital kitchens" and 15 restaurant brands. Its model differs from other ghost kitchen companies that rent space to restaurants in warehouse-like kitchen centers. Its brands are currently available on third-party delivery platforms, and it has plans to launch its own delivery app, called Citizens Go, later this year.