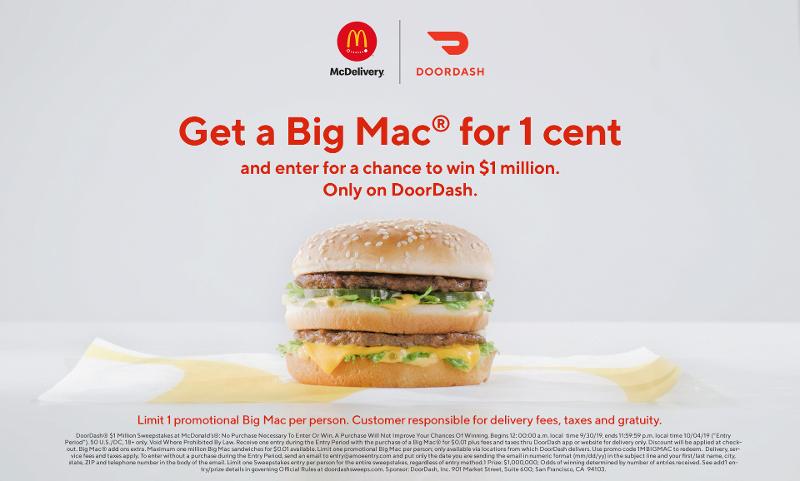 DoorDash really wants its customers to know that it delivers McDonald’s now.

The delivery provider on Monday said it is selling 1 million Big Macs for 1 cent apiece and is also holding a $1 million sweepstakes.

Customers who order a Big Mac through the company’s app from Monday through Friday this week will get it for a penny if they use the promo code “1BIGMAC.” They will also be entered into a contest for $1 million.

McDonald’s announced its deal with DoorDash in July, its second major delivery provider after Uber Eats. The chain’s restaurants have quickly added the option, which is already in more than 9,300 of its nearly 14,000 U.S. locations.

That has given it enough coverage to begin marketing the service, which both providers and the company believe is key to generating sales and traffic growth.

It’s also a sign that delivery providers themselves have their own established customer bases who prefer using them, or who are in markets where they’re strongest. That has increased the number of chains using multiprovider strategies.

McDonald’s had used Uber Eats for nearly two years before expanding its McDelivery service to other providers. It uses Grubhub and Seamless in the New York City area, giving it three domestic delivery providers.

Earlier this summer, McDonald’s and Uber Eats ran deals to market that provider’s delivery service. Other chains, notably Chipotle Mexican Grill, Taco Bell, Wendy’s and others, have been heavily marketing delivery this year as they seek to grow customer awareness of the service.