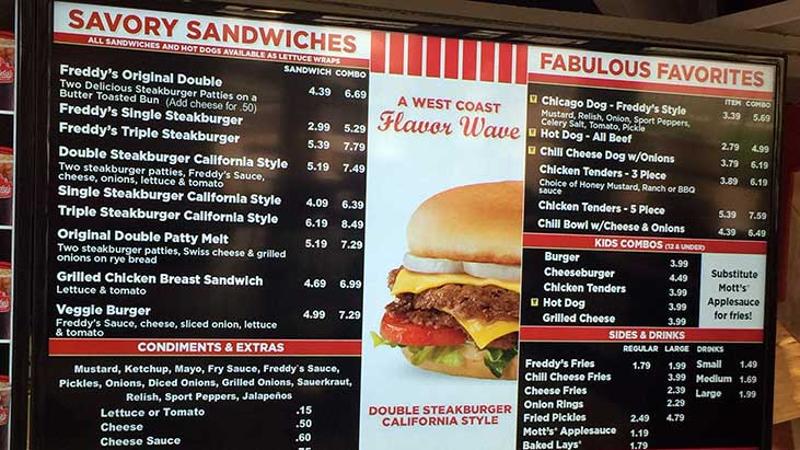 Scott Redler has no trouble counting the reasons that Freddy’s Frozen Custard & Steakburgers invested in digital menu boards. The chain’s chief operating officer says that in a growing company with more than 240 locations nationwide, a key benefit is being able to update all the menu boards simultaneously to showcase regular menu items or roll out seasonal offers.

“Our franchisees can dictate their own pricing, and the changes can go live immediately,” Redler says. “It’s also hard to deny that the boards are eye-catching. If we do a side-by-side comparison of our food images on a static menu board versus digital, the digital wins for us every time.”

Freddy’s started implementing digital menu boards a few years ago, and since then all of its restaurants systemwide have made the switch.

More recently, to help customers feel more involved with what’s going on inside their stores, Freddy’s added a scrolling Twitter feed to the digital menu boards. “It’s a great way for guests to see what others are saying about us,” says Redler.

Something old, something new

McAlister’s Deli recently launched new chalkboard-style menu designs hailing back to the chain’s founding—on both digital and static boards. “Think about what you can do to get that branded look and feel though animation, photography and graphics,” says Randy White, vice president of retail information technology for Focus Brands, which includes McAlister’s Deli, Moe’s Southwest Grill and other brands.

The signage was designed in-house, then deployed to 283 screens in 49 stores. “Some locations have six digital menu boards and two static boards at the point of purchase, a more affordable option for the operator. And the look is very clean across the store,” says White. Even better, wait times have decreased, and guests find the new signage easier to read.

People tend to stand around menu boards deciding what to order, making it perfect positioning for new facial recognition technology. “The software can capture general demographic information, like age and gender, and update the board messaging to promotions targeted to the guests standing in front of it,” White says.

Focus Brands isn’t yet using the technology, but other brands are. KFC China in Beijing features a smart menu board equipped with facial recognition that makes menu suggestions based on the guest’s age, gender and facial expression. In the U.S., Texas and Illinois laws prevent use of the tech without prior customer opt-in. So Wow Bao offers guests the option to use facial recognition at their self-ordering kiosks on future visits.