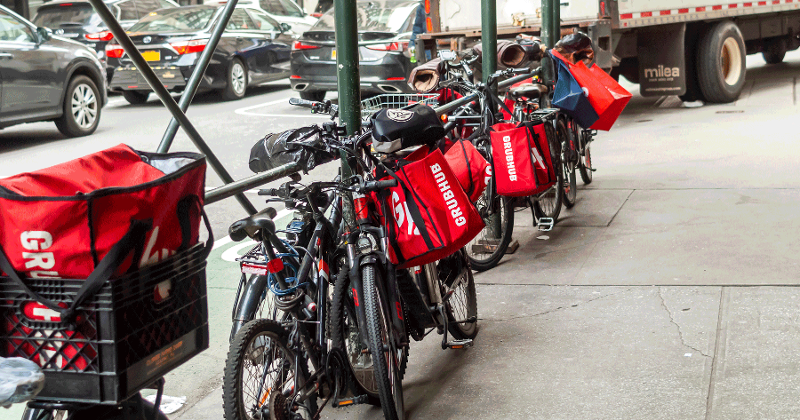 The three major third-party delivery services filed a lawsuit against New York City on Thursday, arguing that the city’s delivery fee cap is unconstitutional and blasting it as “driven by naked animosity toward third-party platforms.”

Grubhub, DoorDash and Uber Eats filed the lawsuit in a federal district court in New York, arguing that the city has “more lawful” means to help restaurants than to cap fees on delivery. The three services also argue that they have spent millions to market restaurants and helped them generate business.

“Grubhub has worked hard during the pandemic to support restaurants in New York City and across the country,” one of the firms, Grubhub, said in a statement. “Despite our best efforts, the City Council recently passed an unprecedented and unconstitutional price control targeting the food delivery industry. Price controls increase delivery fees for consumers and therefore lead to a reduction of orders for both restaurants and couriers.

“While Grubhub remains willing to engage with the City Council, we, unfortunately, are left with no choice but to take legal action.”

In a statement, Councilmember Mark Gjonaj, chair of the NYC Council Small Business Committee, said he was proud of the committee’s 2019 hearings on what he called the “all-too-often, David-versus-Goliath relationship” restaurants have with delivery companies.

And he defended the permanent fee cap and called the lawsuit “baseless.”

“The laws simply seek to bring fairness to a system that all too often lacks it,” Gjonaj said. “Instead of baseless lawsuits designed to protect their unbridled greed, I encourage the delivery platforms to consider the damage that these predatory practices have on the struggling small businesses that they call ‘partners.’”

The lawsuit is the latest in a growing battle between some urban cities and the delivery companies that rely on business within them for profitability. The lawsuit comes two months after Grubhub, along with rival DoorDash, sued San Francisco over a similar fee cap.

The lawsuits highlight the tension that has built between delivery services and the restaurants that have come to use them more frequently after a pandemic pushed business toward delivery. Many cities, including both New York and San Francisco, passed temporary fee caps to help restaurants during that period—backing arguments made by restaurant operators that the fees were excessive.

The three services have come to dominate the burgeoning market, providing delivered food from a broader range of restaurants than has traditionally been available, while making it relatively easy to do by phone. But these services generally charge a percentage of the order price as a fee that can run as high as 30%. New York City has capped fees in the city at 15% per order and 5% for other fees.

The delivery companies have argued that price controls ultimately lead to higher prices for consumers and fewer choices and that it isn’t a public health emergency given that indoor dining restrictions have largely been lifted in the city. They also argue that third-party services were targeted for controls while other services remain largely untouched.

The lawsuit argues that the legislation “bears no relationship to any public-health emergency and qualifies as nothing more than unconstitutional and unnecessary government overreach that should be struck down.”

It says the ordinance is unconstitutional because it interferes with “freely negotiated contracts between platforms and restaurants.”

The lawsuit argues that the city has avoided more direct aid to restaurants like tax breaks or grants in favor of what it calls “unlawful economic protectionism” that violates the U.S. and New York constitutions.

“Plaintiffs spend hundreds of millions of dollars annually in marketing their platforms, which enables restaurants on their platforms to reach new and existing consumers for incremental orders, because when restaurants survive and succeed, so do plaintiffs,” the delivery services said in their lawsuit.

Andrew Rigie, executive director of the NYC Hospitality Alliance and a backer of the fee cap, called it “a last-ditch lawsuit” that “demonstrates that these billion-dollar corporations will use every weapon in their war chest to overturn widely supported legislation and continue preying on New York City restaurants.”

“These big third-party delivery companies use their money and market domination to increase fees on small businesses,” he added.

UPDATE: This story has been updated to clarify that all three delivery services filed the lawsuit. It has also been changed to add the reactions from Mark Gjonaj and Andrew Rigie.