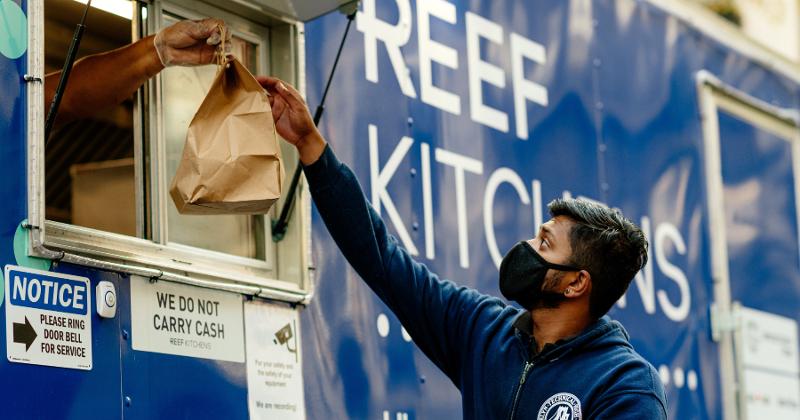 Fast-growing ghost kitchen operator Reef has hit a snag in the Big Apple, where the city says its kitchen vessels violated health and safety rules.

The NYC Department of Health and Mental Hygiene found that "multiple" of the company's locations were breaking "numerous" requirements, said department spokesman Michael Lanza in an email on Friday.

Reef denied violating any rules. It said it had been operating its mobile, parking lot-based vessels under temporary permits and that it closed them several weeks ago when those permits expired. It is operating out of brick-and-mortar locations for now and said it hopes to reopen the closed locations.

"We continue to work collaboratively with regulators on ways to permit our innovative model," a Reef spokesperson said in an email.

The health department had not responded to a question late Friday about the apparent discrepancy.

Reef has less than 10 kitchen vessels in New York, the spokesperson said.

Reef's modular vessels are typically set up in parking lots, where they serve as pickup and delivery hubs for orders placed online. This model doesn't always fit neatly into cities' existing permitting frameworks. Officials in its hometown of Miami, for instance, amended the city's code this spring to create an ordinance for Reef that is distinct from food trucks.

“What we always want is to work with cities to kind of understand the current framework … and to proactively collaborate with them to find the best path forward,” Reef Director of Communications Mason Harrison told Restaurant Business in May.

The company has been growing rapidly in recent months. In the past few weeks alone, it unveiled deals with Wendy's, TGI Fridays, 800 Degrees Pizza and more to open thousands of new locations. It has more than 300 kitchens worldwide.