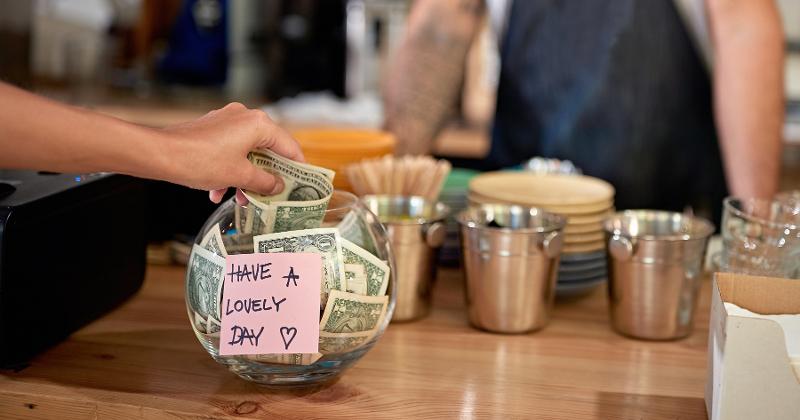 A short time back, I had a leaky kitchen faucet. So as you might expect, Peter, I called for help--in this case a competent plumbing pro I’d used in the past. The drip duly repaired, he offered me his smart-phone invoice for on-the-spot payment, and you can imagine my surprise when, below the service fee and the trip charge, there was a line for tips. Wait, what? Trying to look cool, I tapped the 20% box and spent the rest of the day wondering when exactly such tradesmen had joined the ranks of tipped employees.

It's clear that I’m not the only consumer baffled by tipping protocols and befuddled by how they’re evolving in the post-Covid economy. Since January, The New York Times, Washington Post, The Economist, The Guardian, Food & Wine, Linked In, Eater and even The Hill, the political website that boasts the White House among its followers, are some of the sources that have tried to help stressed consumers pick their way through the who-when-and-how-much gratuity minefield.

You’d think by this time that restaurant operators and the dining public would have cracked the code. One of the most bedeviling of dining rituals, tipping is also one of the oldest. Said to have originated in 17th-century English taverns, a small monetary token was proffered “to insure promptitude,” a phrase later streamlined to the familiar acronym, “tip.”

Here in the US, the practice has a truly checkered past. In the late 19th century, an anti-tipping movement gained ground on the basis of an implied economic classism that made workers dependent upon beneficent strangers to earn their daily bread. Throughout the following decades, there were ongoing legislative initiatives in numerous states that aimed to outlaw the practice as anti-democratic and discriminatory. Whether these efforts failed because of resistance from tippers or tippees or because of politics is unclear. But neither the custom nor the controversy surrounding it have abated.

While sounding good in theory, in practice these experiments have reportedly failed to meet their stated goals of closing the wage gap between front-and back-of-house workers and keeping waitstaff loyally on board. In fact, some analysts believe that they exacerbated server turnover and made tip-free operations less competitive during the tightest labor market in the history of the business.

From the patron perspective, what has long been perceived as a confusing, if not occasionally coercive, routine has become even more fraught of late as the pandemic shutdown has given rise to new categories of potential tip receivers, notably third-party delivery services. And while diners upped their gratuity spend during the pandemic in a show of support for beleaguered restaurant workers, a survey by CreditCards.com reveals a pull-back in tipping in the first quarter of this year in response to the impact of inflation on their dining budgets.

Still, the practice keeps growing. You may recall that back in the day, one of the primary attractions of the nascent fast-casual segment was that, while its food was casual-dining quality, its fast service didn’t require a tip. Those days are gone. Some fast casuals have a tipping line on their apps, while others have replaced tip jars with touch screens that actually suggest various gratuity amounts or percentages while the patron stands awkwardly in front of the worker.

And more operators are exploiting tipping as an employee recruitment-and-retention tool, including some unexpected brands. You wrote just last fall that Sonic Drive-Ins launched digital tipping in about two-thirds of its units and brought in a whopping $12 million in gratuities in the early going. In so doing, the brand touched off an online firestorm on forums like Reddit, where incensed consumers wondered what comes next: Tipping at drive-through windows? Tipping bussers and janitorial staff?

These are sticky questions that I’m going to hand off to you, Peter. You’ve done a bang-up job of tracking and reporting on this issue, and I wonder what you see in your crystal ball. As I do so, however, I think it’s only fair that I give you a heads up. The New York Times wrote of “tipping fatigue” and quoted a bemused consumer who’d purchased movie tickets via touch screen and was confronted by tipping options. Movie tickets? On top of a $37 bucket of popcorn? Toto, we’re clearly not in Kansas anymore, so don’t be surprised to see my next story submission come to you with its own tip option.

Ah, tipping—the peculiar convention that’s more scorned today than taxes. What’s truly astounding is how little of the criticism is being aired by the parties most affected by the blasted practice, the tipper and the tip-ee.

You mentioned the addition of tipping at Sonic, the drive-in chain where staff members run orders out to customers’ cars, often on roller skates. The chain engineered a way to leave a tip for the runners within its peculiar set-up because that option was the second-most requested change from customers, many of whom were hatching their own ways of getting a gratuity in the employees’ hands.

Sonic hasn’t revealed the most requested tweak, but we’re pretty certain it’s not to ban tipping.

That’s hardly the only instance of customers wanting to leave something extra for the staff. After Danny Meyer dropped tipping at his celebrated restaurants, restaurateur Gabe Stulman adopted the model (with Meyer’s blessing) at his New York City outpost, Fedora.  Despite all sorts of heads-ups to customers, the patrons still insisted on leaving a tip for their servers. When Fedora switched to credit-card slips with no tip line, guests would write one in.

They also steered clear of a popular steak option because a service fee was factored into the price. Because customers no longer had to tack 15 or 20% onto the price of the item, it actually cost them less. But they couldn’t come to peace with the math.

It’s not as if servers and bartenders have a gripe with tipping, either. Maine tried to change the industry’s compensation model for tipped employees several years ago by outlawing the tip credit, the peculiar concession that allows employers to count workers’ tips toward the minimum pay they’re due.

On paper, the move should have increased tipped workers’ pay, since they’d now get the full minimum wage of $7.25 an hour plus whatever guests left as tips.

The move triggered a loud protest—not from restaurant employers or guests, but from the tipped workers themselves. They learned to their horror that customers interpreted the change as an elimination of the need to tip, and the bump in wages didn’t cover what they’d lost in gratuities. Servers formed a lobbying group and successfully fought to reinstate the tip credit.

Their outrage was such that they reached out to colleagues in Michigan and Washington, D.C., to counter in those markets to kill the tip credit.

Ask servers if they’d prefer to work for a straight higher wage rather than tips, and all I can say is be wary of what’s in your soup. Tips have turned restaurant service into a high-paying position, albeit a demanding and physically taxing one. Bartenders and servers in some markets can earn a six-figure living because of gratuities, and that’s the strongest recruitment tool the industry has. There’s no doubt we have to improve the working conditions of those employees, but tipping is not part of the problem.

Of course, other stakeholders all but denounce the convention as Satan’s work. Restaurant Opportunity Centers, the union front that pretends it’s a career-prep service, regularly blasts tipping as a curse that fosters sexual harassment and dampens the earning power of women. It’s campaigning to kill the tip credit on the federal level or state by state, regardless of how servers might actually feel about that sea change.

Ironically, the other group that would like to replace tipping with another compensation model are restaurateurs themselves. As you pointed out, they’re struggling to recruit kitchen employees because workers can make so much more money in the front of the house from tips. They’ve been trying to cook up a way of channeling more of guests’ gratuities to the back of the house as a way of closing the gap.

Those schemes have ranged from paying everyone a straight salary, as Meyer tried to do, to asking customers to leave two tips, one for their server and one for the line cooks. A few have found traction, but there’s hardly a consensus on what the replacement model should be and how the efforts to date have worked.

So, getting back to your original question, what do I think is next in this rosebush of a thorny issue?

Tipping has provided labor advocates with a powerful tool to push for union representation. The tip credit is a complicated concept that many restaurateurs don’t grasp, never mind the general public. Organizers’ argument that gratuities allow restaurant employers to pay staffers less is effective in rousing anti-operator sentiment, so why not keep harping on that message? Besides, it’s technically true, though with a giant asterisk.

Count on them to keep blasting the tip credit and pushing for its repeal nationally, be it with one change at the federal level or jurisdiction by jurisdiction. Several attempts are already underway to put a measure killing the credit on ballots this November.

A repeal of the credit, usually presented as a shift to “one fair wage” for all employees, has repeatedly been sounded by lawmakers as a goal for 2023. They appear to have a powerful sympathizer in the White House.

Restaurateurs will keep experimenting with tipping alternatives in hopes of hitting on a viable replacement. The potential remedy of the moment is the surcharge, which 16% of operators are tacking onto customer bills to offset historic inflation in labor and food costs, according to a just-released study from the National Restaurant Association.

Of course, that model doesn’t provide much guidance to restaurant customers who want to do the right thing but aren’t sure what that action might be. Do they include the surcharge in their computation of what percent of their charge should be left as a tip? Or do they skip tipping altogether, since they’re already directly funding their host’s costs?

My bet is that tipping will continue to be an area of experimentation, uncertainty and general turmoil. But the practice will only spread in its prevalence, as you found with your home-repair work.

It's a matter of a solution not being needed for a practice that works just fine when left to guests and servers.