At a tech conference, you expect acronyms to drop like F-bombs at a Sopranos barbecue. POS, PCI, CMS—the presentations were an effing alphabet soup. But one all-caps tag was usually implied rather than said outright, even though it figured into considerable conversation at FSTEC. The talk usually went like this: 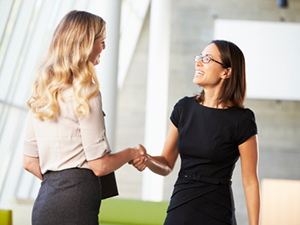 “Hi, John, I’m Doris Doe of ABC Chain. Hey, weren’t your restaurants affected by the walkouts a few weeks ago?”

“No, we were fortunate. The organizers weren’t active in any of our markets.”

Seldom was the key organizer mentioned by name or acronym, an indication of how successfully the group has used struggling minimum wage earners as marionettes. For the record, that group is the S-E-I-U, or Service Employees International Union.

The group’s work is masked by a new approach to labor conflict. The union hall circa 2013 is something called the worker center, which opponents characterize as a union in non-regulatory clothing. Proponents defend it as a homespun aid for workers who want to climb the career ladder. The places usually offer training and services to sharpen visitors’ earning potential. Beneficiaries contribute to the upkeep of the centers, but deeper pockets are clearly offsetting the costs.

It’s easy to see the draw for organized labor. The SEIU is subject to stipulations set forth in federal and state regulations. The worker center that labor experts say the SEIU funds, New York-based Fast Food Forward, is not. By reaching prospects through worker centers, the union can dodge restrictions on recruitment and union organizing.

Buried in the coverage of the recent walkouts by fast-food workers was usually a mention of Fast Food Forward, described as a coalition of churches and local groups. Some stories noted that training had been provided by SEIU, but seldom was a deeper connection attributed to the union.

Labor organizers prefer it that way. Unions have become cursed institutions, tarred by developments like the recent sentencing of a former SEIU president in California to 33 months in prison for embezzling members’ money.

In contrast, who could find fault with a worker center, where colleagues share knowledge for the benefit of all? Ditto for helping members earn more, like the $15 hourly wage the restaurant strikers set as a goal. No wonder the number of worker centers has shot from a handful a few years ago to more than 200 today. Still, there’s no proof they’re delivering on their promise. Indeed, restaurant physics calls their very premise into question.

Consider today’s top restaurant executives. Most climbed there from positions like the ones held by worker center users. What added buoyancy to their rise was expansion of the industry, a dynamic that’s dampened, not fostered, by quantum leaps in wages.

Nor is upward mobility helped by hostility between employer and employee, an accepted byproduct of centers. Warm relations help the climb, as a chain vet attested in a story he told at FSTEC of his son, who had just landed a salaried job at age 22.

The boy started his working life at a restaurant, where he was assigned one evening to assist in the next morning’s prep. The kid overslept and arrived late. Confronted by the owner, the youngster lied and said he’d hit a curb, flattened his tire and bent the rim.

“Let me see the tire,” the restaurateur countered. When the kid balked, the adult told him, “I’m really disappointed. You let us down, and then you lied about it. We can’t count on you, so I’m letting you go.”

Three weeks later, the owner called the boy. He told the teen he wanted to rehire him, but needed to know there’d be no lying or disregard for the rules. That lesson alone, my friend stressed, was worth more than $15 an hour.

Maybe that’s why he shakes a fist every time he hears about worker centers.