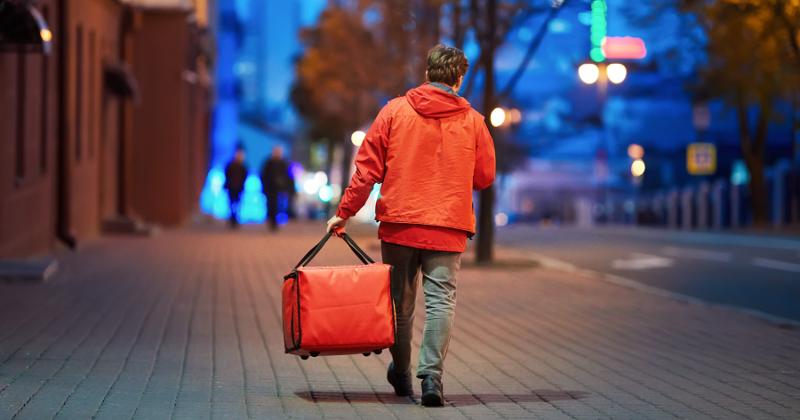 The U.S. Department of Labor on Tuesday unveiled a proposal that could reclassify many independent contractors—including third-party delivery drivers—as employees.

If approved, it could threaten the business models of companies like DoorDash and Uber Eats, which rely on independent contractors to deliver restaurant food and other products.

The proposed rule consists of six criteria that would be used to determine whether a worker is an independent contractor or an employee under the Fair Labor Standards Act. Employees are guaranteed a minimum wage and other benefits that don’t legally extend to contractors.

The DOL said the proposed rule will help prevent the misclassification of workers, particularly vulnerable low-wage earners, and put the federal independent contractor standard more in line with judicial precedent.

“We have found where dishwashers were classified as independent contractors so they would not have to be paid overtime,” said Jessica Looman, principal deputy administrator of the DOL's Wage & Hour Division, during a news conference Tuesday morning. “We have found thousands of workers who have been misclassified.”

The proposal aligns the federal standard more closely with the one implemented by the Obama administration in 2015. That rule was replaced under Donald Trump with criteria that raised the bar on the definition of “employee.”

Since then, third-party food delivery has grown exponentially, aided by the pandemic and consumers’ shift to more online ordering. As delivery companies have grown, so has the pool of independent contractors who can download an app to start delivering food in their cars or on bikes.

The DOL proposal could change that system. Though it would apply to all industries, including construction, healthcare and even restaurants themselves, there’s a chance it could have a greater effect on third-party delivery than it did seven years ago.

“I think the devil’s in the details in terms of exactly what it does and what it looks like,” said Franklin Coley, principal at public affairs firm Align Public Strategies. “I suspect ride-share and delivery companies will have a greater weight consideration than they did in the [Obama rule].”

Regardless of industry, officials suggested the employee-contractor decision would be made on a case-by-case basis.

“We make a determination based on the specific facts in any case that we look at,” U.S. Solicitor of Labor Seema Nanda told the New York Times. “Misclassification harms workers across a wide range of industries.”

Flex, a group representing app-based ride-share and delivery companies, said it was still reviewing the proposal.

“As this process continues, our focus remains on advocating for the millions of app-based earners who choose this work because of the flexibility it provides,” said CEO Kristin Sharp in a statement. “We will continue to work to ensure that any final policy preserves the independence these workers want.”

Uber called the proposal a “measured approach” that takes into account how much its drivers value the flexibility of being an independent contractor. It noted that the gig work industry “grew exponentially” under Obama and called on the Biden administration to continue listening to gig workers.

“In a time of deep economic uncertainty, it’s crucial that the Biden administration continues to hear from the more than 50 million people who have found an earning opportunity with companies like ours,” said CR Wooters, Uber’s head of federal affairs, in a statement.

The proposal relies on six so-called economic realities to determine a worker’s status. In general, they hold that the less control and investment a worker has in their job, and the more fundamental their job is to the overall business, the more likely they are to be an employee rather than a contractor.

The proposal will be officially published Thursday, kicking off a 45-day feedback window that allows stakeholders to comment. After that period ends Nov. 28, the DOL will review the comments and finalize the rule before sending it to the White House for final approval.

If approved, it would be the new independent contractor standard for employers nationwide.

“The federal standard becomes the floor, and the states can choose to go beyond,” Coley said. “In many cases, they have chosen to go beyond in this space.”

A similar effort in California, for instance, was stifled by delivery companies in 2020—though the resulting state law defining delivery drivers as contractors has been challenged in the courts.

The companies have argued that their drivers value independent contractor status because it allows them to work wherever and whenever they want. Changing to a more traditional employer-employee model would raise the companies’ labor costs, which they have said would force them to cut services or raise prices for customers.

Labor is just one of the battlefronts being fought by third-party delivery providers: They have also come under attack for their fee structures, data-sharing policies and other practices. Less than a month ago, the Federal Trade Commission said it would start doing more to crack down on “unfair, deceptive and anticompetitive practices” among gig companies.