Think labor unions are someone else’s problem? Think again. While unions and other workers’ rights groups haven’t fed well at the restaurant trough to date, that scenario is poised to change. In fact, the American labor movement has set its sights on the service sector and may soon be headed, bullhorn in hand, to a restaurant near you. Consider: 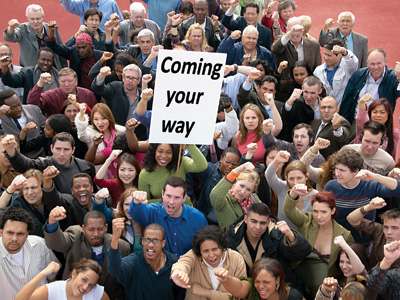 In 2003, the IWW (Industrial Workers of the World) began organizing Starbucks employees. Today, the IWW Starbucks Workers Union (SWU) is held up as an example of “solidarity unionism,” a new approach to organizing that has workers formulating their own strategy and taking direct action against their companies sans mediation from government or paid union representatives. SWU chapters have won wage increases, improvements in working conditions, more consistent scheduling and holiday pay concessions.

Last fall, IWW rallied employees of a 10-unit Jimmy John’s franchise group in Minneapolis. JJ’s employees walked off the job to protest low wages, inconsistent scheduling and lack of sick days. After filing with the National Labor Relations Board (NLRB), the employees held an election to form a union only to lose by two votes. The NLRB nullified the election, however, after the franchise owners were accused of coercion, misinformation and intimidation. Faced with the prospect of another election, the owners accepted a settlement recognizing the workers’ right to organize and admitting improper handling of the first election. The union is now pushing Jimmy John’s to adopt a “10-Point Program for Justice.” If it doesn’t, another election is promised.

In October, the IWW hosted the founding convention of the IWW Food & Retail Workers Union in Portland, Oregon. The group is “an organization of workers at every link in the supply chain of food and retail products.” Convention literature noted, “We have come together to fight for fundamental change in our industries….We seek to build power with our co-workers to win improved wages, guaranteed hours, healthcare and other crucial improvements to our working conditions….The convention will lay the organization’s structural foundation, develop an organizing and outreach strategy based on our approach of solidarity unionism, and plan for the building of industrial unionism in the food industry.”

Employees at New York City’s Boathouse Restaurant in September ended a 44-day strike only after owner Dean Poll agreed to a four-year union contract that includes vacations, sick days and a clause to have arbitrators hear disputes about firings and other matters. It also has family health and dental coverage, which applies to domestic partners. Non-tipped employees had their hourly pay immediately boosted from $7.50 to $13.50.

Michigan-based Andiamo Restaurant Group in March settled a 15-month labor dispute brought by employees and the Restaurant Opportunities Center (ROC) of Michigan. In late 2009, Andiamo CEO Joe Vicari was threatened with a lawsuit if he refused to pay a $125,000 settlement. Employees complained of being forced to pay for their uniforms and laundering, not being paid overtime and being discriminated against after they took their issues to the ROC. The dispute included multiple protests in front of the company’s Dearborn restaurant and a boycott by ROC, UAW and AFL-CIO members. In a joint settlement announcement, both sides said there’d been no wrongdoing on Andiamo’s part. The ROC claimed a “groundbreaking victory for Detroit restaurant workers and the service industry as a whole.”

ROC: A Trojan Horse?
Not familiar with the Restaurant Opportunities Center, a.k.a ROC? You should be, says Rick Van Warner, senior partner and principal at Parquet Public Affairs in Orlando. Launched in New York with the support of the UNITE HERE union by displaced Windows on the World employees after 9/11, Restaurant Opportunities Center is now Restaurant Opportunities Centers United, an umbrella group with chapters in eight major cities. Its mission: “To improve wages and working conditions for the nation’s low-wage restaurant workforce…Through participatory research and policy work, employer engagement, workplace justice campaigns, membership and leadership development and more, ROC-United has become a powerful national vehicle for restaurant workers to lift their collective voice on issues affecting all low-wage workers, including the minimum wage, paid sick days, compliance with basic employment standards and lack of health care.”

Direct union activity is one thing, but ROC is something else, Van Warner warns. “Everything they’re doing is right out of the union playbook,” he says. “They call it ‘collective bargaining through contractual law.’ They wage a PR campaign, typically targeting a high-profile fine dining restaurant. They push it to the brink of bankruptcy until the owner cries uncle and then ROC comes in to settle, agreeing to stop its campaign if the restaurant signs a contractual agreement,” he says.

Fekkak Mamdough, co-founder and co-director of ROC, says there is a need for what they do. He also says he’s familiar with the criticisms.

“A lot of restaurant owners do abuse their staffs and say that we’re just working for the union or pushing people to be in unions,” he says. “That’s not who we are. We have at least 8,000 members nationwide now and what we do is we fight for the rights of restaurant workers. That’s our agenda. Most of us worked restaurants. We’re not just students and lawyers. People want to attack us, but is that going to stop us? No.”