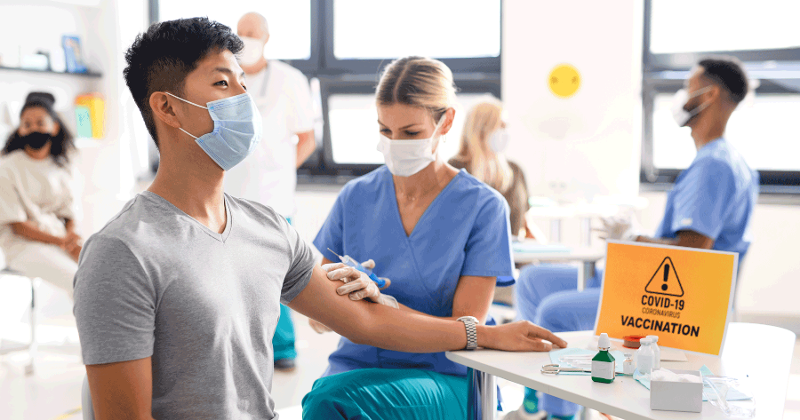 Providing paid time for employees to get a COVID vaccine is emerging as the solution of choice for restaurants contending with the issue of how to get their staffs safeguarded without plunging into the murky area of requiring the shots.

All but Shake Shack have announced within the last 10 days that they’ll provide four hours of paid time office (PTO)—two for each shot required with the Pfizer and Moderna vaccines—at the employee’s current hourly rate of pay. Shake Shack is providing six hours of PTO.  Salaried employees are typically given a day’s worth of time with no cut in pay to get their shots.

Knead, the operator of such acclaimed concepts as chef Edward Lee’s Succotash, estimates that its newly minted policy will cost the company about $15,000. That covers both shots for about 300 employees at an hourly pay rate of about $16.

“$15,000 to keep your staff healthy? I don’t think it’s a question,” says Knead principal Jason Berry. “Even if you’re only thinking about it from a business standpoint, it makes complete sense.”

He cites the local instance of a local restaurant’s employee being unwittingly exposed to someone who later tested positive for COVID-19. The staff member and many of his teammates had to quarantine under standard safety protocols for 14 days.

“How do you operate when you lose half your staff? You’re closed,” says Berry. “If you do the math, and you consider the closings, and the lost days, it definitely makes sense business-wise--$15,000 in expenses to save tens of thousands in revenues down the road.”

Still, he says, “we’re really doing this for our staff and their health.”

“We don’t want any of our Freebirds Tribe members to choose between receiving a vaccine or coming to work,” Alex Eagle, Freebirds’ CEO, said in a statement, using the chain’s term for members of its team.

Knead’s employees have responded warmly to the policy after learning of it in recent days, Berry says. “A lot of them saw it as found money because they were going to get [the vaccines] anyway. They were surprised, because no one else is doing this.”

On a national basis, the number of converts is growing quickly as restaurant workers qualify in more areas to receive the vaccines, which are being carefully meted out demographic group by demographic group because of supply issues.

Detroit and the state of New York both moved foodservice employees up the queue this week, enabling them to start booking appointments to roll up their sleeves. Colorado said restaurant workers will start getting the shots next month, the loose target set by a number of jurisdictions.

The District of Columbia was scheduled to begin inoculating restaurant workers on Monday, but the start-up was delayed by the massive snowstorm that socked the East Coast. Berry expects restaurant workers to start receiving the shots as early as this week.

The District gave restaurants a green light to reopen 25% of their dining rooms for indoor service on Jan. 22, after suspending on-site dining in part because of potential social unrest during the inauguration on Jan. 20 of President Biden.

Berry voices hope that other operators will follow Knead’s lead and incentivize their staffs with PTO to get the vaccines. Widespread inoculation would reassure jittery consumers that restaurants are safe to frequent again for an onsite meal.

“Guests would be more comfortable coming out to eat if they knew that 95% of the industry’s employees were vaccinated,” he says.

Berry raises the possibility of turning widespread inoculations into a marketing advantage—for Knead’s restaurants as well as the whole industry.

“If we get to a number that we’re proud of, we might slap a sticker on the front door that says ‘Our staff has been vaccinated,’” he says. “We’ll see how it goes.”

As for the industry as a whole, “there’s gotta be some way to make this happen,” he stressed. “Because even when we’re back at 100%, there are still going to be people who are afraid to come out and eat in our restaurants.”