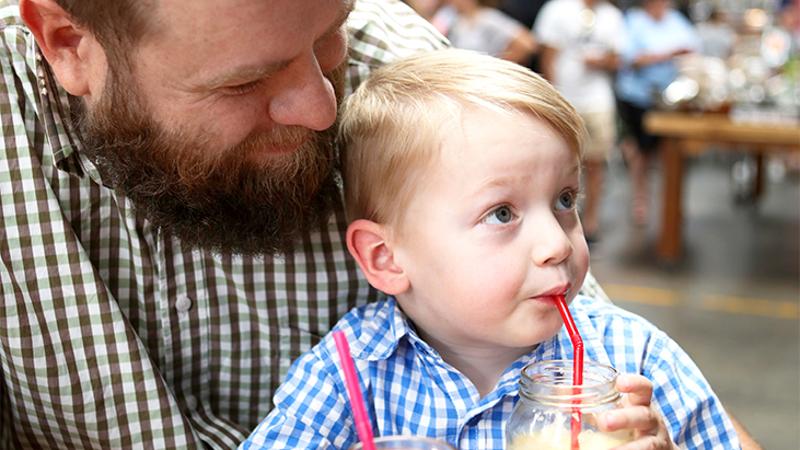 Restaurants have been courting millennials for years, but now the attention is shifting to their kids. As the influential demographic moves into parenthood, these young moms and dads are spurring restaurants to re-evaluate what’s offered on kids menus. Millennials want to make sure that their tots’ food is on par with their own expectations, so what is it that they want their kids sipping on when they dine out?

When millennials want to order healthy, they overwhelmingly look for claims of natural and organic on the menu, according to Technomic’s Healthy Eating Consumer Trend Report. Top chains such as Chick-fil-A and Subway have responded to this demand in the past year by rolling out an organic juice option on their kids menus. “Parents and guests are voicing their desire for cleaner offerings,” says Amy Wells, senior manager of kids and family marketing for Chick-fil-A.

The chain formed an ongoing parents panel a few years back, composed of 1,000 moms and dads from around the country, to help determine how it could better appeal to younger parents. “The group has been a great resource for us as we explore new menu items and other service strategies targeted specifically to meet their needs and their kids’ needs,” she says. And that includes drinks. Their feedback has been instrumental in Chick-fil-A’s kid-forward menu decisions this year, Wells says, including the removal of artificial vanilla from its chocolate milk in favor of natural vanilla.

Austin, Texas-based Torchy’s Tacos is serving up some of these in-demand “clean” drinks to parents and their kids—but it’s not going the juice route. While soda may have a negative rep, it doesn’t need to be completely ignored as an option for kids, says Mike Rypka, founder and owner of Torchy’s Tacos. “I think the parents like the fact that they can get a natural soda [at Torchy’s],” he says. “It doesn’t have a bunch of corn syrup and stuff in it. I think parents feel better about it.” Rypka says 80% to 90% of his guests who order kids menu items typically get a kids drink, which is filled up at the soda fountain.

“We believe that parents want to see options,” says Matt Abercrombie, Chick-fil-A’s senior menu development consultant. “We have our classics that kids and adults know and love … but we also have healthier options.” Millennials, more than any other generation, think choice is essential, including for kids, data shows.

Designed specifically as a place for parents to dine with their kids, two-unit Los Angeles restaurant Giggles ‘n Hugs offers a line of noncoffee coffeelike beverages so children can drink just like mom and dad. In addition to a basic hot chocolate, the restaurant offers Hot Giggles (steamed milk, vanilla and cocoa), Hot Hugs (steamed milk with honey, cinnamon and a marshmallow), ice-blended chocolate with organic chocolate milk and ice-blended creamsicle drinks.

While most restaurants stick to soda, juice and the occasional milkshake, shaking up the menu can stir up some excitement.