Continue to Site >>>
Edit
Photograph courtesy of The Melt

March 17 was a day of celebration at The Melt.

The seven-unit fast-casual sandwich chain had weathered struggles over the past decade. But the San Francisco-based concept had just logged 100 weeks of positive same-store sales. It had three units in various stages of construction. And, according to CEO Ralph Bower—a former Popeyes president—there was an acquisition in the works.

“Also on March 17, the mayor of San Francisco announced the shelter-in-place,” Bower recalled. “And on March 19, they announced a shelter in place for the whole state of California. We went from 100 consecutive weeks of positive comps to comps of negative 60% pretty much overnight.”

The story of The Melt is like those of many growth brands right now. One day they were focused on growing revenue and adding units, and the next? Survival.

Here are some of their stories. 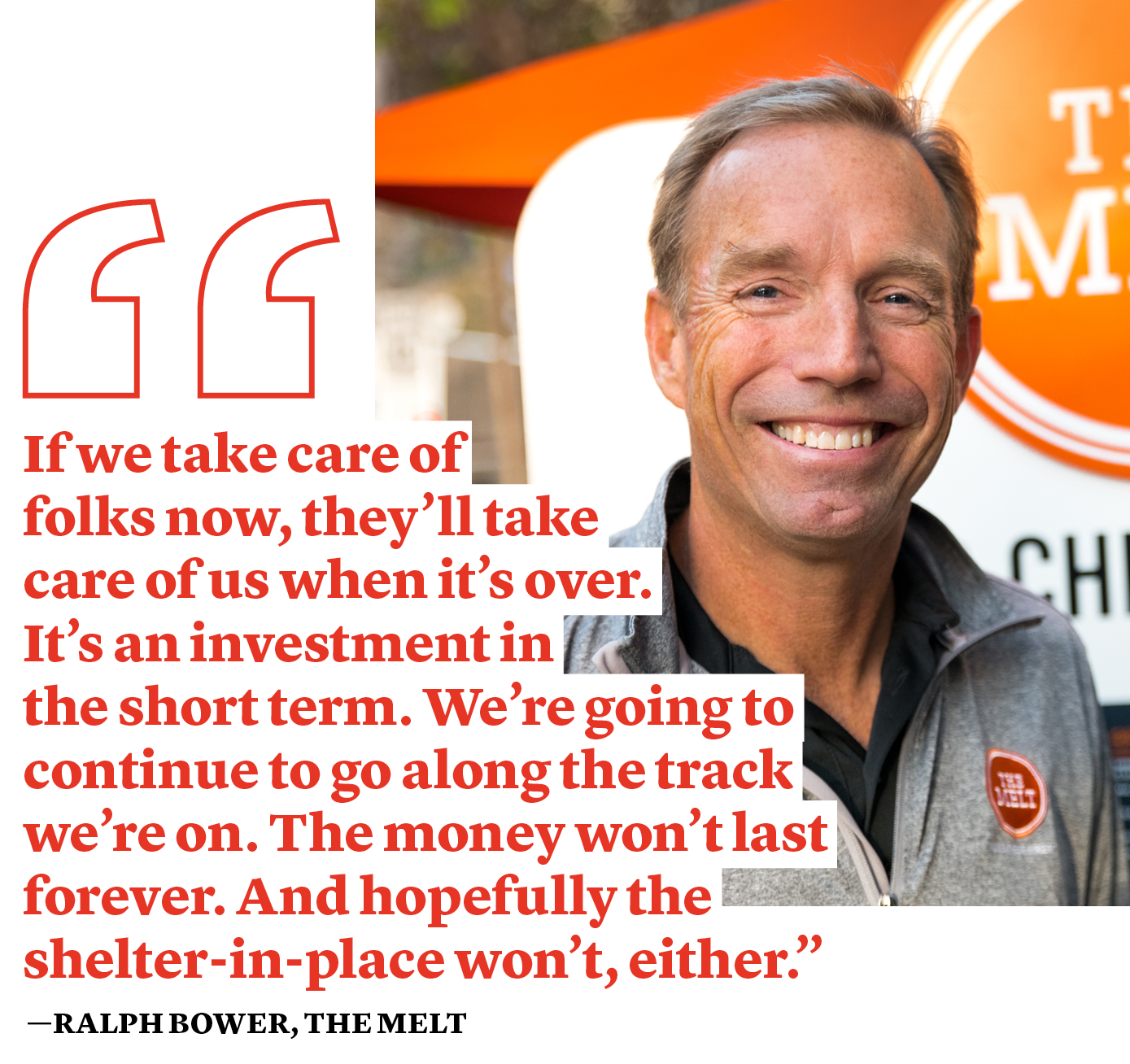 After that moment of celebration, The Melt went into survival mode.

Bower wanted to make sure his 140 employees would be OK. So he penned what’s now known internally was the “We have your back” letter.

“I thought about the teams and the team members that had helped us through,” Bower said. “I wanted to make sure they were taken care of. I knew there was a lot of people concerned about being able to pay their bills. I sent a letter out to the whole team and I committed to all that not only would no one be furloughed or let go, we would pay them what they were earning through the year, even if you can’t work because you’re sick or taking care of someone who’s sick.”

There were some concerns that people just might not show up for work after hearing they would still get paid. But Bower said that has not happened.

The Melt also started giving out free meals to any front-line first responders. So far, the chain has donated about 8,000 meals—nearly $100,000 worth. The efforts have been shared widely across social media.

“I wanted to show our appreciation, but it also gave our team members a feeling they were doing something that made a difference,” he said.

Bower said the chain’s partners have stepped up to help with funding the efforts and that The Melt has applied for federal aid but hasn’t seen any checks yet.

“It’s been an eye-opening experience,” he said. “It made me rethink my banking relationships, when I look at how I was treated by the bigger banks.”

With some of his restaurants seeing sales plummeting 80% to 90%, temporary closures were up for consideration. But Bower didn’t want to shut anything down.

“It was like keeping the engine in the car running, letting it idle so that when things pick back up, we’re ready to press on the accelerator and take back off,” he said. “At least having some people in the restaurants right now breathes some life into the restaurants. I’m afraid once you shut them down, they might not reopen. We’ve made the calculated risk that even though sales are way down, we’re going to keep the restaurants open.”

The Melt started offering delivery in April of 2018. Before the COVID-19 pandemic, it made up 20% of sales. Now, it’s about 80% of the chain’s business. The concept has also launched curbside pickup.

The company has added tamper-proof seals to all of its to-go orders and has beefed up its order-accuracy process.

“If we take care of folks now, they’ll take care of us when it’s all over,” Bower said. “It’s an investment in the short term. We’re going to continue to go along the track we’re on. The money won’t last forever and, hopefully, the shelter in place won’t either.” 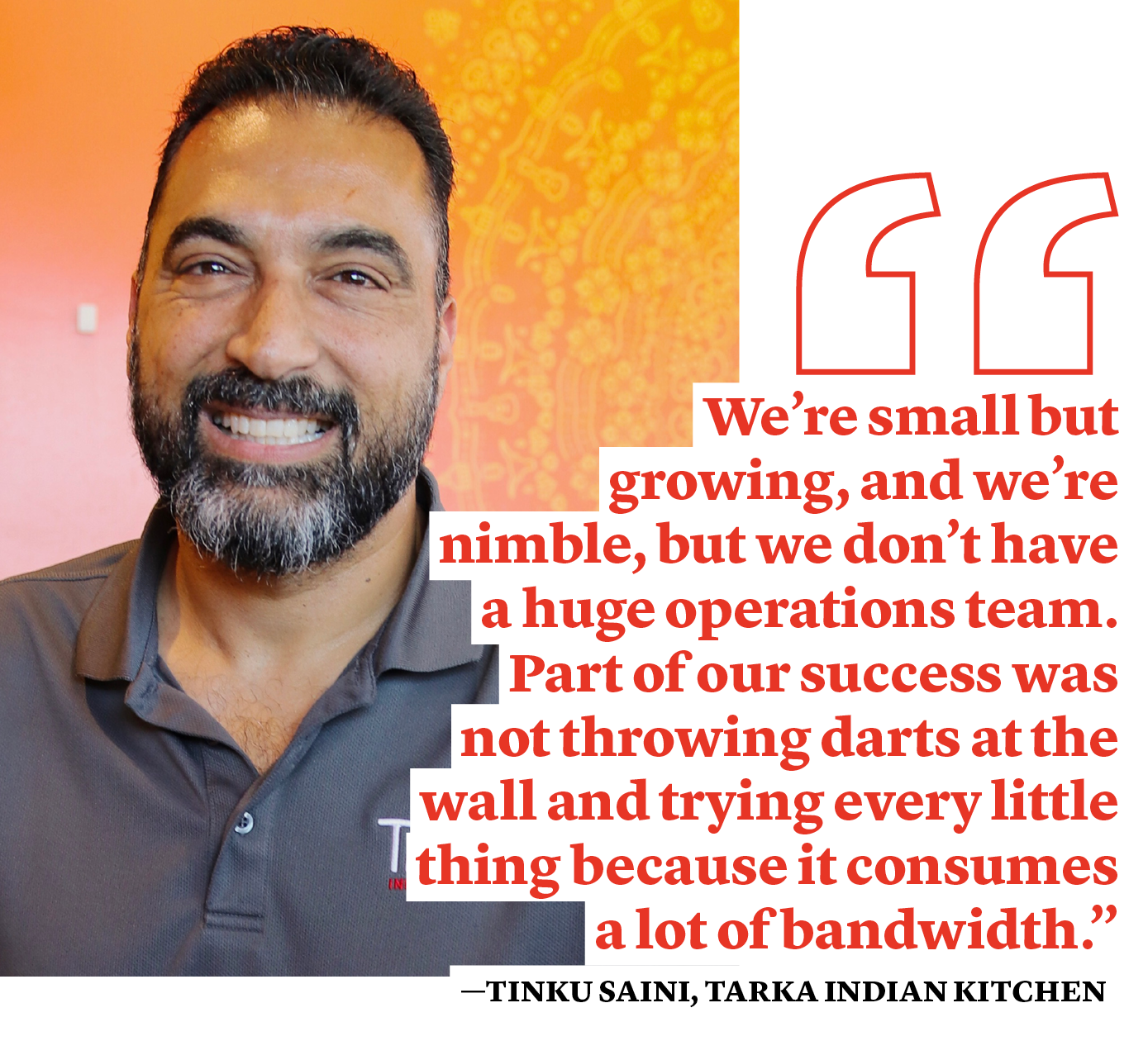 “It’s imprinted in my head,” said Saini, who founded the Indian fast casual in 2007.

So he did the math and looked at the two costs he could control: hourly labor and the cost of goods sold. He worked to get those two factors in line with sales, which are down 8.4% for the past five weeks compared to the same period last year.

All of the chain’s nine units remain open, and the business has been approved for Paycheck Protection Program (PPP) funding.

“That gave us a lot of comfort in being able to bring back people more freely,” he said.

While other restaurants tried new offerings during the crisis, including selling groceries and meal kits, Saini opted not to do any of those things and instead focus on boosting throughput and increasing safety.

“We contemplated a lot of those,” he said. “We’re small but growing, and we’re nimble, but we don’t have a huge operations team. We’re not throwing darts at the wall and trying every little thing because it consumes a lot of bandwidth.”

Last year, Tarka added a rewards program, which had enrolled 30,000 members before the crisis hit.

“That has allowed us to communicate to 30,000 of our most hardcore, loyal fans,” he said. “And we can send out little incentives to people.”

Tarka is also focusing on encouraging customers to order directly from its website instead of from high-commission third-party services. Currently, 70% of consumers are ordering through the restaurant, he said. 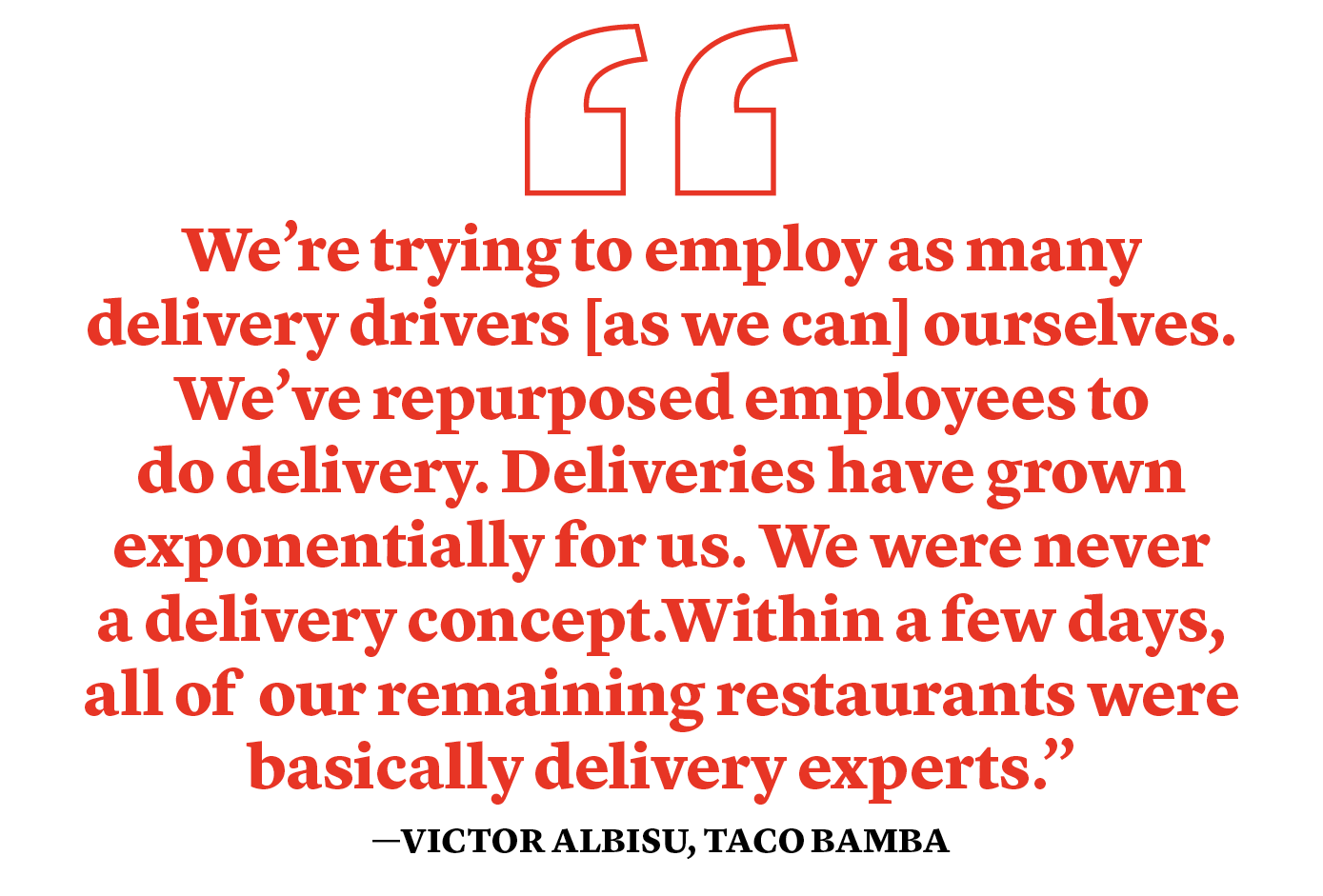 With half of its revenue coming from dine-in traffic and another 10% from catering, Taco Bamba took a devastating blow when the coronavirus hit.

The five-unit taco chain had to close one store in downtown Washington, D.C., and lay off 100 people.

“It’s a tough thing to think about,” chef-owner Victor Albisu said. “I think about every single one of them every single day. We are a little hard-hitting company, and people are the reason for it. It’s a hard one for me.”

Currently, the restaurant’s sales are down 18%.

The business has conserved some jobs by redeploying restaurant workers as delivery drivers.

“Delivery has grown exponentially for us,” Albisu said. “We were never a delivery concept. Within a few days, all of our remaining restaurants were basically delivery experts.”

Taco Bamba has also started a neighborhood drop-off program, through which five to eight orders are delivered at once.

“That has been extremely beneficial,” he said. “One neighbor spearheads it, puts a table out. The neighbors pick up their food. It just becomes a meeting place, from afar, from a distance. People can at least smile at each other and wave. It’s been an amazing boost to the business. It’s based in community. It’s based in our fans and our followers.”

“It’s a very strange environment,” he said. “The ticket machines are pumping constant tickets, but there’s no one in the store. It’s honestly a surreal experience.” 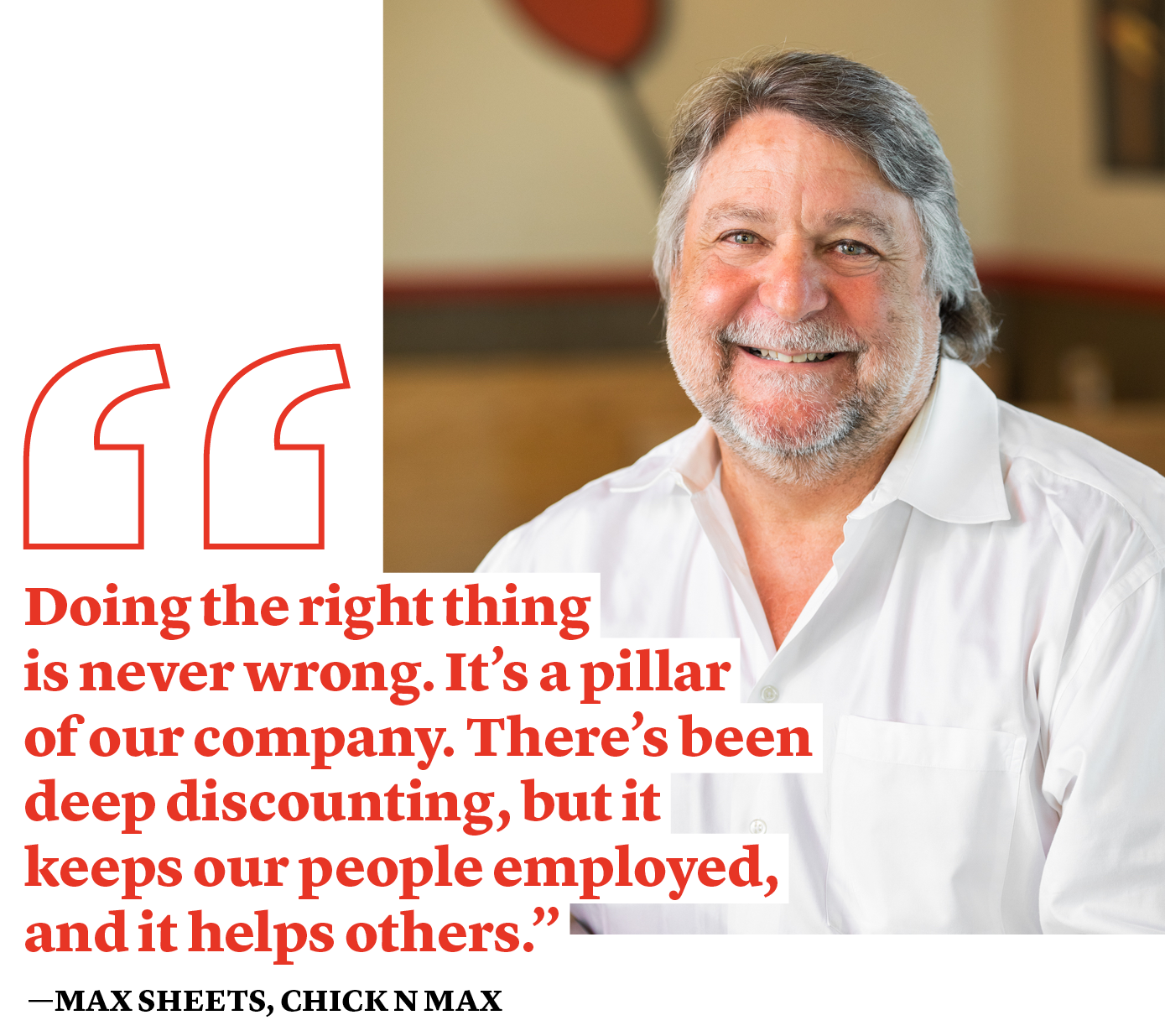 One of Chick N Max’s company mottos has guided the three-unit chain’s actions during the coronavirus crisis, according to founder and CEO Max Sheets:

To that end, Chick N Max closed its dining rooms a week before it was mandated in Kansas. It rolled out $2 boxed meals and started delivering dozens of free meals each week to a shelter and offering up more free meals to unemployed hospitality workers.

The restaurant has received PPP assistance for its 70 or so employees.

“We’re the poster child for that program,” Sheets said. “It has made a huge difference for us.”

Sheets is making plans for reopening his dining rooms, removing every other table and putting tall dividers on booths.

In the meantime, he is shelving current expansion plans while remembering that “this too shall pass.”

“There’s going to be available real estate, which is going to create opportunities,” Sheets said. “We’re going to make sure we set ourselves up to capitalize on that.”

The current crisis has created plenty of challenges for Las Vegas-based Pinkbox Doughnuts. But the three-store chain is still focused on growth.

All 10 units that were in development pre-pandemic continue to move forward, CEO Stephen Siegel said.

“Of the ones we’re working on now, several are drive-thru locations, which is going to help us even more,” Siegel said. “These things are unfortunate, but we won’t let it stop us.”

Pinkbox’s regular business has not dropped, but its wholesale business has dwindled, Siegel said. So the doughnut chain has devised some new options to boost sales.

The restaurant has added a DIY doughnut decorating kit.

“That’s done extremely well while kids are home,” he said.

And the chain’s efforts to hand out free doughnuts to first responders, more than 15,000 so far, has yielded lots of positive social media posts.

Pinkbox is slowly starting to develop its own delivery operation. And it is using its in-house sales department to help with larger orders to hospitals, assisted living centers and deliveries to individual employees from larger businesses.

The bakeries are handing out doughnut menus so customers can look at them while they wait in (socially distanced) lines and speed the ordering process once inside the stores.

“We have added four more doughnuts to the 60 doughnuts we carry all the time,” Siegel said. “We don’t want people standing there. Normally, we’d have a line inside the store.” 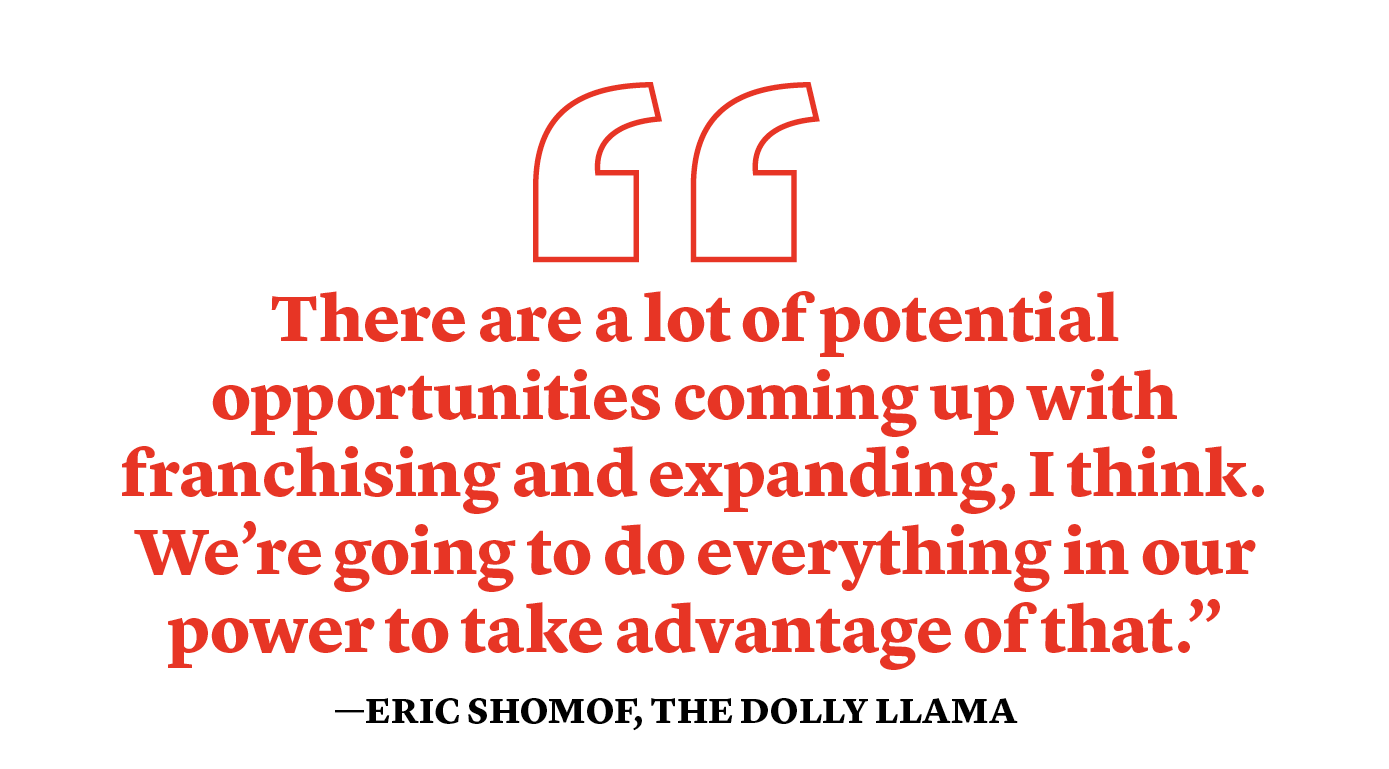 The Dolly Llama, a three-unit dessert concept in Southern California, wasn’t sure it would remain open amid the coronavirus pandemic.

“I asked the employees,” co-founder Eric Shomof said. “’It’s up to you guys. What do you want to do?’ We’re surviving. We’re doing well online.”

Once California’s stay-at-home order went into effect, “That changed everything,” Shomof said.

But the restaurants have seen an uptick in interest from families, looking for some comfort and fun during this crisis.

The Dolly Llama has kept on 18 employees and recently received PPP funding.

One of the biggest challenges has been educating customers to distance themselves from employees and not touch unnecessary things in the stores, he said.

“When you have a small location with only four or five tables, that’s difficult,” he said.

The concept is promoting delivery via social media.

“When the deliveries go out, our employees started adding thank-you notes saying, ‘Stay safe and thank you for supporting us,’” Shomof said. “We’ve done little sticker giveaways, just to try to keep people happy in this crazy time. We’re really hoping that once everything comes back to normal, we can go back to the older numbers we used to have in-store plus the delivery numbers we have now.”

For now, growth is on pause.

“We’re technically franchise ready to go, and then this whole thing happened,” he said. “We’re just taking a little pause. We’re holding off and seeing where things go with that. There’s a lot of potential opportunities coming up with franchising and expanding. I think we’re going to do everything in our power to take advantage of that.”