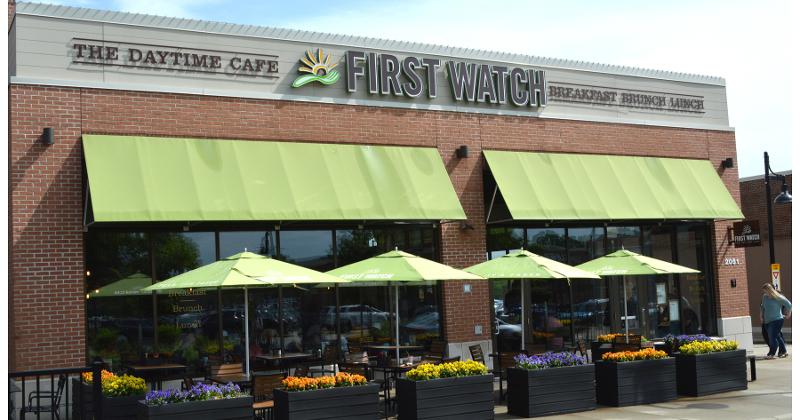 To date, they explained, that’s meant forgoing price increases, be it for dine-in service or third-party deliveries. Nor has the brand trimmed its menu or hours, the usual countermeasures to soaring food and labor costs.

Instead, the breakfast-and-lunch concept intends to bolster profits by focusing on improving the margins of its new stores, which “have really broken out of the gate hot,” CFO Mel Hope said on Day One of the investment conference. Through word of mouth and “discovery” of the brand by the unfamiliar, those additions typically exceed the $2 million average annual sales volumes of First Watch’s “legacy” stores, he revealed.

Yet “ironically, it’s not resulting in any sort of honeymoon curve,” said CEO Chris Tomasso, referring to the tendency of new stores’ sales to slip as the units’ newness wears off.

First Watch intends to keep profits growing in large part by improving the profitability of those new stores, Hope indicated. He revealed that mature First Watch restaurants usually keep about 19% of sales, compared with the 17.7% margins of the younger operations.

That disparity is no accident, said Tomasso. Staffing is usually deeper at a store that’s introducing itself to a new market, with fewer tables per server station.  The idea is to wow them on early visits to make them customers for life, he explained. Hope noted that some customers visit a First Watch every day, often for the same breakfast choice.

The chain will look at ways of becoming more efficient now that those stores have secured a following, he continued, citing such un-sexy moves as switching to double dishwashers and extra-wide pancake griddles.

Both referred back to First Watch’s contrarian past, including its inception. From the get-go, the full-service operation decided to offer only breakfast, lunch and brunch, a result of the founders’ desire to play golf in the afternoons.

But that approach has proven an advantageous business strategy because only one labor shift is needed per business day to sustain sales of $2 million annually, the executives stressed.

The company has had three private-equity partners, and each of those initially questioned the wisdom of having a restaurant sit idle during the dinner daypart, the highest-volume sales and profit period for most restaurants, recounted Tomasso.

“To each of their credits, once they understand our model, [they realize] it’s a very compelling business model,” said Tomasso.

Because they can be home for dinner with their families, First Watch’s general managers currently average five years of tenure, and district supervisors have typically been with the chain 10 years.

All in all, Hope said, “the system is going to grow about 10% per year.”  He added, “that’s built on increasing traffic.”

For the fourth quarter ended Dec. 25, First Watch Restaurants posted preliminary same-store sales gains of 7.7% for the three months and 14.5% for the full fiscal year. Traffic slipped by 0.6% during the quarter but was up 7.7% for the year.

The chain opened 43 restaurants during 2022, 16 of them in Q4. It consists today of 366 franchised and company locations in 29 states.