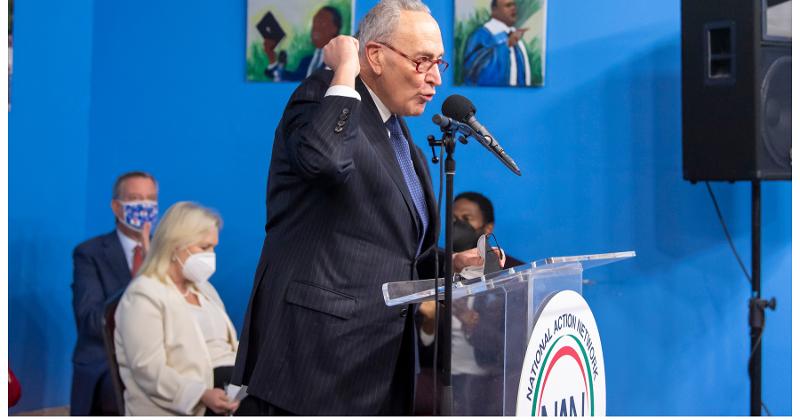 Senate Majority Leader Chuck Schumer (D-N.Y.) is expected to schedule a vote for next week on replenishing the Restaurant Revitalization Fund (RRF), the grant program that left 177,000 restaurant applicants without aid after distributing $28.6 billion in three weeks.

The bill, backed by the powerful Sens. Ben Cardin (D-Md.) and Roger Wicker (R-Miss.), would allocate an additional $40 billion in funding specifically for restaurants, with another $8 billion earmarked for other businesses that were hit particularly hard by the pandemic. Those other enterprises include gyms and minor-league sports teams.

The RRF’s administrator, the U.S. Small Business Administration, said at the time the program was suspended that it would maintain the applications and provide funding to restaurants in the order their requests for aid were fielded.

A bill to replenish the RRF with $42 billion in funding was passed by the U.S. House of Representatives in early April. It, too, calls for providing aid to the restaurants that failed to secure a grant before the program ran out of money.

Like the Cardin-Wicker bill, the House measure also allocates funding for businesses outside the restaurant business, in this instance, $13 billion. The legislation specifies that any money left over from that $13 billion would be used to provide aid to restaurants that didn’t apply for an RRF grant during the first go-round.

Officials of the industry have warned that tens of thousands of restaurants will likely be forced out of business without the federal aid. That assertion holds that many operators have failed to rebound fully from the pandemic and many are struggling today to make rent and debt-service payments that were deferred while dining rooms were closed to slow the spread of coronavirus.

But that warning of widespread carnage has been disputed by many in and out of Washington, D.C. Even the White House has disparaged the need to allocate more money for the RRF, saying the restaurant industry got its direct aid through the first go-round.

For the Cardin-Wicker bill to fly, it would need the vote of 50 senators to pass, even if the filibuster rule was suspended. Chances of merely getting all 50 Democrats in the Senate to vote aye are viewed as slim.

Other opponents say a bump in direct aid would add topspin to a historic rate of inflation, which the White House said Tuesday is now the nation’s most pressing economic problem.

“Taming the upward spiral of prices is requiring aggressive intervention from the Federal Reserve to raise interest rates and sell its bond holdings, with all the inherent risks of recession,” the Chicago Tribune said in an editorial that aired today. “Shelling out new federal aid would only undermine that effort and make inflation harder to address.”

“While we sympathize with all business operators who struggled to cope with COVID-19, another relief act for restaurants, bars and similar public venues is too much. The time for new federal cash outlays is over,” the editorial asserted.

For those reasons, lobbyists are reserved in their assessment of the Senate bill’s chances. Still, the National Restaurant Association, the Independent Restaurant Coalition and other industry groups are urging their members to press their senators for yea votes.

"We have resisted saying 'this is the week' to you for almost a year now, but it is truly accurate this time," Sean Kennedy, EVP of public affairs for the National Restaurant Association, said in an email to the group's membership. "Everyone in Washington knows the need for replenishing RRF, but they need to hear your urgency to make it a priority."

CORRECTION:  An earlier version of this story said that Sen. Krysten Sinema (D-Ariz.) had indicated she would vote against a re-up. Her office says she has not made such a declaration.