When fusion was the trend of the moment, some chefs tried too hard to globalize menus. In too many kitchens, the result was confusion—on the plate and the palate. 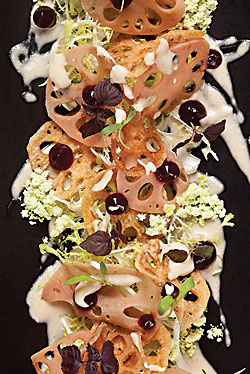 These days, fusion has morphed into what some refer to as “smashing.” Ida Shen, executive chef at UC Berkeley, demonstrated “smashing” through a Latin-inspired sope she created at a custom culinary event held at the CIA Greystone. Her Southeast Asian Citrus Sope with Baby Banana Almond Tempura combines two global cooking traditions in one dish without diluting the flavors or influences of either.

Other chefs are striving for authenticity and purity in their global menus, but tossing a few modern touches into the pot, too. Take a look.

Laguna Beach, California
Chef-owner Azmin Ghahreman traveled around the world in his former role as a Four Seasons Hotel chef. His favorite countries are those along the spice route in Northern Africa, Asia and the Middle East. “Spices inspire my cooking and my original idea was to follow the spice route with my menu at Sapphire,” he says. “But now I explore a bit more. Any time I visit a culture, I embrace it.”

To appeal to American diners, Ghahreman tends to tone down authentic dishes, incorporate modern techniques and ramp up presentation. When he does “fuse” cuisines, it’s more in line with the smashing idea described by Shen. Sapphire’s Kalua Pork Quesadilla, for instance, employs the Hawaiian technique of cooking pork in liquid (tea in this case), but the tender meat is served in a quesadilla with Oaxacan cheese, roasted poblanos and onions.

One of Sapphire’s signatures is its Spice Plates menu—Ghahreman’s take on small plates—served each day from 4 p.m. “Every dish represents a different part of the world and a different spice,” he notes. Items such as Fried Chickpeas with Harissa & Lemon and Shishito Peppers with Marcona Almonds & Romesco Sauce entice customers seeking lighter bites.

Although Sapphire’s menu is international in scope, Ghahreman sources fresh ingredients from local growers and producers. Spices and ethnic ingredients are supplied by Chef’s Warehouse and Ranch 99.

New York City
The Michelin-starred Junoon is billed as a traditional Indian restaurant, but the dishes look anything but traditional in the hands of culinary creative director Aliya Leekong. “We stay traditional in terms of flavor profiles but play a lot with technique,” she reports. “Instead of stewing, we’ll do a French braise, a technique that defines the ingredients instead of hiding them.” And those ingredients are high-quality—sustainable proteins and organic produce with lots of attention paid to seasonality. This spring, Leekong is incorporating produce such as fiddleheads, peas and rhubarb into Indian dishes even though these aren’t typically Indian.

Junoon’s tasting menu exemplifies the restaurant’s modern approach. “We’re creating what the next generation of Indian cuisine will look like, with emphasis on presentation,” says Leekong. Lotus Root Three Ways is a case in point: some of the lotus root is sliced ultra-thin and fried crisp, some is pureed with Indian spices and the remainder is pickled.
Leekong is not a fan of “fabricated fusion” but points out that fusion comes naturally at Junoon. “India is an amalgam of cultures. The authentic cuisine has roots in many places.”

Broomfield, Colorado
The menu at Noodles & Company has always spanned the globe, categorizing items under Asian, Mediterranean and American headings. Corporate chef Tessa Stamper wanted to expand that platform but found that customers were hesitant to get out of their comfort zones. Instead of adding new ethnic dishes right off the bat, Noodles decided to scrap those original headings and rename its menu “Your World Kitchen.”

“It’s more of a navigation tool to present our menu in a different way,” Stamper explains. “The items themselves haven’t changed, but guests think they have. Without the boundaries of Mediterranean, Asian and American, customers are more likely to explore.”

Noodles’ goal is to maintain the integrity of its dishes while broadening their appeal. “We’re one standard deviation away from the original,” says Stamper. “This makes it more familiar to guests but still recognizable as authentic.” That striving for authenticity is underlined by Noodles’ purchasing practices. Both foreign and domestic products are sourced. For example, the udon comes from a noodle house in Brooklyn, New York, for the menu’s Japanese Pan Noodles. “We worked with them to get just the right texture so the udon absorbs the pan sauce perfectly,” she says. The sesame oil base for the pan sauce, on the other hand, is from Japan; it offers the best flavor and caramelization.

“Your World Kitchen” opens up new opportunities for Stamper, too. The cuisines of South America, Korea and Morocco are currently on her radar.