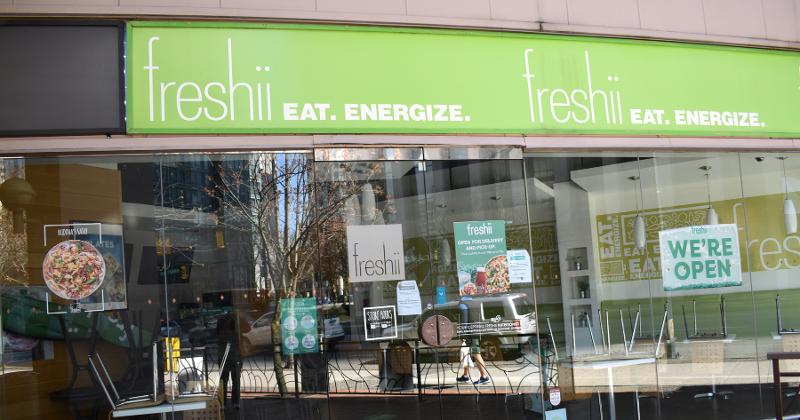 Toronto-based healthy eating brand Freshii, which has struggled during the pandemic amid a slow urban recovery, promoted CFO Daniel Haroun to CEO, while founder and CEO Matthew Corrin becomes executive chairman of the chain’s board.

Freshii, which operates franchised and company-owned restaurants, as well as a packaged goods retail business, said the leadership change would better allow it to reach its “full omnichannel potential.”

“I want Freshii to have intergenerational relevance for our customers, our team members, our franchise owners and our shareholders, and I believe this vision will be best realized by transitioning responsibility for the day-to-day leadership of the company to Daniel and the incredible team he has today and that he will continue to build around him,” Corrin, who founded Freshii 17 years ago, said in a statement.

Victor Diab, who has more than a decade of finance and strategy experience at large Canadian public companies, has been hired as the chain’s chief financial officer.

Haroun joined Freshii in 2019 after spending three years as VP of finance for Walmart-Canada and eight years in finance at Restaurant Brands International.

“Our industry’s current operating environment brings both opportunity and challenges and I am excited to work closely with our incredible franchise partners, team members and supplier and retail partners to position our business to embark on Freshii’s next chapter of omnichannel growth,” Haroun said in a statement.

For its first quarter, Freshii reported 5.4% same-store sales growth in its North American franchised restaurants, noting the impacts of omicron were more acute in Canada than in the U.S.

A limited-time offer of soups boosted sales early in the quarter, but that impact was “muted,” the company said, by ongoing supply chain challenges for key ingredients.

Restaurant operating hours for the 344-unit chain were down about 10% during the period, compared to 2019.

“Also impacting sales has been a ‘return to office’ timeline that is progressing at a slower rate than anticipated, with both suburban and downtown-based employers in key markets seemingly taking a very measured approach to the reintegration of in-person work,” Freshii said in a statement.

Freshii reported revenues in the first quarter of $7.4 million, compared to $2.8 million the year before.