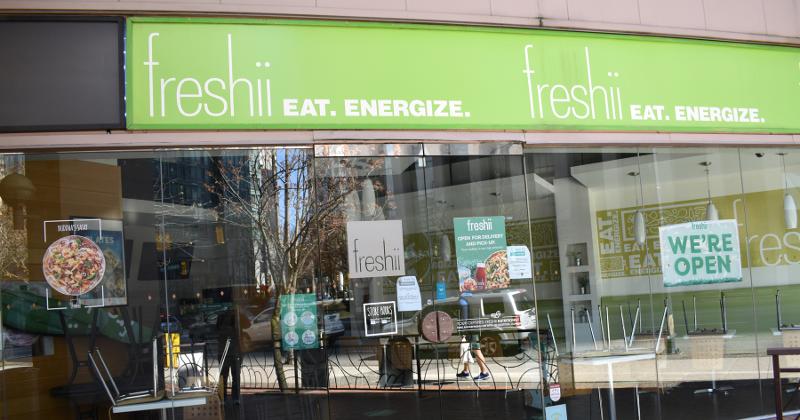 Toronto-based fast casual Freshii continues to lag far behind its pre-pandemic sales, particularly in big city markets such as Chicago and Canadian urban areas, the chain reported this week.

For the quarter ended Sept. 27, Freshii’s same-store sales rose 10.6% over the previous year. But same-store sales remain down 20.1% over 2019 numbers. Suburban stores, about 55% of the chain’s North American portfolio, have recovered to more than 90% of pre-pandemic levels,” CEO Matthew Corrin told analysts.

“What we found is with our suburban locations that have a mix of residential and retail-related traffic, we do continue to benefit both from the lunch daypart, but also afternoon and diner dayparts as well,” CFO Daniel Haroun said on the earnings call. “And so we’re optimistic that on the other side of the pandemic, we can continue to build out dayparts beyond lunch as well.

Freshii recently signed its largest franchising deal, partnering with U.S.-based Level Hospitality to open a planned 20 new units in Texas over the next six years.

During the quarter, Freshii opened eight restaurants, some of which had previously been listed as permanently closed during the pandemic. However, the chain closed seven units during Q3 and had 12 locations listed as temporarily closed. The chain ended the period with 372 restaurants.

The chain said it expects to open fewer new stores in 2022 than in previous years, as growth was paused to conserve resources during the pandemic.

“Building our restaurant and development pipeline, particularly in Canada and the U.S., continues to be an area that we’re focused on,” Corrin said.