"Success is never final," said Lon Southerland of Marriott International. But for one afternoon, he and three other foodservice professionals—from convenience stores to hotels—were honored for their innovative and, in some cases, aggressive takes on reaching consumers’ palates. 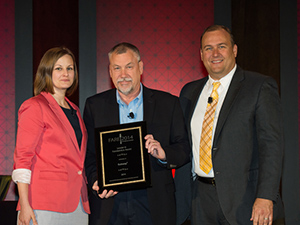 The winners of the 2014 Leaders in Foodservice Awards received plaques and applause in Grapevine, Texas, on Wednesday, the last day of FARE, a conference for executives from all channels of foodservice. This year’s winners were:

Here are some behind-the-scenes details of the concepts that earned them their awards.

Perhaps most impressive is the company's sheer reach, with more than 41,000 units in more than 100 countries today. Many locations are found in unlikely places, from a church that uses the franchise to teach job skills to local residents in need, to the Subway shop that rose atop the Freedom Tower in New York to feed busy construction workers as they added one floor after another.

“We’re in everything from airports to zoos—the A to Z of nontraditional locations,” Fertman said. “And it’s a great niche for us because we are very flexible and we can fit into just about any space. Give us 300 square feet and we’re there.”

When Marriott set out to remodel the lobby of its Courtyard brand, it learned that most guests were skipping the traditional buffet in search of something quicker and more modern. The resulting remodel changed the entire Courtyard experience—how guests interacted with staff members and each other and made the most of their stay.

“I think that really tells a lot,” Southerland said, “because over the 2008 timeframe when the economy was having some difficulty, we were really able to ramp it up and be poised for when the economy turned around, which is exactly what happened.”

Under Coltek, Kennesaw State University's dining department has created a program that upstages many others, especially when it comes to sustainability. Program highlights include making sustainability the program's backbone, from a closed-loop waste-management system to using product from three campus farms, and spearheading the creation of a new culinary sustainability and hospitality academic program at the university.

“We’ve seen a reduction in pre- and post-consumer food waste,” Coltek said, “daily saving 3,000 gallons of waters, diversion of waste from landfills, reduction of annual composting, diversion of cooking oil and increased participation of socially responsible behavior on campus. Our students get it.”

Hamza, working with CEO Peter Tedeschi and the rest of the convenience-store chain’s leadership, has helped develop a highly regarded foodservice program. Twenty-one of the chain’s c-stores feature full-blown delis that make sandwiches and salads to order. Other stores are served by the chain’s own commissary. Grab-and-go offerings range from a classic club sandwich to adventurous wheatberry and salads and heat-and-eat Indian entrees.

“It’s no longer enough to be a convenient location, you really have to do the things that make you a destination location,” said Tedeschi.

Hamza took it even further. “It’s been very difficult to change the perception of convenience stores,” he said during the FARE Conference. “We’ve made an enormous investment in our stores to improve both internal and external branding so they can house these new foods and new trends.”