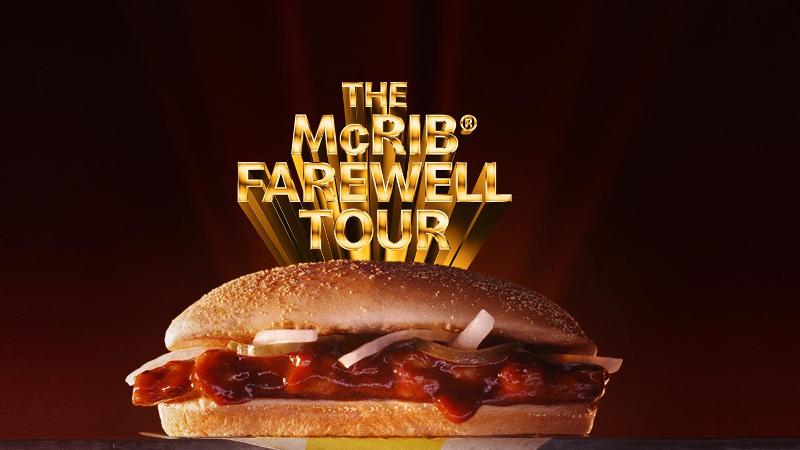 McDonald's is calling this a "farewell tour" for its McRib. It likely is working to bring back some mystery surrounding its return. / Photo courtesy of McDonald's.

McDonald’s said on Monday that it will bring back the McRib sandwich again this year, and this time the company is also bringing back an old marketing gimmick with it.

The company teased that this would be a “farewell tour” for the cult classic sandwich, suggesting that this just might be the last time that it would appear on menus.

That is unlikely and, indeed, a company release noted that, “like any true farewell tour, we’re hoping this isn’t a ‘goodbye’ but a ‘see you later.’ Because as our McRib fans have experienced time and time again: you never know when—or if—the McRib is coming back.”

Indeed, longtime McRib lovers may recall that McDonald’s held a “farewell tour” before. The company removed the sandwich from its permanent menu in 2005 with just such a farewell tour, going so far as to create a website for a fake association, the “Boneless Pig Farmers Association of America.”

It would return the next year and in subsequent years as a limited-time offer through 2012 when the McRib was demoted to a regional option to make room for other items, notably Mighty Wings. McDonald’s brought the McRib back nationally in 2020 and again last year.

The McRib is one of fast food’s strangest products. The boneless pork patty is shaped to look like a rack of ribs and is smothered in barbecue sauce. The sandwich is topped with onions and pickles on a bun.

It was first introduced to the national menu in 1981 but was later pulled due to poor sales. It returned in 1989 and would come back annually until 1995 when the company added it to the permanent menu, where it stayed before that farewell tour in 2005.

The product has had a cult following for years and was mocked in a Simpsons episode. At least part of that cult following has been the mystery of when or if the sandwich would return. McDonald’s appears to be working to tap into that curiosity, suggesting that while it may come back, we don't know when.

In any event, because this is 2022 McDonald’s will be selling merchandise along with the McRib. The merchandise will be available on the company’s online shop starting Nov. 4.