McDonald’s is going big with its next celebrity-endorsed meal: BTS.

The Chicago-based burger giant, which kicked off its series of meal promotions last year with the hugely successful Travis Scott Meal, is hoping to get a global boost by linking a meal with the hugely popular Korean boy band. 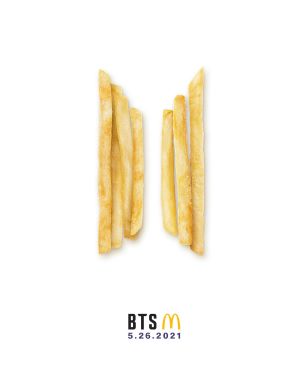 The meal will feature a 10-piece Chicken McNuggets, medium fries, medium Coke and Sweet Chili and Cajun dipping sauces inspired by recipes popular in South Korea. “The band has great memories with McDonald’s,” Bighit Music, BTS’s label, said in a statement. “We’re excited about this collaboration and can’t wait to share the BTS Meal with the world.”

McDonald’s Famous Orders promotion kicked off last year with the Travis Scott Meal—a promotion that would prove so popular the chain would run out of beef and other ingredients at some locations. The company has since followed it up with J Balvin. The campaign has been credited with helping speed the chain’s recovery from a pandemic-related sales decline.

BTS is the most popular band in the world at the moment, and McDonald’s will be promoting it around the world, starting with the U.S. and several other countries on May 26. The company will introduce the meal in nearly 50 countries in late May and early June.

BTS is a seven-member boy band that has become the best selling artist in South Korean history and is now a global powerhouse. Seven of the 10 most popular albums on Billboard’s World Albums Chart belong to BTS and its video for the song Dynamite just broke two world records, including the most viewed YouTube video in 24 hours.

It also has a legion of devoted fans around the world.

“This is much more than a traditional promotional campaign,” McDonald’s Chief Marketing Officer Alistair Macrow said in a message to the system on Monday. “We’re tapping into McDonald’s key strengths to bring it to life.”