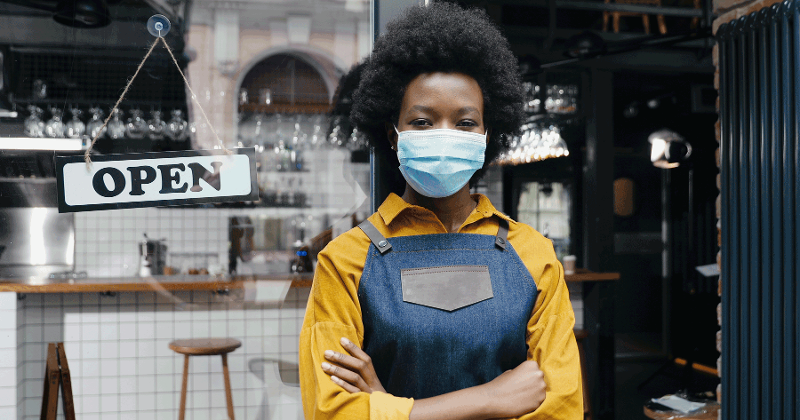 Would restaurants push to keep dining rooms open even if science showed the sales benefits would heighten health risks?
Let’s rephrase this one in starker terms: Would the business push profits over public safety? No matter how the question is phrased, it’s a discomforting one the business should answer carefully if it doesn’t want to emerge as the next tobacco industry, more intent on protecting sales than the health of guests and employees.

A fully formed answer wasn’t provided this week, but we were concerned about which way the industry seemed to be leaning—the key word there being “seemed.” A new study tarring restaurants and Starbucks-type places as “superspreaders” drew intense criticism based on a painstaking dissection of the methodology. Those faults are likely too subtle to sway a public that’s preoccupied with staying alive. Consumers hear that restaurants are denying the danger they pose, if the industry’s objections to the Stanford University report are heard at all.  Whether the assumption is true or not, they see restaurants pushing for sales even if that means more people will get sick and die.

The public isn’t likely to be reassured by the civil disobedience that’s become a point of pride to many restaurants. They’re smugly flouting the safety measures imposed by health experts, as if they can scare away the coronavirus by daring it to strike. Those non-abiders could be ruining it for everyone by forcing another round of dining-room shutdowns, an option already on the table in several states.

The industry would be better served by accepting any identified risks, negating them, and then explaining to the public with complete credibility that no reasonable effort or expense is spared to keep them safe. Pinky-swearing that restaurants really are harmless is less impactful than making sure they truly are.

Will the industry see another stimulus package in short order?
Don’t count on anything until January, or at least that’s what politicians, economists and commentators are saying. Where they stop short is indicating when in January that help for the industry or its customers might come, before Joe Biden becomes our president or right afterward. They acknowledge that predicting action is nearly impossible because President Trump hasn’t revealed his priorities for the time he has left in office. The outgoing chief had pledged beforehand that he would push through some sort of relief measure immediately after the election, but there have been no signs that’s on his to-do list.

One possibility that’s already been raised by a health advisor to President-elect Biden, Michael Osterholm: Shutting down the economy for four to six weeks in the first quarter to flatten the current wave of coronavirus infections, with hard-hit industries and their employees directly compensated for the income they lost during that nationwide quarantine.

What the heck is “cuffing”?
Being of a certain vintage, we had no idea until Chipotle announced its current joint promotion with Uber Eats and Hinge, which was likewise a blind spot for persons who remember rotary-dial payphones.  But it’s a term that may be heard more often as restaurants look for ways to capture off-premise business from courting couples.

Cuffing refers to a hookup through the winter of persons lacking significant others to keep them warm and hugged. Hinge is the dating app that helps them find the candidates. The app has added a feature that allows singles hunting for a date to see how their Chipotle preferences align with those of their potential prey.  Think Valentine’s Day, but across a four-month stretch known as Cuffing Season.

Chipotle is introducing a new online-only menu of delivery meals to feed the lovebirds as they test the feasibility of remaining a couple until the weather starts to warm in March. The notion is to provide a first-date meal that could lead to a second get-together.

It’s a racy approach that many operators may be analyzing for their own promotional opportunities.

Does Anthony Fauci not like restaurants?
Like President Trump, the restaurant industry has had a love-hate relationship with the nation’s leading expert on infectious diseases. Operators cursed him when he floated the idea back in March that restaurants should be forced to suspend dine-in service to slow the spread of coronavirus, a notion dismissed at the time as radical, unfeasible and downright ludicrous. They weren’t too happy with his recommendations that anyone even walking past a restaurant be wearing a mask.

But Fauci, it turns out, is a closet restaurant fan who feels an obligation to help the industry weather the pandemic. “I feel badly about restaurants losing business,” the director of the National Institute of Allergy and Infectious Diseases told CNBC.  “And I feel it’s almost a neighborly obligation to keep neighborhood restaurants afloat.”

The doctor revealed that he purchases takeout meals for himself and his wife several times as his own micro-stimulus effort.