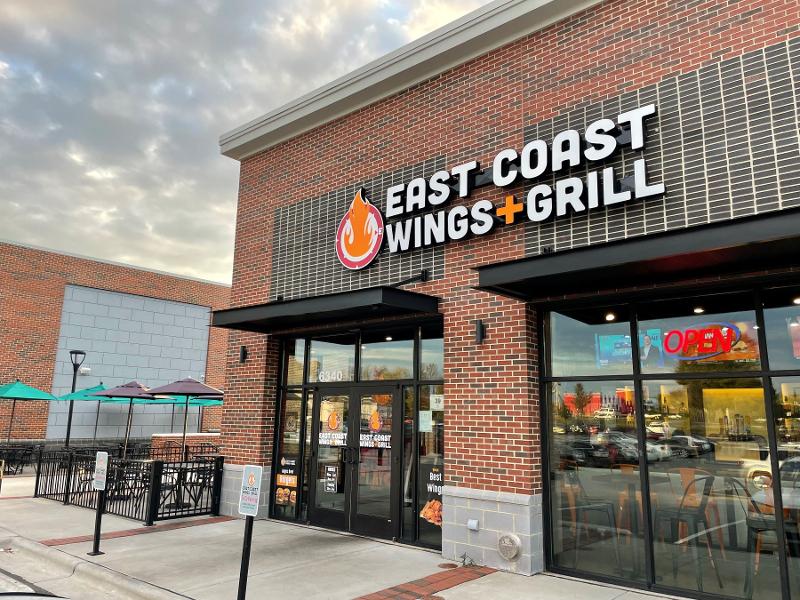 “I have been extremely patient with the brand,” Ballas said of the now 34-unit wing chain.

Some big changes are in store for the concept, though. Ballas has been experimenting with a small footprint, fast-casual service prototype and is seeing solid sales. He is also testing a smaller restaurant, with more of a full-service operation.

It’s part of a reimagining of East Coast Wings, which started six years ago. The chain’s restaurants were averaging between 4,500- and 5,000-square-feet and construction costs were rising.

“I thought that was the wrong direction,” he said.

So, he and his team started looking at how to shrink the stores to about 3,000-square-feet while still sustaining its average unit volumes.

A smaller store with a pared-down menu didn’t work. Customers “felt dysfunctioned when they went to the mini-me store,” Ballas noted. “There were things we didn’t have.”

So, in September 2020, Ballas opened a 2,290-square-foot version of East Coast in Clemmons, N.C., with the chain’s full menu in a full-service model. In another location, he’s testing an order-at-the-counter service model.

He has found success with the smaller footprint.

The smaller store does have a slightly smaller menu—42 items as opposed to 60 in the full-sized locations—but there has been little to no customer pushback.

“I know that casual dining across the board is trying to figure out how to shrink,” Ballas said. “I do think the consumer side of things has been altered and it’s going to be altered forever. This is the new way of eating.”

Indeed, a variety of full-service chains have rolled out fast-casual prototypes in recent years, including Flip’d from IHOP and Hoots by Hooter’s. The smaller size and limited-service model allow restaurants to find nontraditional real estate and operate with reduced staffing—two things that have become even more critical amid the pandemic.

East Coast Wings has seven new locations in the pipeline for 2022, all of which will be a smaller footprint than the traditional full-service restaurants. Franchisees can choose whether to go full fast casual, with diners ordering at the counter and food runners bringing dishes to the table, or they can have servers take orders, he said. By 2023, Ballas said, he plans to have 50 locations.

“It’s time for us to show the marketplace that after 15 years, we are ready to go with being the leaders in unit-level economics,” he said.