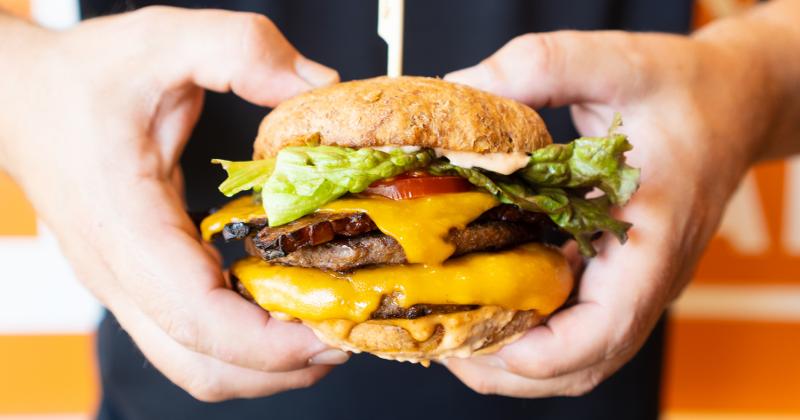 As the arena of plant-based burger concepts becomes ever more crowded, Next Level Burger is hoping to rise above the competition with a focus on sustainability, organic ingredients and aggressive growth.

And the brand may have a bit of an edge in the field of plant-based burger chains. After all, they were the first, according to Matthew de Gruyter, the chain’s co-founder and CEO.

De Gruyter and his wife, Cierra, opened Next Level in 2014 with the intention of sharing what they were doing as a family with the world.

“There were just a couple of plant-based, multi-unit chains in 2013, and no restaurants that were committing to organics and to non-GMO and certainly not to living wages,” he said. “And we decided to put them all in one package and see if we can make that work. And fortunately, not only were we able to make it work, we were able to make it work in such a way that it’s class leading.”

Next Level menus a variety of burgers, fries and shakes that call to mind the comfort classics. Its plant-burgers feature analogues from beef to fish, and diners can top their fries with options such as plant-based chili and cheese.

“What we were looking for when we started Next Level Burger was an all-American reinvention of the burger joint for the 21st century. So, we have a full spectrum of offerings from that craveable, greasy-feeling—without the grease—burger, to the other side of the spectrum of 100% whole foods-based, organic veggie burger experience and everywhere in between,” de Gruyter said.

The Oregon-based fast casual had 9 locations as of 2022, and de Gruyter said the company plans on quadrupling its unit count by the end of 2025. The chain saw $7.2 million in sales in 2021, according to market researcher Technomic, increasing 18% from the year prior.

“The caveat to that and to our macro approach to growth is that our focus has been on growing as aggressively as we can do so wisely,” he said. “I see no reason why America’s first plant-based burger joint can’t be a thousand locations or more, whether that takes us 10 years or 30.”

A focus on sustainability

Sustainability is another key aspect of the brand. In addition to its plant-based ingredients, the chain has committed to using 100% compostable to-go ware.

“We’re in a position where we are literally every year stopping hundreds of millions of gallons of fresh water from being used unnecessarily. And on top of that, we’re stopping millions of pounds of carbon emissions every single year from going into the atmosphere,” he said. “So, when it comes to eco-friendly, when it comes to sustainability, these aren’t green washed or even the best well-intentioned initiatives—at Next Level, it’s like our DNA.”

De Gruyter said that due to current environmental issues, eating sustainability has increased in popularity.

Plant-based items have continued to explode on menus, with even some of the most meat-centric chains now offering plant-based options.

Burger King menus a plant-based version of its classic Whopper and, last year, the chain tested meatless nuggets. McDonalds, on the other hand, ended the test of its highly anticipated McPlant burger earlier this summer, with analysts suggesting that its sales didn’t meet expectations.

De Gruyter said Next Level Burger’s quality of ingredients and value set help differentiate it in the limited-service space.

“If somebody wants to get a more sustainable option out of Burger King, more power to them,” he said. “If they want to have the entire package: awesome food, awesome service, feel good about themselves, their impact on their own health, their impact on the environment, supporting a company that actually pays living wages, then they can come to Next Level. We just think there’s no comparison between the two.”