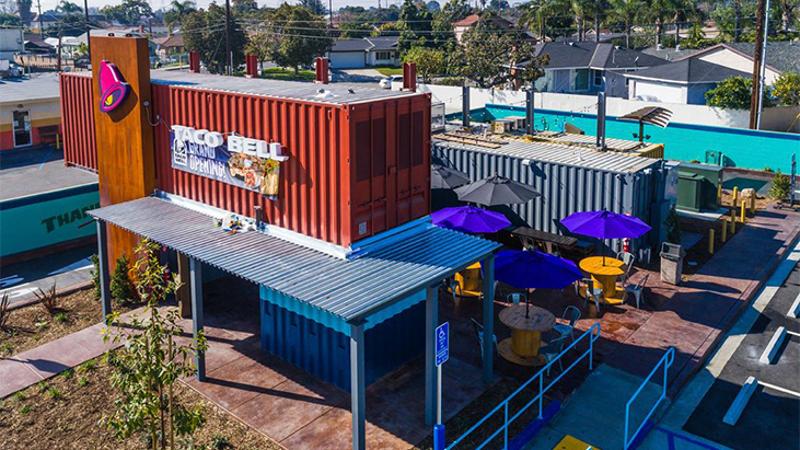 A handful of corrugated metal shipping containers from the Long Beach Shipyard have been resurrected as a first-of-its-kind Taco Bell on a street corner near Los Angeles. If successful, the concept could lead the way for future operations looking for quick construction and maximum profits from a small space.

The pint-size prototype (at 1,000 square feet, it’s about half the size of traditional Taco Bells) first appeared at Austin’s South by Southwest festival in 2015. At SXSW, the prefab taco shop went from “nothing on the ground to opening and operating for consumers” in three days, says Matt Prince, Taco Bell’s public relations manager.

The process of building the shipping container restaurant’s permanent home in largely industrial South Gate, seven miles southeast of Los Angeles, followed a less-accelerated timeline, given area zoning logistics and first-time glitches with this construction. But Prince is hopeful that future shipping container Taco Bells could pop up more quickly in other well-trafficked urban areas. The chain will wait to asses this unit’s success before planning future shipping container operations, he says.

It’s run by a longtime franchisee who was especially enthusiastic about the project, Prince says. “For the very first one, we wanted a good track record,” he says.

There’s no interior seating, but there is a drive-thru, a walk-up window and a few dozen outdoor seats. Chainwide, about 70% of sales come via the drive-thru, Prince says. Plus, Taco Bell’s very first restaurant, which opened in 1962 just a few miles from the South Gate prototype, only had a walk-up window. “It’s kind of fun to see things come full circle,” he says.