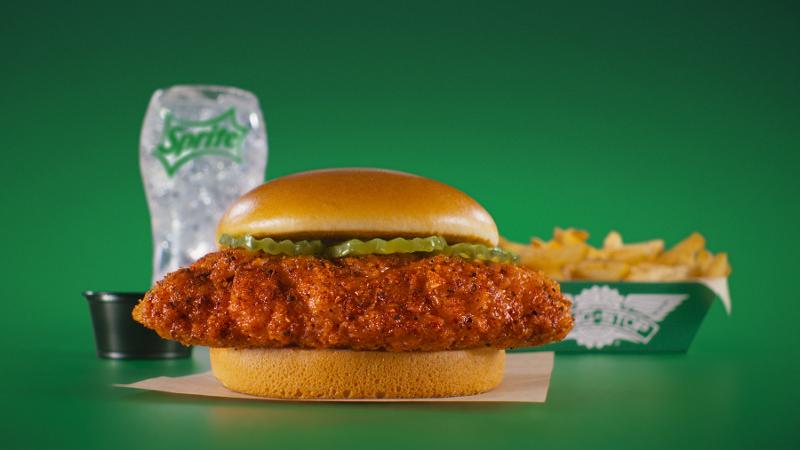 The new Wingstop combo meal is priced at $7.99. / Photo courtesy of Wingstop.

After seeing a rare decline in same-store sales earlier this year, Wingstop Inc. was back to growth in the third quarter, the company said Wednesday.

Domestic systemwide same-store sales were up 6.9% for the Sept. 24-ended quarter, which Wingstop president and CEO Michael Skipworth said was driven mostly by transaction growth—not the result of menu price increases, as has been seen across the industry.

It would be difficult to attribute that transaction growth to the new chicken sandwich line, launched in August, however, since the sandwiches were only technically available for six days during the quarter.

The chain sold out of four weeks supply in the first six days, putting the menu offering on hold for a bit while the company rebuilt supply and then relaunched the line again in October.

But Skipworth said the company saw the potential for the new menu line and guests “gave Wingstop permission to play” in the already crowded chicken sandwich space.

Available in 12 flavors and “sauced and tossed,” Wingstop’s sandwiches at $5.49 (with dipping sauce) are a “compelling value,” he noted.

The launch “demonstrated the opportunity that we have to drive brand awareness and the gap we have to other brands, which is still significant,” said Skipworth.

The chain leaned into the launch with its full advertising muscle, he added, “and what we saw was almost a halo effect to our overall business,” with all channels experiencing growth.

A few weeks into the second launch, Skipworth said the chicken sandwich mix is in the high single digits range, which is more than two times what was seen in the market test.

The sandwich line will also help further drive the sale of boneless items on the menu, and Skipworth said he can see a path to boneless wings, tenders and sandwiches becoming more than 50% of the total mix. That could help bring food costs down to the low 30% range, which will further benefit unit economics, he said.

Wingstop saw a nearly 43% decline in the cost of chicken wings, compared with a year ago, and the cost of breast meat is also coming down from highs earlier this year, he said.

Skipworth said the cost of jumbo bone-in wings on Wednesday, for example, was $1.05 per pound, which is a 1,000-basis-point improvement over a year ago.

As a result, Wingstop’s margins improved sequentially during the quarter. Excluding pre-opening expenses, the cost of sales decreased by more than 900 basis points, mainly driven by a nearly 1,100 basis point decrease in food and packaging costs. That deflation is expected to continue into 2023.

And, while other restaurant chains are reporting declines in digital sales as consumers return to dining in, Wingstop has found digital growth has remained sticky. And digital customers tend to spend $5 more per check on average.

The chain’s digital orders grew to 62% of sales, in part with the launch in July of delivery nationally with Uber Eats, in addition to the existing partnership with DoorDash.

“We believe we are in the early stages of building our delivery channel,” Skipworth said.

Wingstop also increased the contribution rate to the national advertising fund to 5% from 4%, starting in the second quarter, which during the third quarter resulted in premium ad placement during live sports broadcasts, like NFL games.

Skipworth said that national advertising will continue through the end of the year and into 2023 as the company strives to close the brand awareness gap between Wingstop and other chicken competitors.

“These are not just current quarter drivers for our business, but strategies that we believe have staying power,” said Skipworth.

The Dallas-based chicken chain is on track to drive average unit volumes above $2 million, he noted. Units were averaging $1.6 million in the third quarter.

Gunning to reach 7,000 locations worldwide, Wingstop added 40 net new units during the quarter for a total of 167 new restaurants so far this year, which is a growth rate over 13%.

Wingstop ended the quarter with 1,898 restaurants globally, including 1,673 in the U.S., which are mostly franchised (42 are company-owned).