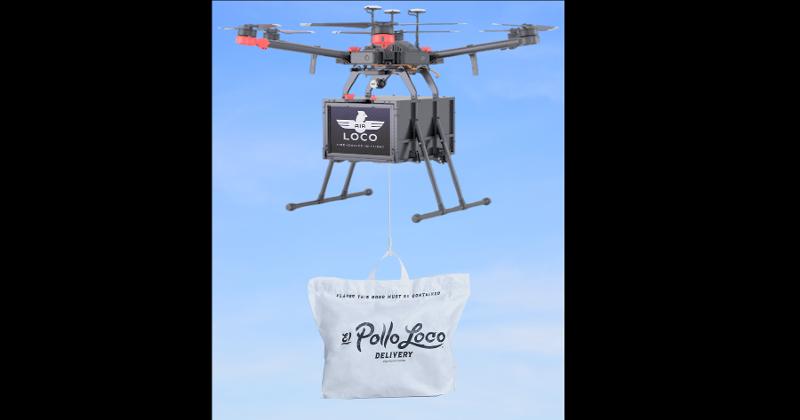 UPDATE: This story has been updated with additional details about El Pollo Loco's drone test.

A few lucky Californians might get to witness such poultry-based aerial phenomena this summer when El Pollo Loco tests delivery via drone.

Starting June 24, the chicken chain will use automated drones from Tel Aviv-based startup Flytrex to fly some meals to customers' homes. The drones can travel up to 32 mph and hover 80 feet in the air while lowering a packaged meal attached to a wire. They're also outfitted with a delivery box to keep the food intact.

The Costa Mesa, Calif.-based QSR said it is the first chain in the U.S. to test "door-to-backyard drone delivery."

"We want to offer drone food deliveries that are fast, convenient and safe," said El Pollo Loco Vice President of Digital Andy Rebhun in a statement. "The insights gleaned during this test-and-learn pilot will play a crucial role in helping us shape this exciting new service ahead of its rollout."

The chain is currently looking at launching the pilot out of up to 10 restaurants in Southern California, a representative said in an email. It hopes to expand drone delivery to more locations "based on test results, market demand and FAA regulations."

The chain believes the drones could reduce the cost of delivery by up to 30%.

A select number of El Pollo Loco rewards members will be the first to experience the new delivery format. The chain is also offering free regular delivery on orders of $20 or more to promote its new Thermo-To-Go packaging, for a limited time.

Delivery by drone is still very much in the testing phase but has made some progress recently. Walmart partnered with Flytrex last year in Fayetteville, N.C., and on Thursday said it had invested in Virginia-based DroneUp to expand its drone services. Elsewhere, Alabama-based Deuce Drone recently began delivering meals from a shopping center in Mobile, Ala., to a nearby office building.

Flytrex said its deliveries are faster, safer and cheaper than traditional delivery, which can be expensive for both the restaurant and the consumer. Land-based robot delivery has been gaining traction recently for some of the same reasons, with Chick-fil-A and Domino's among the chains giving it a try.