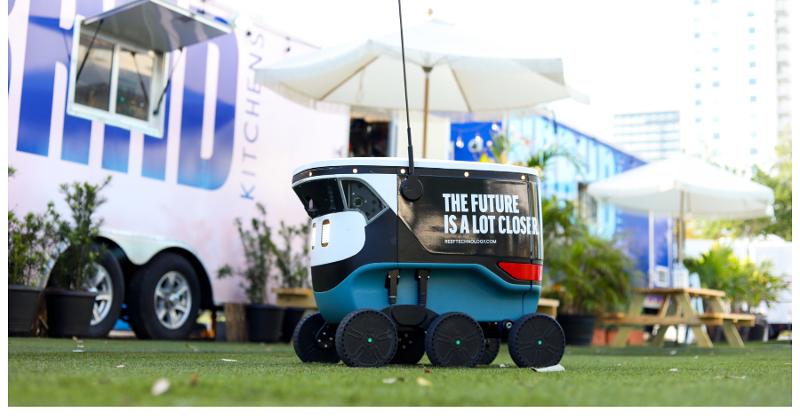 But first ... You can get this roundup and other restaurant tech news sent directly to your inbox every Wednesday. Click here to sign up for the Tech Check newsletter.

Delivery robots gain traction. Pedestrians on both coasts might be sharing the sidewalk with more robots soon as the autonomous couriers make inroads.

Reef hopes the bots will help ease bottlenecks amid heavy demand for delivery.

Meanwhile, food delivery aggregator MealMe is testing semi-autonomous Kiwibots to fulfill orders in Los Angeles. So far, two restaurants had signed up to use Kiwibots, according to Dot.LA. The robotics company also has partnerships with Ordermark and Shopify in San Jose.

Autonomous delivery offers a lot of intriguing benefits. It could help bring down delivery costs as well as reduce emissions and traffic congestion.

And both restaurants and delivery companies have been signaling that there’s a real future for the technology. Chipotle last month invested in self-driving delivery company Nuro, while Uber invested in Serve Robotics after spinning it off from Postmates. Serve bots are currently being tested in LA.

Speaking of robots …Piestro’s pizza-making bot is now allowing customers to pay with their face.

The company has partnered with PopID, a facial recognition payment company, to allow PopID users to scan their face to pay for pizzas either at the Piestro machine or within its app.

The partnership promises a completely contactless experience in which a person could order a pizza without interacting with anyone or touching anything.

“We want our customers to experience our deliciously crafted pizzas as quickly as possible, without sacrificing the quality of the product or their health and safety,” said Piestro CEO Massimo De Marco in a statement.

Brooklyn Dumpling Shop comes to New Jersey. The automat-style dumpling concept has a franchise deal for eight locations in the Garden State, with the first set to open this summer in Hoboken.

It’s the first step in the brand’s ambitious plans to add 1,000 North American locations through a partnership with Fransmart. CEO Stratis Morfogen said New Jersey could eventually have 16-20 stores.

Woflow raises $3.5 million. The San Francisco-based company helps services like DoorDash and Chowly maintain restaurant data on their platforms. Its technology automates things like bringing on a restaurant’s menu and keeping it up to date.

With the huge influx in online ordering, Woflow has seen a lot of demand for this service, which is something companies might otherwise do manually.

"Once we understood the size of this pain point for merchants, investing in Woflow was an easy decision," said David Sacks, general partner at Craft Ventures, who led the round along with Base10 Partners and Flex Capital.

Woflow said it will use the funds to expand its platform.

DoorDash offers perks for some Mastercard users. World and World Elite Mastercard holders will get free access to the delivery company’s DashPass subscription service for three months if they’re not already members. New and existing DashPass customers will also get $5 off their first two orders each month through September 2022.

DoorDash is bullish on the subscription service, reporting that members show higher levels of engagement and retention than regular users. DashPass members pay $9.99 a month for free delivery on orders over a certain amount.

The perk for users of the premium credit cards could help DoorDash grab some higher-spending members.

Brink POS integrates with Deliverect. Users of the cloud-based POS system from ParTech will now have access to Deliverect’s technology, which integrates orders from online and third-party sources into the POS. The goal is to reduce errors and streamline operations for restaurants that are increasingly fielding orders from multiple channels.

There’s a new front in the fight over menu labeling: Delivery apps.

DoorDash accused Olo of charging it too much.

A virtual brand transformed a brunch spot into a bagel concept.