Sassy servers and live bands play up the party atmosphere at Dick’s Last Resort destination restaurants. Last year, the brand decided to plunge into a new video and social media-fueled program to enhance engagement with the guests within the four walls and at restaurants throughout the chain. 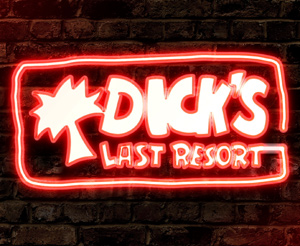 “We target locations with lots of foot traffic and 76% of our guests are from out-of-town," says Ralph McCracken, president and COO for Dick’s Last Resort.. "We’re event-driven, not a weekly visit, and most groups are six to eight people. They’re coming in for a memorable experience, and we want to give them one.”

With “joints” (as Dick's calls its restaurants) in 11 locations and growing, the party-time destinations cater to families as well as adult groups. Servers write irreverent labels on paper hats for guests to wear, while serving dinner and drinks with a side of wit and sarcasm. “It’s fun to go in, be a fly on the wall, and watch everything going on,” says McCracken. “It’s all in good fun. We’ve taken it to the next level with PlayNetwork to let people have more even fun and be entertained at the same time. ”

A year ago, Dick’s sought out a new way to engage customers. Custom audio/visual systems installed in each location enable guests to take photos of their group with their cellphone and send them directly to the screens. The photos are then displayed at every location – not just the joint where they’re sitting. They can also send text messages and Tweets to the displays.

“How many restaurants can you text something in, and know it’s seen all over the country? Or send in photos and people can see you there having a good time,” asks McCracken. “We also do a lot of military and children’s hospital support events. We’ll take photos and send them to the screens.”

And what if things get a little to rowdy, if not downright lewd? The system's supplier, PlayNetwork, "filters it all for us behind-the-scenes,” explains McCracken “We reach such a broad clientele in terms of age, we have to be careful.”

While many of the joints' televisions are showing the latest sporting events or other entertainment, one screen is always tuned in to Dick’s TV. “It’s a great avenue to help us promote the brand,” says McCracken. “We can also do promotions on a specialty drink item for that night in a particular location.”

There are three types of custom content on the channel:

On the weekends, Dick’s Last Resort locations feature live bands, but they also have a custom curated radio station to fill the space between.

“Music is one of the most “We’re gonna do something with a ‘battle of the bands’, where we bring bands into the restaurants in different locations,” says McCracken. “Then take the finalists to a playoff in Nashville, and show it in all locations across the country. We’d get great entertainment for our guests, and a big reward for the winning band.”

Additional future plans include live filming in-store on St. Patrick’s Day, as well as looking into mobile app and website technology to bring more of that in-store experience outside. “We’ve done all this in less than 12 months,” says McCracken.

Bottom line, if it ain’t fun we’re not gonna do it.”