Of all the restaurant companies to get in on the virtual brand craze, Nathan's Famous has been one of the most adventurous.

After turning itself into a virtual brand and expanding to more than 100 locations, the hot dog chain created a separate virtual concept (Wings of New York) and dusted off a classic brand—Arthur Treacher's—as a delivery-only entity.

Now, it is iterating once again by using the Treacher's menu as a vehicle for items from a completely separate restaurant.

Nathan's said last week that Treacher's menu will feature two entrees from a tiny Louisiana chain called Off the Hook. The three-unit concept serves Cajun fare like gumbo and po'boys, and will now have a chance to grow its brand nationwide with an assist from Treacher's. The larger brand will serve Off the Hook's seafood gumbo and crawfish etoufee alongside its own fried fish, shrimp and chicken dishes.

The partnership hints at the almost endless possibilities of virtual brands, which have entered an experimental new phase recently. Some chains, for instance, have aired plans to open virtual concepts as physical locations, while others are serving food from their delivery-only concepts on the in-restaurant menu. Because virtual brands tend to be low-risk endeavors, they lend themselves well to trying new things, and Nathan's appears to be running with that. 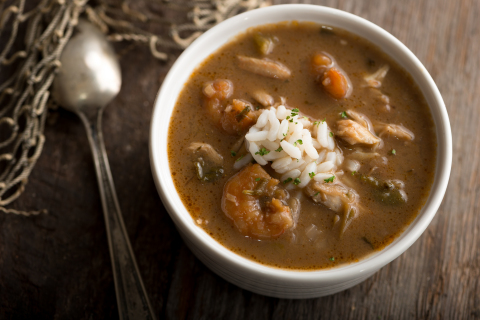 Off the Hook's seafood gumbo / Photograph courtesy of Nathan's Famous

Zenput raised $27 million in a Series C round. Restaurants use the company's software to automate processes around things like public health and food safety. It has seen revenue increase by 100% over the past year, the company said, and its technology is now being used by more than 60,000 restaurant locations including large chains like Chipotle and Domino's. The round was led by Golub Capital and brings the company's total funding to $47 million.

Slice hired a new CFO from Amazon. Jayant Mittal will assume the role as the fast-growing tech company approaches more than $1 billion in pizza sales. Mittal was Amazon's director of worldwide corporate development for the past four years and helped the company develop initiatives around robotics, autonomous driving and payments in Europe, Middle East and Africa. He was also a board member for European delivery company Deliveroo. Slice is a technology platform for independent pizzerias.

Picnic raised another $4.2 million. The pizza-robot maker added the fresh funding to a $16.3 million Series A round announced in May, bringing the total to $20.5 million. CEO Clayton Wood said in a LinkedIn post that the company will use the investment to expand its team and its commercial operations amid a "surge" of interest for its automated pizza-topping system.

Squadle unveiled a food safety platform for pizzerias. The workflow automation company launched Squadle for Pizza, with software and hardware built specifically for pizza restaurants. They can use the platform to help manage workflow, employee check-in, equipment maintenance, food temperature and more, with the goal of streamlining operations.

Gopuff is launching its own ghost kitchens as it closes in on another $1 billion fundraise.

Why tech can help restaurants weather the Delta variant.