“If you dig through the numbers, it certainly was full service dragging this down,” says Joe Pawlak, managing principal with Technomic. “And if you look even closer, it was casual dining that was dragging it down.”

The problems were most acute among some of the sector’s biggest names: Applebee’s sales declined 7.5%. Based on the chains’ respective growth rates, it is likely that Olive Garden this year will surpass Applebee’s as the country’s largest casual diner.

“Casual dining is still in a slump,” Pawlak says. “We still think small chains and independents are performing at a better rate. Consumers want a unique experience when they go sit down at a restaurant.” 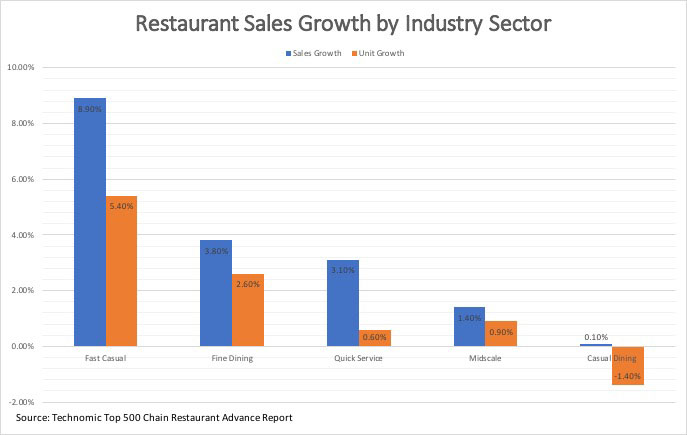 Technomic’s Top 500 measures chain restaurants based on systemwide sales. Information for the list comes from numerous sources, including publicly available data, companies’ self reports and Technomic’s own data. The advance report includes numerous estimates, many of which are based on Technomic’s Transaction Insights data.

McDonald’s, as it does every year, sits alone at the top, with $37.5 billion in systemwide sales last year. But its unit count has been falling in recent years, including a 0.5% decline last year to 14,080, according to Technomic.

It is still dominant—larger than the combined sales of Starbucks, the second largest chain, and Subway, the third largest, along with No. 10 Pizza Hut.

Both are considerably smaller than Subway based on unit count. But the Milford, Conn.-based sandwich giant is also shrinking: Its unit count declined by 3.1% last year to 25,908. System sales were 10.8 billion, down 4.4% from the year before, according to Technomic data.

But leading all sectors last year was the fast-casual sector, where sales grew 8.9% and unit count increased by 5.4%.

That was something of a surprise, given challenges in fast-casual same-store sales last year. But the growth was only moderately slower than the year before. “We expected a little bit more of a decline,” Pawlak says.

He believes some of that could be credited to Chipotle, which saw total system sales grow by 14.6% in 2017.

In fact, the burrito chain’s system sales are now where they were in 2015, when a series of food safety incidents hammered same-store sales—which fell 20.4% in 2016.

“We expected Chipotle a little lower,” Pawlak says, noting that it “overperformed” compared with other fast-casual chains.