McDonald’s this week revealed plans for a springtime expansion of its fresh beef quarter-pound burgers that are made to order.

The move is something of a risk, in that it could hurt the chain’s service speed, especially in its important drive-thru, while potentially making the food less safe. But it’s a risk the chain probably needs to take, given the loss of market share in recent years.

To understand that, we have to go back to 2012, before it began losing that share.

At the time, McDonald’s was a remarkably dominant restaurant chain. The company was bigger than the combined system sales of every other burger concept in Technomic's Top 500 Chain Restaurant Report, with $35.6 billion in system sales, compared to $35.4 billion.

McDonald’s weakness in the years since, and other burger chains’ strength in that time, has opened a gap between the two.

Last year, the other Top 500 burger chains were 13% larger than McDonald’s, even after a year in which the Golden Arches grew at a more rapid rate. McDonald’s would need another $5 billion in system sales to get back to its 2012 market share. 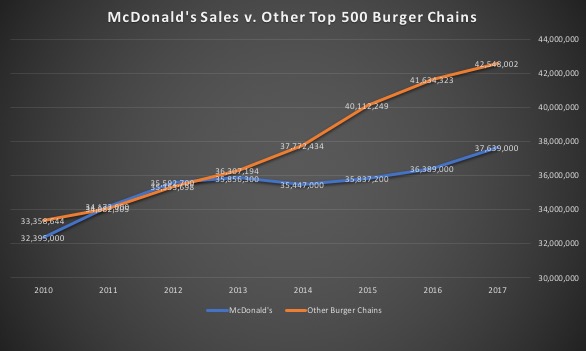 The lost market share has forced McDonald’s to rethink its strategy. For years, the company focused on convenience, seeking to attract as broad a customer base as possible. It built a lot of restaurants. It emphasized speed and built massive drive-thrus that now serve two-thirds of its customers. It sold cheap food, and efforts to offer higher-end items typically failed.

That convenience enabled McDonald’s to survive despite persistently weak ratings among consumers. Survey after survey has listed the chain at or near the bottom among not only its burger rivals, but among all restaurants, period.

The problem now is that the market is just that much more competitive. Chains such as Five Guys, Smashburger, Habit Burger and Shake Shack have all emerged since the recession.

Burger King and Wendy’s, meanwhile, have gotten their acts together.

The U.S. restaurant market is now saturated. Same-store sales have been weak for much of the past two years, and industry traffic has been weakening since the start of 2015.

As a result, consumers are choosy, and less willing to tolerate lower quality. If you don’t like McDonald’s Quarter Pounder, there’s likely another, better choice not that far away.

That burger competition has clearly hurt the chain’s sales in recent years. During McDonald’s weak period from 2013 through 2016, its average system sales increase was 0.6%, and included a rare, 1.1% decline in system sales in 2014—something that had not happened at that chain in the modern era.

Given that McDonald’s breakfast was a strength throughout that period, at least maintaining its same-store sales, the implication was that its biggest weakness came during lunch and dinner. In other words, the company was losing burger customers at a rapid clip.

While McDonald’s has a wide variety of menu items, and is clearly targeting chicken for future growth, it is still, at its heart, a burger destination. And that means the chain had to find a way to improve its base product—something executives acknowledged this week.

“We are a classic burger destination,” Linda VanGosen, vice president, menu innovation, with McDonald’s, said this week. “We needed to deliver a better burger experience to them.”

Whether this works remains to be seen. Making burgers to order could be a challenge during rush hours when there are long lines of customers. And, while the chain has strategies in place to ensure food safety, one mistake in the modern era can be devastating to a chain’s sales.

But the company is clearly enthused about the results of fresh beef in test markets. And customers have responded every other time McDonald’s improved the quality of a food item, including Chicken McNuggets and Egg McMuffins.

There are too many choices in the current market for a restaurant chain, even one the size of McDonald’s, to stand pat.