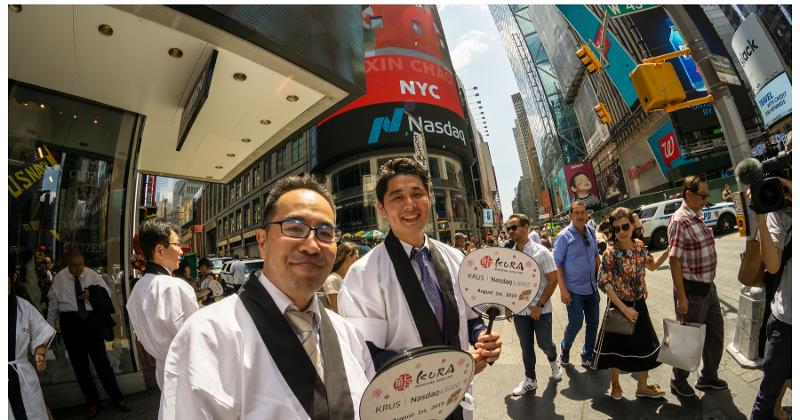 After suffering an 85.4% decline in same-store sales during the bleakest stretch of the pandemic, Kura Sushi assured Wall Street Tuesday that it’s snapped the downturn and can resume the introduction of its experiential concept to the U.S. market.

Toward that end, the Japan-based brand announced that it has appointed Sean Allameh, a veteran of Arby’s and Umami Burger, as its COO. Alameh was most recently the CEO of Luna Grill, a fast-casual brand.

He joins a chain that says its business is growing again. Sales for Kura Sushi’s 32 American branches have been running above 2019 levels since California allowed restaurant dining rooms to reopen fully on June 15, or 15 days into Kura Sushi USA's fourth quarter, executives told financial analysts.

Restaurants that were fully open for most of the third quarter ended May 31 generated a comparable-store gain of 5% from the pre-pandemic levels of two years ago, the officials said.

The key was getting Kura’s U.S. branches back in full operation, according to the executives. Currently, all 38 can use 100% of their indoor seats.  The chain was limited to about 60% of its systemwide seating capacities during Q3, said CEO Jimmy Uba.

He indicated that the rebound in on-site sales has not eroded Kura’s off-premise business. Takeout and delivery now generate about 10% of sales, compared with around 1% pre-pandemic, Uba said.

The brand has also returned to profitability, according to the results it released Tuesday for Q3. Net income was $800,000, compared with a loss of $9.2 million for the comparable quarter of 2020.

However, adjustments for one-time events left the company with a loss for the most recent quarter of $4.5 million, compared with a  year-ago adjusted loss of $10.7 million.

Kura Sushi locations feature a looped conveyor belt that runs past customers’ tables. Sushi chefs put small covered plates of Japanese fare on the conveyor, and patrons  snatch the items they want as the selections pass

Like eatertainment concepts, which market an immersion in their brands as much as they do their food, Kura was walloped particularly hard by the pandemic. For the second quarter of fiscal 2020, only the Dave & Buster’s food-and-games brand posted a steeper decline in same-store sales.

Now the chain is focusing on development, Uba said. He revealed that Kura Sushi has already hit its target of opening seven restaurants in five new markets for the chain during fiscal 2021, and has entered into eight lease agreements.

“We are benefiting from new real estate opportunities created by the pandemic,” Uba said.

Kura Sushi has more than 400 units in Japan, where it’s been in business since 1977.