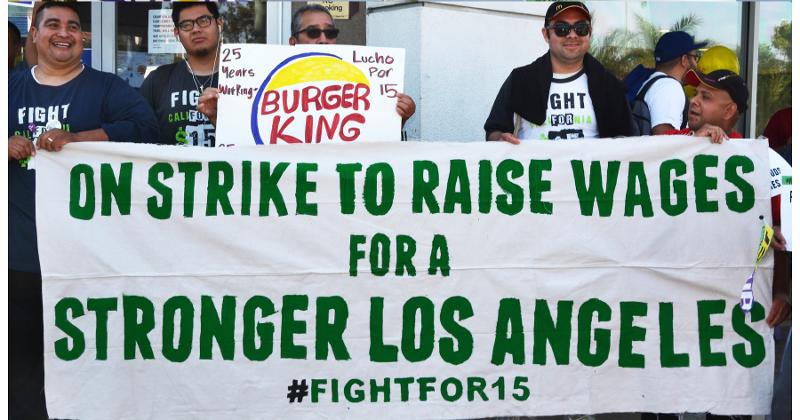 A new way of setting fast-food wages in California was instituted Monday when Gov. Gavin Newsom put his signature on AB 247, popularly known as the Fast Act.

The legislation shifts the responsibility of setting the minimum wage for quick-service workers from the state or federal legislature to a council that includes fast-food workers and union representatives—by design, giving them a significant role in setting their pay.

Employers will also have four seats on the council, equaling the number of places labor representatives will hold. All of the panel members will be appointed by state officials rather than elected.

Under the setup, the council can raise the pay floor for quick-service workers to as much as $22 an hour in 2023. They can then raise the minimum annually by however much the federal Consumer Price Index increases, up to a rise of 3.5%.

The council will also have the power to set workplace standards that fast-food employers will need to meet. That function is intended to give workers a loud voice in speaking out for their own safety and comfort.

The regulations will apply only to the fast-food sector of the industry, and only to California fast-food restaurants that are part of chains with at least 100 units nationwide. Restaurant Business estimates that fewer than 150 companies, and about 19,000 total locations, would be affected by the action.

Places that sell bread by the loaf are also exempted.

Although AB 257 is a California law, the National Restaurant Association says it expects similar legislation to be introduced in New York, Illinois, Oregon and Washington.

The trade group says it also anticipates that labor advocates will push to establish the same council format in California for setting the wages and working conditions of full-service chain units all independent restaurants.  But even without that step, a negative impact will likely be felt by other sorts of dining establishments, according to the association.

"The expected higher wage mandates alone could raise costs for California quick-service restaurants by $3 billion and that cost will likely spread to struggling independent restaurants as well," Sean Kennedy, the NRA's EVP of public affairs, said in a statement. "At a time when California restaurants are struggling with skyrocketing inflation in food prices and operating costs, this bill will push many owners closer than ever to shutting their doors in their communities."

Newsom’s decision to sign AB 257 was hailed by Fight for $15 and a Union, an affiliate of the Service Employees International Union (SEIU), as “an historic victory in fast-food workers’ decade-long fight for fair pay and a voice on the job.”

SEIU was a key architect and supporter of AB 257.

“By signing this bill, Gov. Newsom is siding with special interests rather than the people and small businesses of California,” International Franchise Association CEO Matthew Haller said in a statement. “This bill has been built on a lie, and now small business owners, their employees, and their customers will have to pay the price. This bill is a fork in the eye to franchise owners and customers at a time when it hurts most."

Groups such as the IFA and the California Restaurant Association have been lobbying against the measure. But the state Assembly passed a slightly different version in January, and the state Senate approved the measure in late August.

McDonald's took the extraordinary step last week of issuing a warning about the effects of the law via a public letter.

The IFA had tried to thwart AB 257 by saying it would raise food prices by 20%.

Update: Reactions from industry trade groups were added to the story.