When it comes to the massive unemployment crisis facing the restaurant industry, numbers tell only part of the story.

Jobless claims and unemployment figures are staggering, and they’re mounting day by day as the full scope of COVID-19 shutdowns and overall traffic declines comes into full focus.

And it all happened so quickly. Before the virus made landfall in the U.S. in late February, one of the biggest headaches for restaurant operators was recruiting and retaining workers.

Now, there’s no place to work.

Restaurant Business editors spoke this week with some of the frontline workers affected by large-scale layoffs and furloughs. Here are their stories.

Anne Marie Shanahan, who lives outside Seattle, has worked in the restaurant industry off and on for nearly four decades.

In fact, she was working as a server at Nikki’s Restaurant and Lounge in Covington, Wash., on March 15 when a customer showed her the news on her phone that the state’s governor had just shut down in-restaurant dining to slow the spread of the coronavirus.

She tried to apply for unemployment assistance the following day, spending two hours filling out applications on her phone. Her initial application was denied due to some errors.

“I’ve never gotten unemployment before,” Shanahan said. “It’s this whole process, and of course the unemployment claims place was not prepared for this. This is an emergency.”

She finally got approved on Wednesday, and she expects to receive her first check in the next couple of days. She expects it to be a “pittance” compared to what she was making at Nikki’s.

She has gotten a little help from a food bank and lives on a friend’s farm, where she’s now spending much of her time tending to the horses.

“What I’m trying to figure out now is how to just cover the cost of the hay for my horses,” she said. “I’m trying to get in touch with the credit card to defer my payment, but the line is constantly busy.” 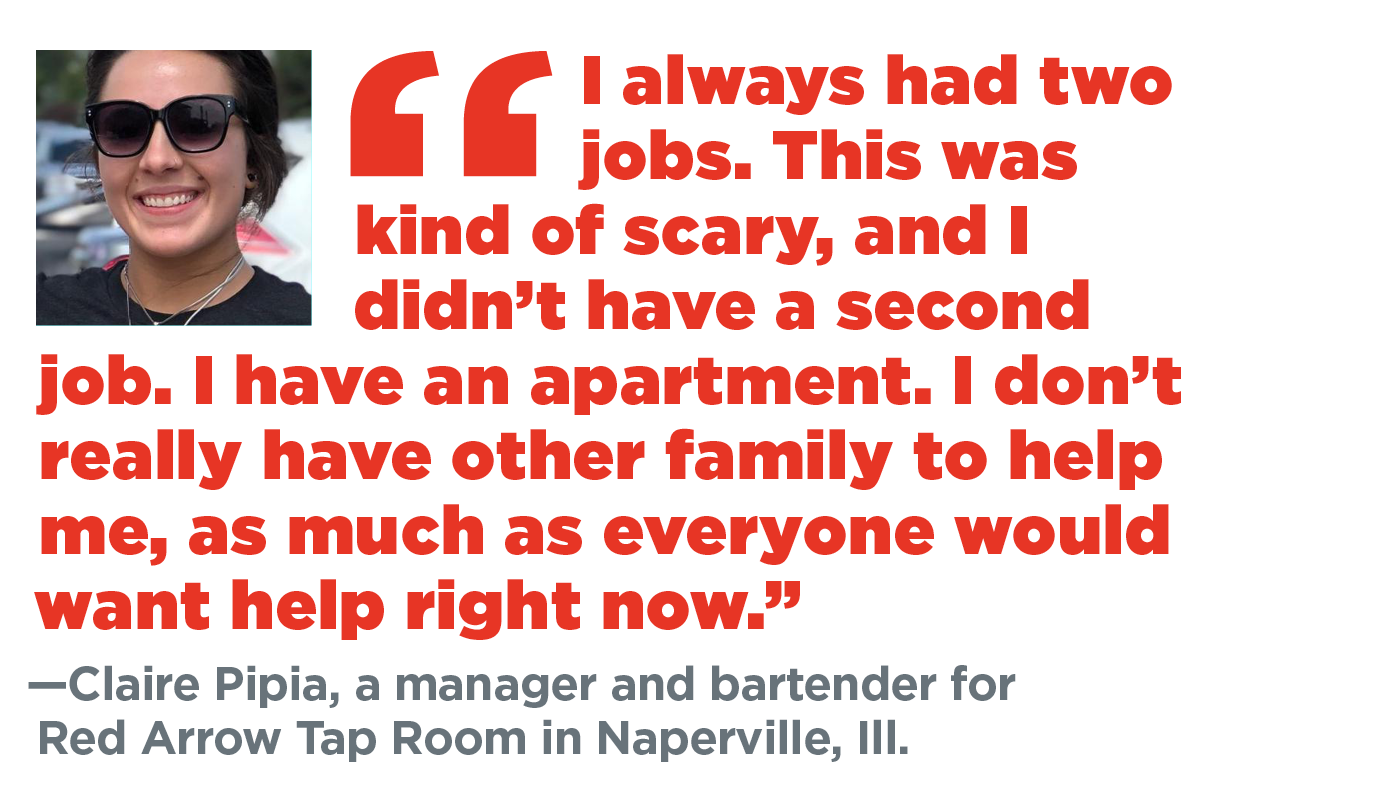 Claire Pipia has always worked in a restaurant in some form. And until recently, she’d worked at two restaurants at once.

“I’ve been working 40 hours a week since eighth grade,” Pipia said. “I did concession stands with family members. That got me into the food business.”

She worked at a steakhouse and at Chipotle Mexican Grill. A year ago, she took a job with Red Arrow Tap Room in Naperville, Ill. It was the first time in her life she had worked for just one employer. Red Arrow is a self-serve craft beer concept, and Pipia was a manager and bartender.

Pipia is an extrovert, and as a bartender, she got to know the location’s customers and its regulars. “I like bartending,” she said. “It’s a little more interactive with the customers. I like having a customer base with the regulars a lot. You get your Sunday people. And when the patio’s open, there are those couples that come out there.”

Three weeks ago, however, the state of Illinois closed restaurants to dine-in service. The three-unit Red Arrow furloughed 63 employees. Pipia was one of them.

“This was kind of scary,” she said. “I didn’t have a second job. I have an apartment. I don’t really have other family to help me, as much as everyone would want help right now.”

Pipia has filed for unemployment. She is also hopeful that the company will be able to get a federal stimulus loan that will enable it to bring workers back. In the meantime, she is a student at Northern Illinois University and is concentrating on her schoolwork and walking her dog three times a day.

She also worries about the virus. “I have terrible allergies and asthma,” Pipia said. “It will be bad if I get hit with it. So I stay inside, focus on school, wait for unemployment.”

Like many, Kevin Armantrout has worked in the industry for years. The 53-year-old started when he was 13. He’d worked his way up with chains such as The Cheesecake Factory and Ruth’s Chris Steak House.

Armantrout was CEO of Lucy’s Retired Surfers Bar & Restaurant, a two-unit concept based in New Orleans. He was tasked with growing the concept. As he and the concept’s owner watched the coronavirus spread, Armantrout hoped that it would recede.

“We had no idea what was sitting in front of us,” he said.

It didn’t recede. And then New Orleans became a hot spot. Three days after he expressed hope that the virus would slow, the company decided to shut everything down. All 300 workers were let go, including Armantrout.

“I wasn’t special,” Armantrout said. “I’m just like everybody else. When there’s no income, everybody is in the same boat.”

Armantrout understands the decision to close. “[The owner] has to take care of his family,” he said. “That’s the business world. That’s the reality of the world.”

Still, Armantrout worries about tipped employees who might not get all of their income back from unemployment, and dishwashers who lost their income. “They have to figure out what to do, and how to feed their family,” he said.

In the meantime, Armantrout is plotting his next role. He and a couple of friends in the restaurant business have decided to offer a service for restaurant companies that will need to get back on track once all this is over.

“Some companies are not going to come back,” he said. “This is decimating so many people and so many people’s lives. But we know there’s going to be a need for people that can’t afford high-level management. We can help coach and develop and get people on their feet when all this is over.” 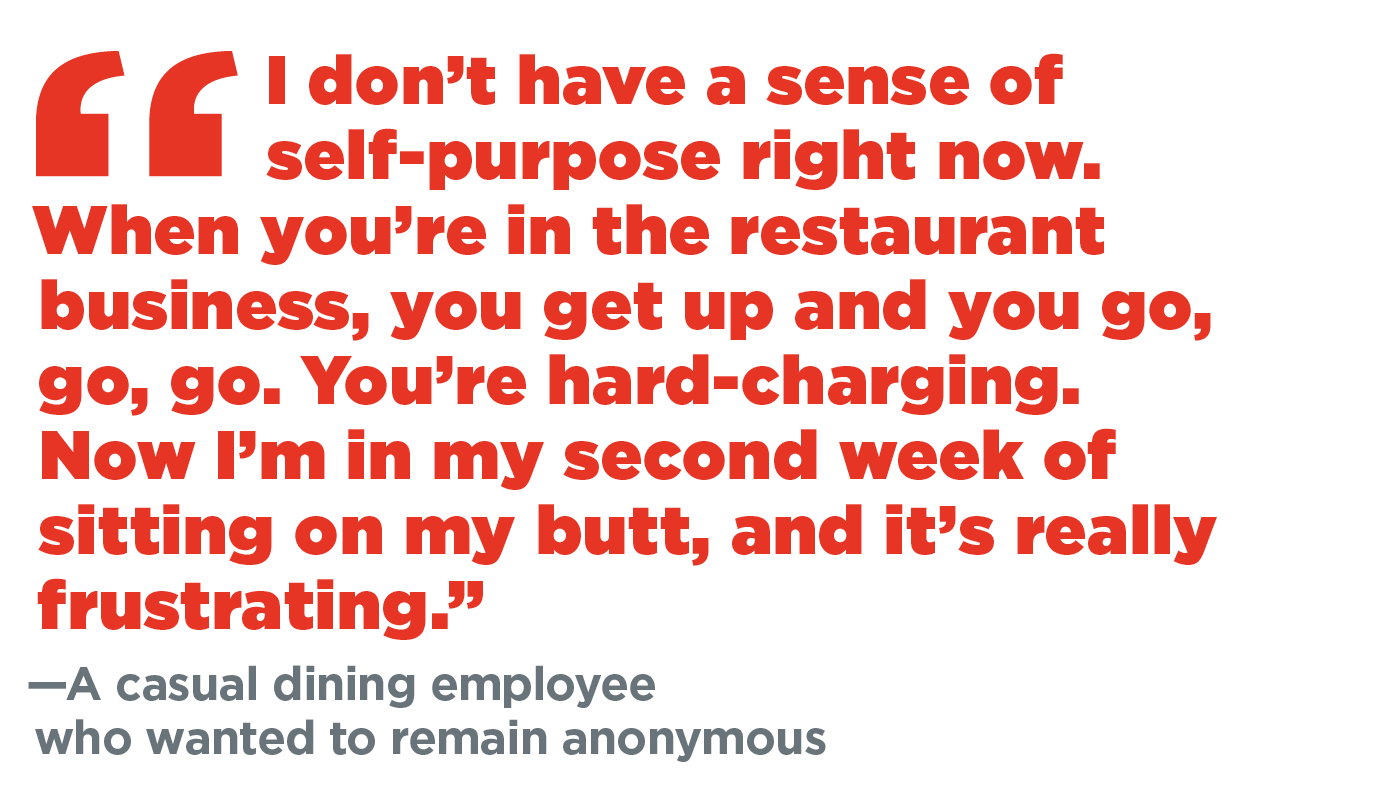 Vinnie (not his real name) was managing a unit of a casual-dining chain when reports started emerging from China of this rising global health threat. He didn’t give them much thought until he chatted with a personal acquaintance who happened to work for the Department of Homeland Security, who stressed how big of a threat the coronavirus really was.

“It turned out that everything he said was true,” recalled Vinnie, a 30-year veteran of the restaurant business. “I started talking about it with my boss during our regional meetings. Our concern was, what happens if this gets real? And it slowly did.”

In the meantime, “It was business as usual. I don’t think the restaurant industry saw the severity of what was happening. I don’t think even the public knew what would happen.”

The reality hit home when markets served by Vinnie’s chain started to suspend dine-in service. “We started thinking that our game was up. If the ship’s going down, we’re going to go down with it.”

Still, “No one knew what was happening. We then asked if there was going to be a temporary shutdown—no one knew.”

In the middle of March, as the situation was well into crisis mode, all restaurants and staff members received an email from their chain’s CEO, assuring them “We’re going to get through this,” Vinnie recalled.

But business was dropping, and more areas were shutting dining rooms. Vinnie and his assistant manager looked for ways of holding onto sales.

“We focused on local store marketing. We wanted to make sure that if indeed this thing crashed, we’d know that we’d done everything,” he said.

Headquarters convened two meetings a day for executives, and a regional supervisor would similarly touch base with individual operators on the same schedule.

“Every meeting was more drastic. They were waiting to see what the hell was going to happen.”

At first, the thinking was that dining rooms would be closed and managers would take over the cooking and handing over of meals to takeout customers and delivery personnel. Then Vinnie was alerted to furlough virtually his whole staff, keeping just eight employees per shift—two back of house, two front of house to run orders—for takeout and delivery.

“I pulled my managers in and told them what we were going to do.

“We had 55 people come in and we went over it with each of them in a day. ‘What does this furlough look like?’

“We talked to people about collecting unemployment.” Vinnie and his assistants sat with employees to walk them through the online process.

They also helped the staff navigate the process for requesting an emergency relief payment from the brand’s self-funded employee support program. “I made everyone apply. Everyone but two people did get money.”

But the other shoe dropped. Corporate sent word that the restaurant was closing altogether.

In the days since, he’s kept in touch with many members of his staff. They usually ask whether their former employer is doing something for them or are they to “fend for themselves.”

“We’re just trying to get money. My company went back on everything they talked about. Everything that they told us about, they didn’t do for the managers.

“I’m getting out of the restaurant business. I can’t take it anymore, my  company not taking care of its employees. The restaurant industry is decades behind in how they treat their staffs.

William Mills, 37, has worked in the restaurant industry for nearly 20 years.

In the early days of the coronavirus crisis, he watched as traffic dwindled at the jazz bar-restaurant where he was general manager. Mills talked often with the owner of The Joint at 1710 Main in Columbia, S.C., about whether they should stay open for takeout and delivery.

“We were going back and forth: ‘Do we continue to-go and do delivery and try and have a trickle of money coming in, or do we just go ahead and shut down now?’” Mills said. “I wanted to keep working because this is my only source of income. I was basically begging him to keep the restaurant open.”

But the restaurant, which is on the city’s main drag, was too badly hit by the closures of nearby federal courthouse and office buildings.

“Our built-in customer base just dwindled dramatically over night,” he said.

Filing for unemployment assistance has been a frustrating process.

“There’s so many people filing right now,” he said. “The website crashed. … My biggest thing is support mom and pops as much as you can. Already, a lot of restaurants have closed their doors for good, whether they know it or not.”