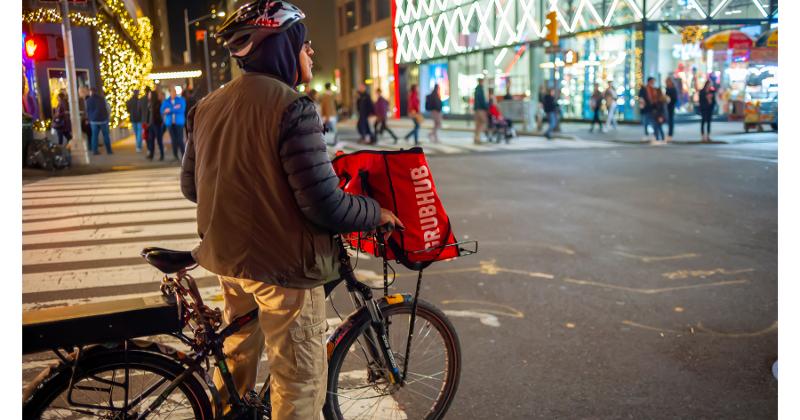 The New York City Council on Thursday approved a package of bills designed to strengthen protections for the city’s tens of thousands of food delivery workers.

The landmark legislation will give couriers more control over their routes and better access to restrooms, and gets the ball rolling on establishing minimum per-trip payments.

It is the latest step by the Big Apple to regulate third-party delivery companies, some of which are suing the city over its permanent cap on delivery fees and a requirement that they share customer data with restaurants.

The bills are in large part the result of efforts by activist organization Los Deliverstas Unidos, a group of mostly immigrant food delivery workers who have been calling for better wages, restroom access and other protections.

The providers, which have been in lockstep in their opposition to the city's recent policies, had somewhat different reactions to the latest legislation.

Grubhub said it fully supported the measures. “These bills are common-sense steps to support the delivery workers who work hard every day for New York’s restaurants and residents,” a company spokesperson said in an email. “Ensuring they receive a living wage and have access to restrooms isn’t just a good idea—it’s the right thing to do.”

Competitor DoorDash, meanwhile, highlighted some of the steps it has taken to support its delivery people, known as Dashers.

“Last year, we announced an industry-leading set of initiatives to improve Dasher safety, strengthen earnings, and expand access to restrooms,” a spokesperson said in an email. “We will continue to work with all stakeholders, including the City Council, to identify ways to support all delivery workers in New York City without unintended consequences.”

The company said Dashers in Manhattan earn an average of $33 for each hour they spend actively delivering food. A report from the Council’s Committee on Consumer Affairs, however, cited several examples of workers whose hourly earnings were much lower than that.

DoorDash also expressed concerns about two of the six bills. It said that giving couriers too much control over where they travel could lead to discrimination against certain areas. And it opposed the final version of the bill about bathroom access, which requires delivery companies to include a provision in their contracts with restaurants that they allow delivery workers to use their restrooms. An earlier version that was supported by DoorDash placed that responsibility directly on restaurants.

Uber Eats had not responded to a request for comment as of publication time.

In brief, the six bills will:

Council Member Carlos Menchaca, who was among the sponsors of all six bills, recalled during Thursday’s Council meeting how he was shocked to learn that delivery workers often had nowhere to go to the bathroom while on the job; the committee report found that workers routinely resorted to urinating in Gatorade bottles.

“There is some stuff happening with these apps that you need to look at,” he said delivery workers told him.

The New York City Hospitality Alliance (NYCHA), a group representing the city’s restaurants, voiced its support for the legislation Thursday.

The bills were approved by an overwhelming majority of the 51-member council. They await the signature of Mayor Bill de Blasio, who is expected to sign them.