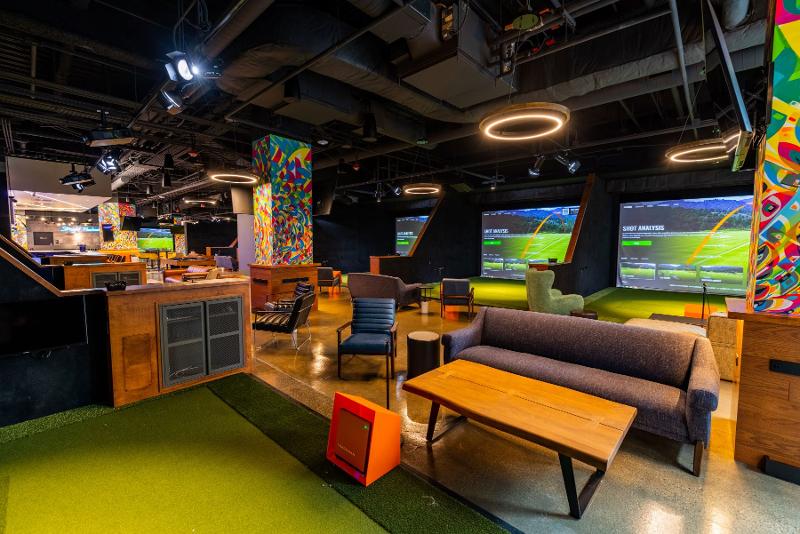 Food-and-games chain Five Iron Golf is a bit like a mini-sized version of Topgolf, with its smaller footprints geared toward urban locations and a menu of elevated gastropub fare.

The investment will be used to fuel the 11-unit eatertainment chain’s growth around the country, CEO and co-founder Jared Solomon said.

In announcing the investment, Callaway CEO Chip Brewer highlighted Five Iron’s alignment with his company’s “belief that the future of golf will be more accessible and inclusive.”

The first Five Iron opened in Manhattan in 2017. Its name comes from a mashup of Fifth Avenue, the city’s Flat Iron District and, of course, the middle-distance golf club.

He started taking lessons, but as a New York City resident, he had trouble finding places to practice. So, Five Iron was born.

Unlike Topgolf’s massive locations, typically located outside of big cities, Five Iron’s units are about 10,000- to 15,000-square-feet. Golf simulators allow visitors to practice putting or play a round on well-known courses.

“I really like street art and graffiti and the modern industrial look,” Solomon said. “I had zero experience running a kitchen, but that was a founding principle. The risk was we would alienate serious golfers who are members of country clubs. But the truth is, they love it. If we have good clubs and good tech, serious golfers will come.”

High-tech mini-golf concept Puttshack received a $60 million investment in May to fuel its U.S. growth, after debuting in the U.K. (Puttshack was created by the twin brothers who founded Topgolf.)

“The idea of golf as entertainment is really exciting,” Solomon said. “It’s something that’s cool. It’s really exciting introducing people to a sport that’s been exclusive.”

Five Iron tries to appeal to serious golfers and novices alike with its high-tech simulators and elevated food and drinks.

“You’re hitting real clubs with a real ball into a screen,” he said. “There’s a tracker behind you that projects onto the screen in front of you. You can play real golf courses and you can practice your game. It’s very much like real golf.”

The food menu is designed around shareable items such as flatbreads and wings, as well as sandwiches and salads. There’s a full bar for cocktails, wine and beer.

The chain is working on innovating and elevating the menu, with a focus on seasonal dishes and from-scratch cooking in the coming year, he said.

The pandemic brings continued uncertainty, he noted, but said it is not slowing down the brand’s growth.

“These things take a year to open,” Solomon said. “A year ago, we thought the pandemic would be over and it’s not … We want to build community. We do care about our customers’ safety and we care about our employees’ safety. We’re just trying to be diligent in following the regulations.”