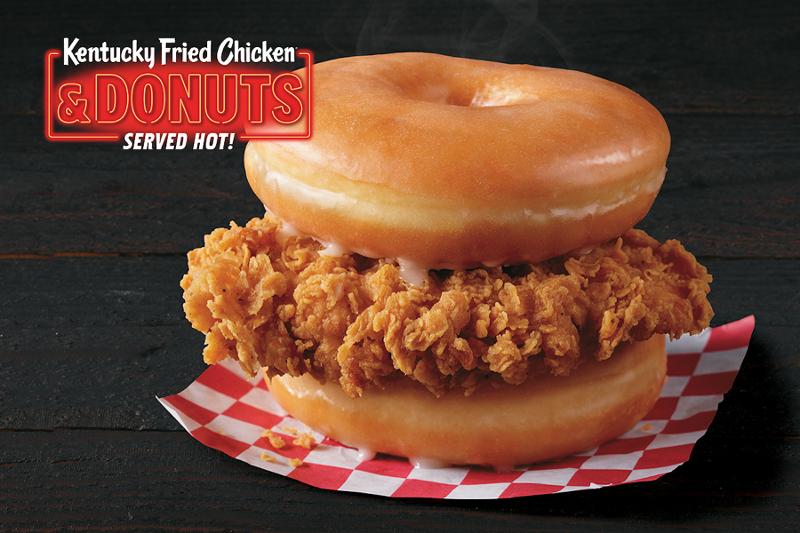 KFC said Tuesday that it is testing Hot and Fresh Chicken & Donuts in the Norfolk, Va., and Pittsburgh markets. The Louisville, Ky.-based chain could introduce the items nationwide if they prove popular.

The Louisville, Ky.-based concept is pairing chicken with a glazed doughnut, including a meal that features chicken on the bone or two tenders with one doughnut for $5.49 or a big basket with two doughnuts for $7.49. There is also the Kentucky Fried Chicken & Donuts Sandwich for $5.99. Or customers can add a doughnut to any meal for $1.

The test comes as chains continue to push the envelope on new menu items and find more ways to get consumer attention.

Chains’ new fall menus, in fact, have featured either a lot of pumpkin spice (and at an earlier date than ever) or something particularly edgy. On Tuesday alone, Chipotle introduced its first new protein in three years in carne asada steak, and KFC sister company Pizza Hut stuffed large Cheez-Its.

And last week, another Yum Brands-owned chain, Taco Bell, introduced a chalupa with cheese baked into the shell.

Or at least that’s the perception.

Restaurant sales are tougher to come by, thanks to concerns about oversupply and the addition of aggressive new competitors, which have kept industry traffic stagnant at best.

KFC, which is working on a five-year sales recovery, has been particularly aggressive at this, beginning with its now-infamous Double Down sandwich with chicken patties for bread in 2010 and continuing with its Cheetos Chicken Sandwich this past June.

It also tried more common items, such as its chicken and waffles late last year and Cinnabon Dessert Biscuits this past May. It’s currently giving away a chocolate cake when customers order a 10-piece meal.

“Consumers are increasingly seeking novel, craveable flavor combinations that give them the best of both sweet and savory worlds to create a unique taste experience,” the company said in a release.

The social media-fed curiosity factor was also evident in the intense interest in the chicken sandwich introduced by Popeyes Louisiana Kitchen late last month. KFC’s rival received all sorts of attention based on a single tweet—so much that it ran out of product.

Chains have also caught social media fire with their introductions of plant-based menu items, as seen by the popularity of Burger King’s introduction of the Impossible Whopper this summer. KFC had one of its own with the Beyond Fried Chicken test, a one-store test that proved so popular it ran out of product in five hours.

All that said, such efforts create a need for more of that type of marketing strategy in the future. Publicly traded chains rely on quarterly same-store sales, and so when a product generates sales one year, that restaurant will have to at least match that performance a year later.

In other words: They work, so companies keep doing them.