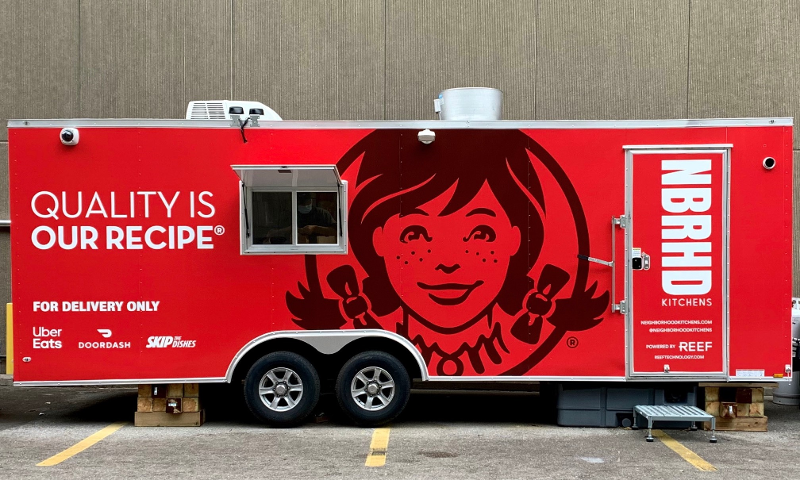 Wendy's is paring back its massive deal with Reef Kitchens after the locations underperformed in the U.S. / Photo courtesy of Wendy's.

The Dublin, Ohio-based Wendy’s now plans to open 100 to 150 locations globally, most of them outside the U.S. It had originally planned to open as many 700 locations, at the time the most ambitious ghost kitchen strategy among any of the country’s biggest restaurant chains.

Wendy’s also expects to close some of its 70 Reef locations this year. The company expects to finish the year with 65, even as it opens some locations in Canada and the U.K.

“In the U.S., we are not yet performing,” Wendy’s CFO Gunther Plosch told investors on Wednesday. He noted that average unit volumes for Reef locations in the U.S. are less than $500,000. That is much less than the $500,000 to $1 million at locations in other countries where the ghost kitchen deal is performing as expected.

When a Wendy’s opens in a Reef facility, it is the only location operated there. Citing the generally weak performance, Reef wanted to operate more than one brand within that location.

“We do not want multiple brands out of our kitchens, we want to dedicate it to Wendy's,” CEO Todd Penegor told analysts. “So, we'll be slow and steady and we still think there's a great urban opportunity to continue to provide access to our brand with some kind of concept in those markets.”

Reef in a statement said it believes operating more than one brand within one of its facilities is more productive. The company said that sales out of its kitchens double when it puts more than one of them into a facility.

“Wendy’s has been an early adopter of the Reef model and one of the most forward-thinking of our partners,” the company said in a statement. “We are excited to continue innovating together with a focus on doubling down internationally, where we’ve seen very strong unit economics in our current partnership.

“As Reef continues to focus on profitable growth, we are committed to increasing productivity and efficiency by delivering multiple brands from every kitchen in our ecosystem. When deploying our multi-brand model, we have already seen the average sales per kitchen double over the last year.”

Wendy’s pullback on its Reef deal is the latest in a series of setbacks for the ghost kitchen trend, at least in the U.S. Ghost kitchens, which operate typically operate restaurants for delivery and takeout, have become more popular among operators lately after the pandemic shifted demand more dramatically to takeout. The concepts have generated considerable investment dollars and several of them are growing rapidly around the world. But some of them have generated controversy.

Reef earlier this year made some changes in its operations after some health and permitting violations. Penegor also referenced the company’s struggles in opening some units in certain markets.

More broadly, many small restaurants have struggled after opening in ghost kitchens. Many of them are plagued with employment challenges and high turnover among operators.

At the same time, the trend continues to win backing from major investors, and some ghost kitchen companies continue to add locations and innovate with new ideas. Some restaurants that start in a ghost kitchen are now opening brick-and-mortar units.

Wendy’s initial deal was viewed as a watershed moment for the ghost kitchen movement. It was a massive deal by any measure. And it represented the biggest commitment to such concepts by a top 10 brand. Wendy’s is the fifth largest restaurant chain in the U.S. as measured by system sales.

With the pared-down deal, Wendy’s says it will “test and learn” with Reef locations in the U.S., though it plans to continue expanding in Reef units in other countries where the model is more successful. Wendy’s plans to concentrate its ghost kitchen units on densely populated markets.

“We are working with Reef to make this work,” Plosch said.

The deal represents a setback for Wendy’s, both its unit growth efforts and its bid to make more noise in urban markets.

Wendy’s viewed the deal as one that could give it access to such trade areas, where it is not currently strong. The company still believes there is potential there, with or without Reef. “I think that the opportunity is still large in urban areas,” Penegor said. “So, whether that’s cracking the code with Reef, finding another partner, thinking about other ways to traditionally grow in some of those markets, that will continue being our focus going forward.”