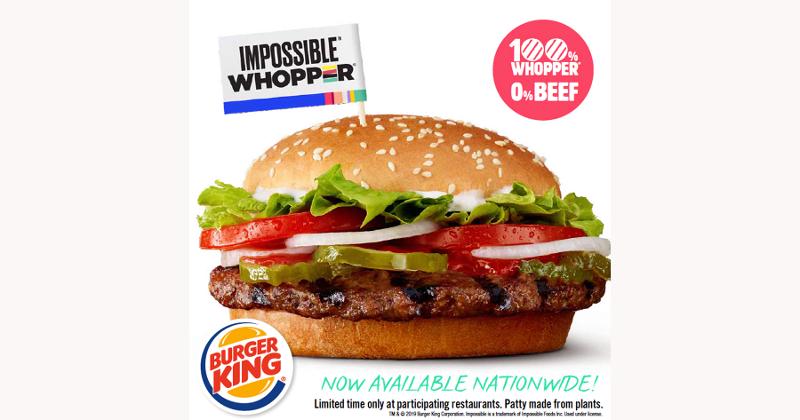 Burger King said Thursday that it plans to debut its Impossible Whopper nationwide next week.

In the process, it’s offering customers a deal to encourage them to try both the plant-based option and the regular option: Customers who order via delivery through DoorDash or the Burger King app can get both for $7 through Sept. 1.

The suggested price on the Impossible Whopper is $5.59. The product will make its official appearance on U.S. menus Aug. 8.

“Since we first launched our market tests in St. Louis in April, and later in six other markets across the country, we’ve heard great feedback,” Chris Finazzo, president of North America for Burger King, said in a statement. He said the Impossible Whopper appeals to both existing customers and new customers eager to try the plant-based option.

The announcement comes on the heels of Impossible Foods’ announcement of a deal with OSI Group, a big restaurant supplier, to manufacture its Impossible Burger product as demand intensifies.

Burger King will be, by far, the largest restaurant chain to offer a plant-based burger at all its locations—7,000 in all.

By comparison, White Castle, which offers an Impossible Slider, operates fewer than 400. Del Taco and Carl’s Jr., both of which feature products featuring Impossible rival Beyond Meat, have 600 and 1,100 restaurants, respectively.

Dunkin’, the Canton, Mass.-based doughnut and coffee chain, has 9,400 stores, and plans to add Beyond Meat-based breakfast sandwiches. Numerous other restaurant chains have added plant-based products to their menus.

Burger King currently has the product in seven test markets, and early results were strong enough to warrant a quick expansion.

The Impossible Whopper will be available for a limited time, the company said.