Increasingly, the pandemic has driven a wedge between us and our food. We’re now more likely to be ordering at home, on a screen, from a third-party marketplace—quite possibly from a restaurant that’s not a restaurant at all.

That order is sometimes traveling miles to get to us and arriving in a box or a bag, often left at our doorsteps without a trace of the person who brought it there, not to mention the person who prepared it.

Often, the food in the bag has been something indulgent and comforting. It’s likely something that travels well, or that has been deconstructed to travel better, in an effort to approximate, as closely as possible, the dine-in experience.

The process has become integral to restaurants’ survival during a public health crisis that has devastated the industry. But with the prospect of this kind of transaction becoming the new normal, it bears asking what it’s doing to our experience of food.

“It’s a totally different business model,” said Erick Williams, owner and executive chef of Virtue Restaurant & Bar in Chicago. “Many chefs that are cooking in the circuits that I align myself with are very focused on things that we would all understand as buzzwords right away: sustainability, commitment to the land, technique, process and, last but not least, the aesthetics of the dish.

Virtue, a Southern American fine-dining restaurant, had intentionally avoided delivery for that reason, but added it during the pandemic as a means of survival.

“We didn’t have to alter the food a ton,” he said of his menu, which features Southern staples like gumbo and catfish. Instead, Virtue focused on finding the right packaging for each dish—weighing plastic vs. biodegradable boxes, moisture retention and steam.

“So we worked through it that way,” he said. “And we try to take a lot of pride and put a lot of emphasis on making sure that if someone gives us the chance to feed them or share a meal, that they know we care about them.”

“At the end of the day, what you’re trying to do is create a very enjoyable meal for somebody at home.” —Michael Mina, Mina Group

Michael Mina, chef and founder of the Mina Group of more than a dozen concepts, has leaned more enthusiastically into delivery since the pandemic began, creating a handful of delivery-only brands tailored to off-premise, such as Tokyo Hot Chicken and Bourbon Burger Bar. The menu development for those concepts differs distinctly from those at his brick-and-mortar restaurants.

“When we’re doing a dish for the restaurant, there’s probably about 20 to 25 guardrails we’ll put around it,” he said—for example, an Italian place shouldn’t serve sushi. For the virtual concepts, there are three times that many. “You’ve just gotta think about the process very different,” he said.

That means everything from ingredients to packaging to the arrangement of the food itself. His team has obsessed over the best napkin to wrap a burger in and how to cook and package salmon with curried lentils so that they travel well.

So Mina doesn’t view his virtual concepts as somehow lesser than his traditional ones—just different.

“You can create a great experience for both,” he said. “At the end of the day, what you’re trying to do is create a very enjoyable meal for somebody at home.”

“It was definitely a challenging time to think that so much of our food was just going to be put in a to-go box and thrown in a bag and dropped off at someone’s doorstep.” —Shane Schaibly, First Watch

Still, some chefs are concerned about the contortions required to make food delivery-friendly.

“You’ve read so much and you’ve heard so many interviews where people are saying, ‘Yeah, we’re changing our food so it can travel better,’” said Shane Schaibly, VP of culinary strategy for breakfast and brunch chain First Watch. “But in fact, it seems like they’re taking some of the creativity and some of the love out of the food, just so it can travel.”

Williams echoed that, saying, “I don’t know anyone on my team that’s made it vocal that they’re excited to come up with the new dish that may go onto the menu that goes into the to-go container.”

First Watch quickly embraced delivery when the pandemic hit, but it was not an easy transition for a chain that prides itself on its creative and eye-catching breakfast items.

“It was definitely a challenging time to think that so much of our food was just going to be put in a to-go box and thrown in a bag and dropped off at someone’s doorstep,” Schaibly said.

“We talked a lot about, how do you get the smile in the bag?” 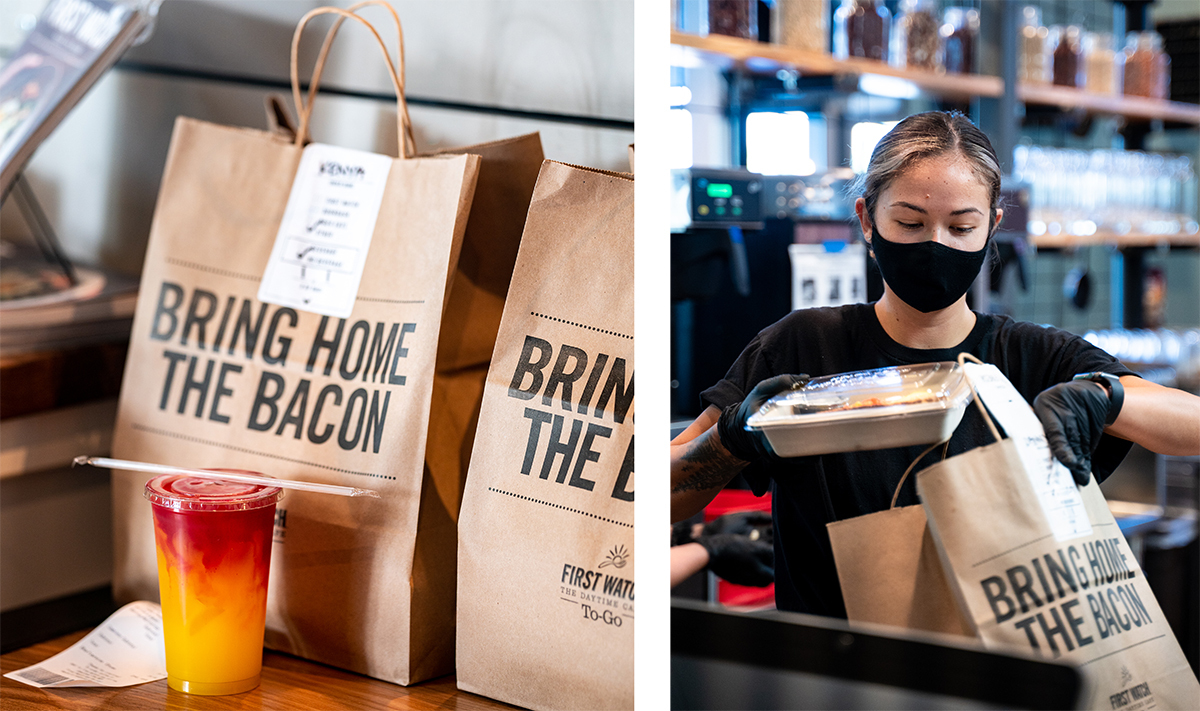 The chain took a proactive approach, promoting delivery on social media with appealing pictures of its food packaged to-go, “Almost saying [to the customer], ‘Hey, it’s OK,’” Schaibly said. It also tried to maintain its goal of creating Instagrammable dishes, even when they arrive in a box. And virtually its whole menu is available for delivery, with some tweaks to plating and garnishing for travel.

“That food going into the box should receive no less care or attention than the food in the restaurant,” he said.

“It’s almost like, make as many packages as you can to survive, you know?” —Mary Aregoni, Saigon Sisters

But there’s something that even the best box or most beautiful dish can’t replace. It’s that particular synergy between food, diner and chef that only happens inside the restaurant.

Restaurateurs get “immediate gratification to see people react to the food and love the food and be happy,” said Mary Aregoni, founder and owner of Saigon Sisters. “We don’t get that now. It’s almost like, make as many packages as you can to survive, you know?”

The Vietnamese restaurant in Chicago, where dining rooms were shut down from Halloween to late January, had become more like an Amazon warehouse, she said—an assembly line for food. She lamented the anonymity of that process, the inability to connect with the customer on the other side.

“You don’t know who it’s going to,” she said. “When I see someone dining in, I get excited when I see a customer I know. I know he likes something a certain way, or I go out and tell him to try this.”

Mina can relate, but he doesn’t see it as an either/or scenario.

“One of the greatest satisfactions is walking out in your dining room,” Mina said. “But it’s not like we’re not getting feedback (on our delivery-only concepts). ... Trust me, we get plenty of feedback.”

“They’re two different things,” he said of restaurants and virtual concepts. “It’s like saying when someone goes to the grocery store and cooks product instead of going out to eat, is that affecting the restaurant business?

“Because of the height of everyone’s stress level, junk food appeals to that place.” —Erick Williams, Virtue Restaurant & Bar

Virtual concepts—once pegged at as many as 100,000 in number—are a kind of mirror image of the modern palate. Tailored to the cravings of the delivery-oriented consumer, brands with names like Bad Mutha Clucka and CraveBurger are cropping up everywhere. Spicy chicken sandwiches were the most-ordered item on Grubhub last year, up 318%; wings were No. 3.

Meanwhile, large chains with the resources to quickly ramp up off-premise and serve customers through multiple channels survived and even thrived during the pandemic, while thousands of independents closed their doors. Some of those locations will undoubtedly be replaced by chains or delivery-only ghost kitchens.

At Saigon Sisters, wings and a spicy chicken sandwich with Vietnamese flavors went from being rarely ordered to hot sellers—though its signature pho is still the most popular. Aregoni said she was thinking about doing a burger.

During a stressful year, it’s no surprise that so many turned to the familiar for comfort.

“I am concerned that people’s palates aren’t progressing,” Williams said. But there’s a time and place for everything. “Because of the height of everyone’s stress level, junk food appeals to that place.”

Williams wouldn’t rule out doing delivery again after Virtue is allowed to return to full capacity. But he is looking forward to having guests back in the restaurant.

He acknowledged the changes the pandemic has had on his trade, on food and on our tastes, but ultimately believes quality will prevail.

“As long as chefs continue to pursue delicious at the highest level, somebody’s going to be intrigued enough to try their food,” he said. “Once you experience that, how do you go back to mediocrity?”