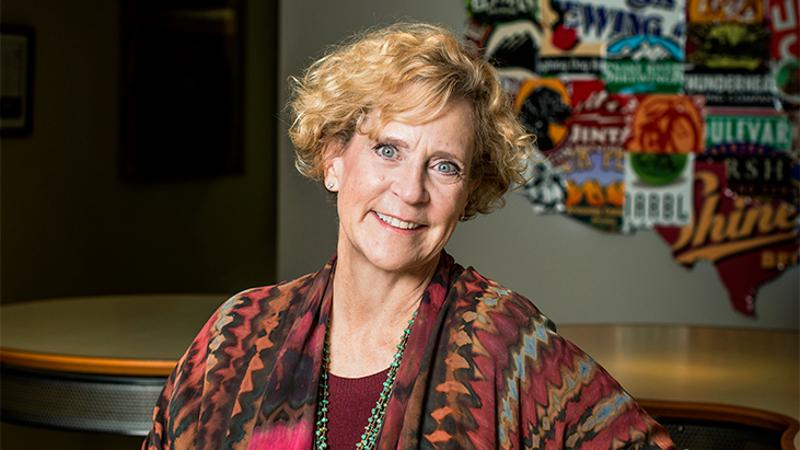 Her charge: 550 full-service, casual burger restaurants, 85% of which are company-operated, and 17% of which are located in malls

Pundits once called it future shock—the pain of dealing with seismic change in less time than a full assessment and response usually warrant. Now it’s shrugged off as a given for staying relevant in the restaurant business.

Just ask Denny Post, CEO of the Red Robin full-service burger chain. She assumed the post in August after discussing the brand’s mission for a year with members of the public company’s board. Her assignment: Align the brand with where consumers’ preferences are heading, and forge a management mindset to keep it there.

There were some obvious complications. Red Robin had been positioned as a comfortable dine-in option for families with other plans for the day or night. Many of the restaurants were located in or en route to malls, often with a multiplex movie theater in or near the complex.

Then came two disruptive forces: Amazon and Netflix. Malls felt the loss of traffic to disruption, as did the theaters. Red Robin suffered the collateral damage in the brick-and-mortar world.

Simultaneously, the fast-casual market arose, giving Red Robin customers another option for burgers promising higher quality than the classic fast-food hockey pucks. The better-burger upstarts promised convenience as well as a step up in taste.

Red Robin was seen as a sit-down concept, not a place to hit in a flash and scurry home for a meal on the couch. “We were intending to be part of a different experience,” Post says. “We needed to reset ourselves to be more nimble, to be wherever the customers would be. We needed to become more flexible, nimble and fluid.”

She’s well into re-engineering the company to make it more agile and responsive. “Flatter is a good description,” she says. “We’ve eliminated a number of roles. We decided, ‘We’re going to invest in the front line, so we’re going to look at whether all the roles are justified above restaurants.’”

One of her bolder decisions was discontinuing a fast-casual version of Red Robin, a spinoff called Red Robin Burger Works, that had grown to 12 stores. Less than two months into her new job, Post decided to close nine of the company-run units and reflag the other three scaled-down branches as Red Robin Express restaurants. “Internally, it was a relief,” says Post. “There had been people who had been saying, ‘Why are we doing this?’ It was taking resources and attention.”

Post professes a keen interest in tapping the off-premise market, but she saw that Burger Works was not the means. “Even with the changes in shopping and movies, there’s still going to be a place for destination brands,” she says. “The really successful ones are going to be the ones that can also do takeaway, a place that provides all the options for whatever the guest wants.”

That could change both what sort of restaurants the company builds and where it puts them. “Traditionally, our trade areas were 12 miles,” she says. “That doesn’t work in the I-want-it-now environment. We could have a different sort of restaurant.” It could be two-thirds more kitchen and less dining area, she adds.

Or, she says, there could be no dining room whatsoever. “I’m fascinated by some of the virtual kitchens that don’t have a brand, that are only supported by a kitchen,” says Post, describing what are usually called headless restaurants.

Still, she sees no reason at this point to shift the ordering process onto smartphones. “We’re still wrestling [with] if an app is going to be right for us or not,” she says. “We don’t have the frequency.” But Red Robin was an early adapter of tabletop ordering devices.

In addition to portability, “Customizable is what we really need to lean into,” she says. Combining convenience, quality and accurate customization—without errors—would provide a formidable edge, she stresses.

Post says she works hard to get buy-in and input from the staff on Red Robin’s direction. “It’s not that I come down with the tablets from my treadmill office,” she says. One of the lessons she took from her years as KFC’s chief innovation officer was “the need to take everyone with you. It’s such a different thing to have everyone excited and engaged.”

To that end, Post says, “I always give the opportunity to tell me that I’m off base. I reaffirm all the time to my direct reports, ‘Let’s be willing to debate the strategy, and then let’s all go.’”

She also says that it’s her credo to fess up when an idea of hers bombs, and to give credit for someone else’s brainstorm.

“Everyone is feeling the changes right now,” says Post. “The team feels good about the changes they’ve made, but it feels very frustrated by the traffic in casual dining not having returned.”

Still, she says, there are strong signs the brand is strengthening connections with the guest, and she intends to commemorate those gains with a permanent tribute. Red Robin uses a feedback tool to measure guest satisfaction and engagement. “I told the staff at a public meeting: If they hit a certain target, I will get a burger tattoo.