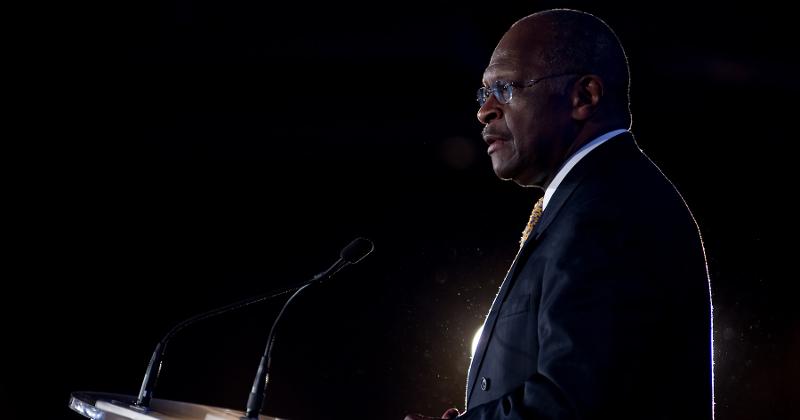 My career might have progressed differently if it hadn’t been for Herman Cain’s mouth. He expressed his pointed opinions freely, in a voice that could trigger avalanches. The combination could ignite an audience the way a lit match sets gasoline aflame. And, oh, did I get burned, even as his first audience of restaurateurs were thundering their approval of the f-bombing he’d just given them.

This was back in the mid-1980s, when few outside of Pillsbury—the Yum Brands of its day—had heard Cain’s name. He had just been named CEO of Godfather’s Pizza, then an emerging concept owned by Pillsbury, whose other holdings included Burger King, Steak and Ale, Bennigan’s and an Asian fast-food concept called Quik Wok. As a young reporter for Nation’s Restaurant News, I was assigned a profile of this former mathematician and BK area director who’d been dispatched to turn Godfather’s into a powerhouse.

Cain later told me that it was his first profile, and that he had it blown up, framed and hung in his office. I beamed—until we found ourselves with a hole in our speaker lineup for an upcoming conference that we produced.  I recommended we give Cain a try.

This was for MUFSO, back in the days when it was still a major event. That year’s get-together promised to be a sizzler because Congress was eying an increase in the minimum wage, and the industry had its muskets and dry powder ready. Right as the battle was about to start, a member of McDonald’s c-suite backhanded the industry by commenting publicly that a hike in the wage would be no big deal.

Cain was filling in for a BK exec on a panel charged with addressing some innocuous topic of the time—motivating employees, maybe, or the pros and cons of these new-fangled things called drive-thrus. Herman didn’t really care what the focus was supposed to be. He took the microphone, announced that he was going to talk about the minimum wage, and honed in on McDonald’s heresy. Some in our industry think this won’t have much of an effect, Cain said in a voice that could guide ships through a fog. “But I think it’s not only a big deal, it’s a big f___ing deal,” he thundered.

Remember, this was back in the olden days when conference attendees weren’t far removed from wearing powdered wigs. You just didn’t hear language like that at events, never mind in a swipe aimed at the industry’s revered leader. Both points were the topic of a spirited discussion in subsequent days with various executives of our organization, who were no longer ecstatic that I’d pushed for  Cain to speak.

In the decades that followed, I’d often interview Cain as he and I changed jobs. His propensity for blunt language became an appreciated signature. Like the time he recounted his nervous first visit to Colin Powell’s house as both were delving more deeply into politics. “He asked me if I wanted a glass of water,” Cain publicly recounted. “Water? I wanted a drink! I thought, ‘How about some wine?’ But I drank the water.’”

The last time I saw Cain, he was speaking at the Restaurant Leadership Conference right after dropping out of the 2012 race for the White House. While he was on stage, my job was to collect question cards from the audience and pass them up to the podium. Herman didn’t know I’d been drafted for the duty. He stopped his presentation to say hello as I passed the cards, and we both laughed at crossing paths that way.

By that time, I was far out of agreement with Cain’s politics, and I wasn’t wholly surprised by the allegations that have surfaced about his dealings with female staffers back in his days as head of the National Restaurant Association. At least one of his alleged targets had been a respected contact of mine, so there was anger there.

But that doesn’t erase how he fought for the industry, using a style and vocabulary that definitely got the attention of Washington, D.C. and the great silent majority of restaurant operators. He died last week of complications from COVID-19 at the age of 74. And that is a big f----ing deal.