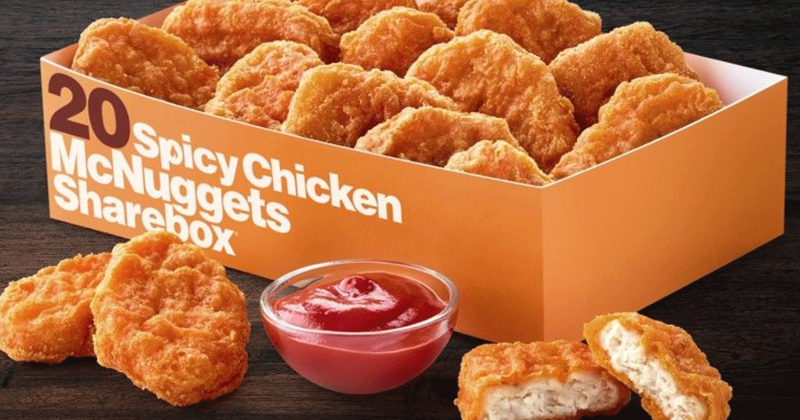 McDonald’s on Wednesday will debut Spicy Chicken McNuggets, which will be the first new flavor of the popular product in the U.S. since its 1983 debut.

But it also represents the second major marketing effort by the Chicago-based burger giant over the past several days, following the debut last week of the Travis Scott partnership. That promotion has been so popular that people have stolen the promotional posters from restaurants to sell on eBay, where some people are even selling receipts.

The campaigns come as the company has ramped up its marketing amid intense competition in the fast-food business.

The company withheld much of its marketing spending in the second quarter. U.S. marketing spend at McDonald’s was down 70% in the period, the company said in late July. In addition, McDonald’s promised to invest $200 million in global marketing this year, half of it in the U.S. That combination has given the company a lot of money to play with.

“We have amassed a sizable marketing war chest to invest in the back half of 2020,” CEO Chris Kempczinski said in July.

The Travis Scott partnership represented one of the bolder initiatives by the chain in years—two-thirds of franchisees in one survey opposed the campaign, citing some of the rapper’s lyrics, coupled with the recent controversy involving former CEO Steve Easterbrook.

Yet indications are that the Travis Scott Meal has sold remarkably well. The burger, a Quarter Pounder with Cheese topped with lettuce and bacon, is sometimes known as the “Travvy Patty,” a take on the “Crabby Patty” sold in the Nickelodeon cartoon Spongebob Squarepants. Anecdotal reports from operators and others have suggested strong sales for the meal.

The company now has high hopes for its Spicy Chicken McNuggets. McDonald’s has said consumers have demanded the spicy version of the nuggets to rival the spicy nuggets Wendy’s brought back last year to considerable success.

To introduce the product, McDonald’s plans to offer a free six-piece of the spicy nuggets with every order of them placed on its mobile app. That promotion runs for one day only on Wednesday. Customers who make $20 purchases on Uber Eats can also get a free 10-piece Spicy Chicken McNuggets next week.

In addition, the company enlisted Anthony “Spice” Adams to appear in a 40-minute video posted on McDonald’s Instagram in which the actor, comedian and former NFL defensive tackle reads a 9,000-word “fine print” of its offer.

For McDonald’s, the ramped-up marketing comes as the fast-food business is suddenly flush with customers and pushing harder for more of them.

Same-store sales at fast-food restaurants have been positive for months thanks largely to the drive-thru as well as mobile ordering and delivery, as consumers opt for restaurant food they can take home with them. Fast-food restaurant spending was up 17% in the week ended Sept. 6, according to the financial data firm Facteus.

Wendy’s, for instance, is planning to spend $15 million to market its breakfast daypart at the end of this year and it recently launched its Pretzel Pub Bacon Burger. McDonald’s believes its own investment and marketing push will give it a major advantage toward the end of this year.

“We went into more of a defensive posture” in the second quarter, Kempczinski said. “It’s time for us to get back on the front foot. That’s why we have the marketing war chest.”