Super Bowl Sunday was pretty typical for the guys at Firehouse Subs: another day, another media appearance. The gig on the nationally televised morning show Fox & Friends had only been confirmed the Thursday before [Rule: always move fast to take advantage of good press]. The Jacksonville, Florida-based sandwich chain sent their kitchen-equipped tour bus up ahead, packed with enough tailgate party fixings for 100 hot sandwiches, chili, Super Bowl themed decorations and Astroturf. Co-founder Robin Sorensen and CEO Don Fox followed by plane. Their PR team, meanwhile, reached out to the New York City Fire Department to appear on the show, in an effort to promote the Firehouse Subs Public Safety Foundation [Rule: always push the emotional connection in your brand]. Founded in 2005, the Foundation raises money for equipment and resources to help deserving “hometown heroes.” 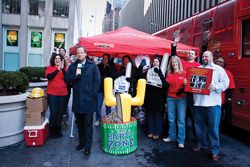 Ever since it was founded in 1994 by brothers and former firefighters Robin and Chris Sorensen, Firehouse Subs has been able to live in a sort of public relations sweet spot, a media darling whose appeal never seems to fade. They have a genuine and compelling story to tell: The family boasts 200 years of firefighting heritage; the brothers’ opened their first store using Robin’s mother-in-law’s credit card; and they have realized the entrepreneurial dream without compromising their ideals [Rule: give your creation story color—and don’t tire of telling it]. “For 12 years, we relied solely on PR and local store marketing to get the word out,” says Fox. And both the mainstream and trade media listened.

“A brand that differentiates itself by both functionality”—food, service, décor, etc.— “and emotionality attracts more media attention,” says Carrie Zimmerman, co-founder of The Zimmerman Agency in Tallahassee, Florida, Firehouse’s PR agency. It’s also vital to have a consistent message that you believe in; Firehouse stays true to its mission to help fire departments and other emergency services [Rule: read that sentence again]. “They don’t take part in once-a-year charity events for breast cancer or Alzheimer’s. The publicity is organic because it’s so relevant,” she adds.

But the past 18 months presented new challenges, as Americans became more tight-fisted with their dining-out dollars. The economy monopolized the headlines this past year—and for the most part, it wasn’t a feel-good story. Many restaurant chains played off the doom-and-gloom angle with pitches about meal deals and discounts. But Firehouse Subs took a different tack. Rather than focus on the negative, they piggybacked on the recession story and created pitches with a positive spin—a strategy that maximized their media coverage [Rule: to make the media pay attention, don't do what everybody else is doing].

Firehouse was in growth mode throughout 2009 and early 2010, adding 45 stores (there are now 377 units, up from 30 in 2001). As the brand expanded, Fox and Robin Sorensen continued to tell their “smart growth” story on radio, TV and in print. [Rule: always be sincere, passionate and as transparent as possible]. “We divide up the media opportunities,” notes Fox. “Robin does the color commentary and I focus on the business. We’re targeting two audiences: restaurant customers, who connect with the food, family and firefighting theme, and potential franchisees, who want to hear about profitability.” [Rule: know your audience—and know when you're talking to them].

In Denver, one of their new markets, a newspaper reporter picked up that positive message for a big story “precisely because it was a bit of good news among all the bad,” recalls Cecily Sorensen, director of corporate communications for the chain and little sister of the founders. And in Fort Smith, Arkansas, a franchisee was interviewed to discuss how Firehouse Subs’ growth was defying recessionary pressure.

Aside from the economy, Firehouse made the most of other news opportunities in 2009. Fire Safety Month in October has always been a major tie-in and this year, placements around that annual event generated over 4 million media impressions, the estimated number of people who saw the media coverage. Franchisees in each market bring in firefighters to demo safety tips, display fire trucks and equipment, hold contests with firehouses and give away fire safety tip magnets in exchange for a $1 to $5 donation. “Fire Safety Month is covered by the media anyway, and promoting it at our stores—with their very visual and personal connection—gets Firehouse great local TV, radio and newspaper coverage,” points out Cecily Sorensen [Rule: capitalize on a promotional tie-in that’s making news].

“Local” is the operative word. “We pitch primarily to the 50 core markets where Firehouse has a presence, not The Wall Street Journal and USA Today,” explains Zimmerman. Stations like WMBF in Myrtle Beach and WBIR in Knoxville and papers including Fort Lauderdale’s Sun Sentinel and the Savannah Morning News accounted for some of October’s four million-plus media impressions [Rule: don't just know your customer audience, know your media audience]. Why then Fox & Friends? “On a day-to-day basis, our media goal is to support the franchisees in our markets,” says Cecily Sorensen. “But the chain is poised for expansion and we’re exploring more national media opportunities.” Super Bowl Sunday was a natural tie-in, as the game is being played in Miami—a dynamic market for Firehouse—and the team is actively promoting its game-day catering menu.

The Firehouse Subs Public Safety Foundation also inspires a lot of local media interest. Basically, the foundation raises money to provide life-saving equipment, disaster assistance, educational tools and other resources to local fire departments and victims. Area franchisees are in a position to determine where the need is greatest—often getting leads from a local news story— and can apply to allocate a portion of these funds accordingly. For example, a Deerfield Beach, Florida, teen was badly burned and 13 South Florida locations donated money to help defray medical expenses. This, in turn, led to a follow-up story in the Miami Herald [Rule: piggyback and then piggyback some more]. Other Firehouse locations have donated new boots, infra-red cameras, defibrillators and a rescue dog to fire departments in need—all of which presented natural photo ops and media exposure.

Social media is an important part of Firehouse’s strategy, too. Since families are the core customers, Cecily Sorensen directs a lot of effort to mommy bloggers. “Kids meals are a hot topic on these blogs, so we talk about our menu and offer deals. Moms take pictures of their kids eating at Firehouse and post them on the blogs and we track the mentions.” The company also has a vibrant Twitter presence and a Facebook community of over 50,000 fans. Instead of bombarding all its followers with promotions and specials, Firehouse creates custom Facebook posts that can be sent directly to fans in specific regions. A new Manager of Social Media Services has the sole job of monitoring Facebook and Twitter and fostering guest relations by carrying on the conversation [Rule: take social media seriously, have a plan for it
and deliver on expectations].

In 2010, Firehouse Subs intends to stick to its talking points, perhaps adding something about the financing/credit crunch—“the number one topic that will impact growth this year,” says Fox. Since the lending community has confidence in Firehouse, the message will be a positive one for franchisees. “And if the recession is in the rearview mirror, we’ll talk about how ‘staying the course’ served us well as our competitors work out ways to get off their ‘value’ message.”

The numbers tell the story

“Smart PR people know it’s not about how many people you touch, but who you touch—the psychographic, not the demographic,” says Carrie Zimmerman of The Zimmerman Agency. “With our laser focus approach, we hit 100 percent of Firehouse’s markets.”