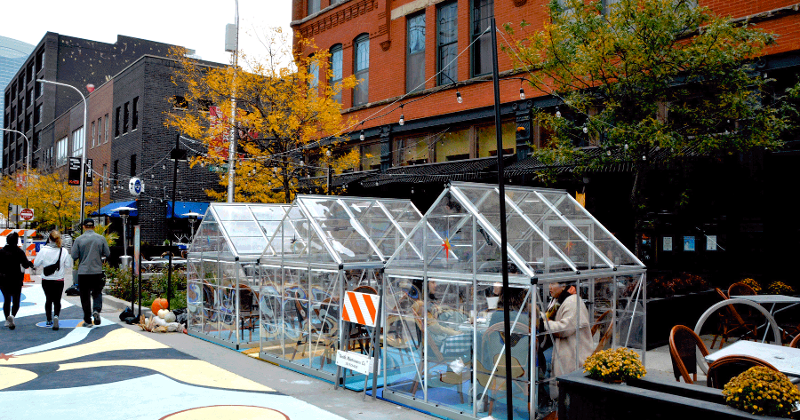 A snowstorm blanketed the Denver area on Sept. 9—one of the earliest on record—prompting the Frasca Hospitality Group to speed up preparations for winter dining outside. Heat lamps and greenhouse structures were set up in the outdoor seating area of Tavernetta, the group’s polished casual Italian restaurant, and three yurts were erected outside upscale Frasca Food & Wine.

“The snow heightened the fact that winter is here,” says Peter Hoagland, COO of Frasca Hospitality. “Customers started to immediately crave richer, heartier dishes.” The kitchens of both restaurants were ready, transitioning the menu from fall to winter earlier than usual.

With cold-weather cities like Denver, Boston, New York City and Chicago giving restaurateurs the go-ahead to extend outdoor dining into winter, financially strapped operators are eager to take advantage of the potential business. Heaters, blankets and other warming aids may lure customers at first, but below-freezing weather may be a tough sell. So, some restaurants are betting they need to do more, getting creative with winterizing the menu, service style, serving ware and even the dining experience.

With support from American Express, Hoagland partnered with a company that manufactures the yurts, each of which accommodates up to four diners, to provide a sheltered venue that “blends in with Colorado’s Alpine aesthetic,” he says. Frasca also developed a two-course service style where “we drop all the food at once, so the servers don’t keep opening the door of the yurt and bring in the cold air.”

Frasca Food & Wine also changed up its serving vessels to adapt to the winterized menu items. Risotto is served in a hollowed out giant cheese wheel and pasta en brodo—pasta in broth—was added. “You can’t serve cacio e pepe on a cold patio; it immediately solidifies,” says Hoagland. So, the servers bring out hot broth in a thermos and pour it over the pasta tableside.

“The aromatic broth creates an experience in the yurt, with the first sips transporting the guest to the herbal scents of the Alpine,” he says. “We’re known for our ‘discovery dishes’ and this is a way to create a similar experience outside.”

Over at Tavernetta, the menu is focusing on baked pastas and braised and roasted meats. Seasonal ingredients still play a big role, as in the restaurant’s mushroom lasagna—two plate-size lasagna noodles with a mushroom ragout on top. Braised veal cheeks and elk shoulder are other entree choices, with warm desserts such as cobblers made with preserved berries, to complete the meal. 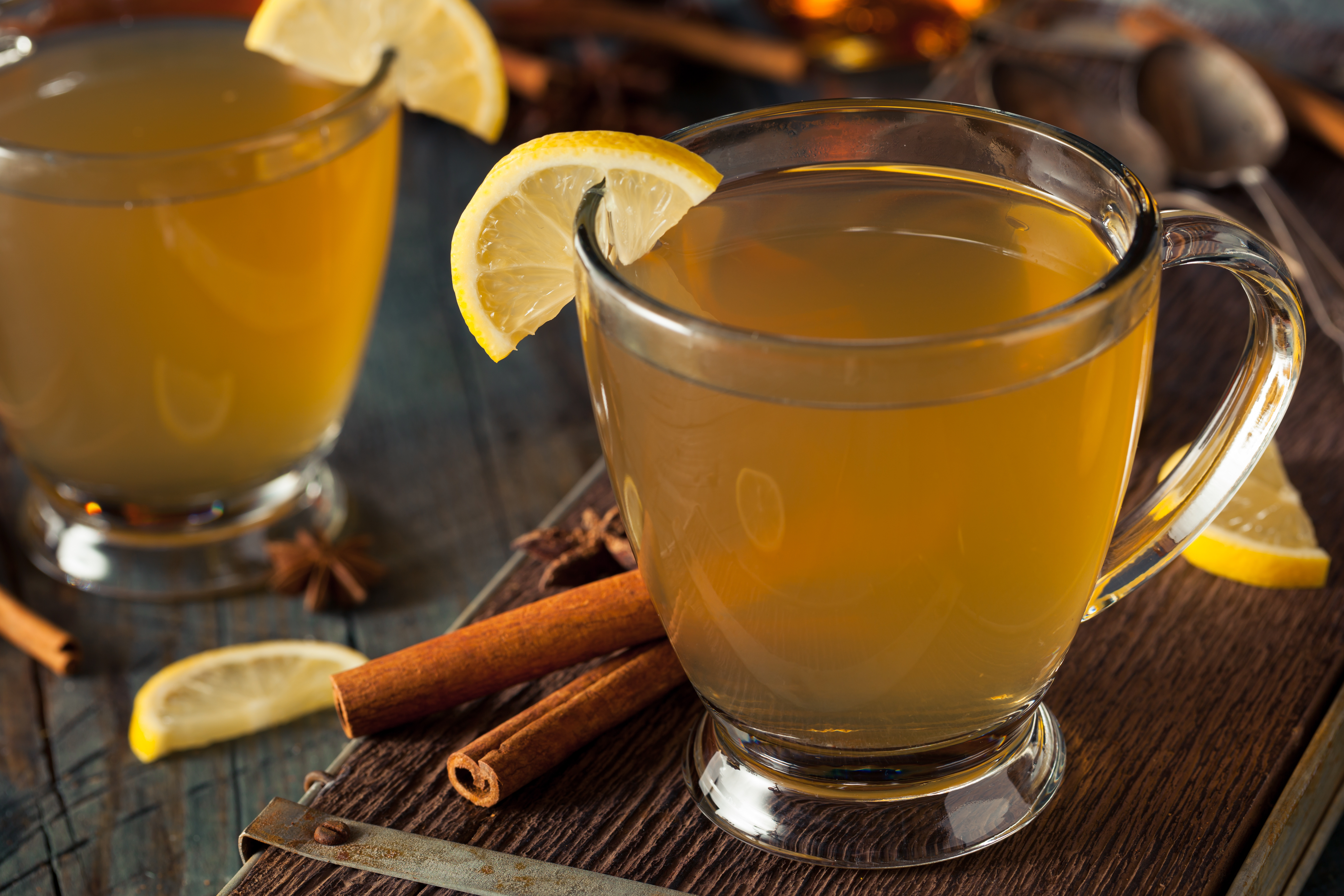 The drinks side of the menu is also heating up. Frasca, known for its award-winning wine list, hasn’t traditionally offered mulled wine and hot buttered rum, but the group is working on versions that fit with its concepts. “We’re keeping the mulled wine lighter, with preserved citrus rinds, star anise and more subtle flavors, and may sneak some Italian amaro into the hot buttered rum. It releases spices when heated,” says Hoagland.

Hot Toddies and Irish Coffee have always been popular at Boston’s Ward 8, an American gastropub and cocktail bar, but this year, the restaurant is expanding on its hot cocktails. “We are known for our classic cocktails and I’d like to see if some of those can be adapted, like a hot old fashioned,” says Mike Wyatt, director of operations for All Day Hospitality, the parent company of Ward 8.

In the works are hot chocolate spiked with green chartreuse and hot apple cider with apple brandy. Both pair well with brunch—a busy daypart for Ward 8. 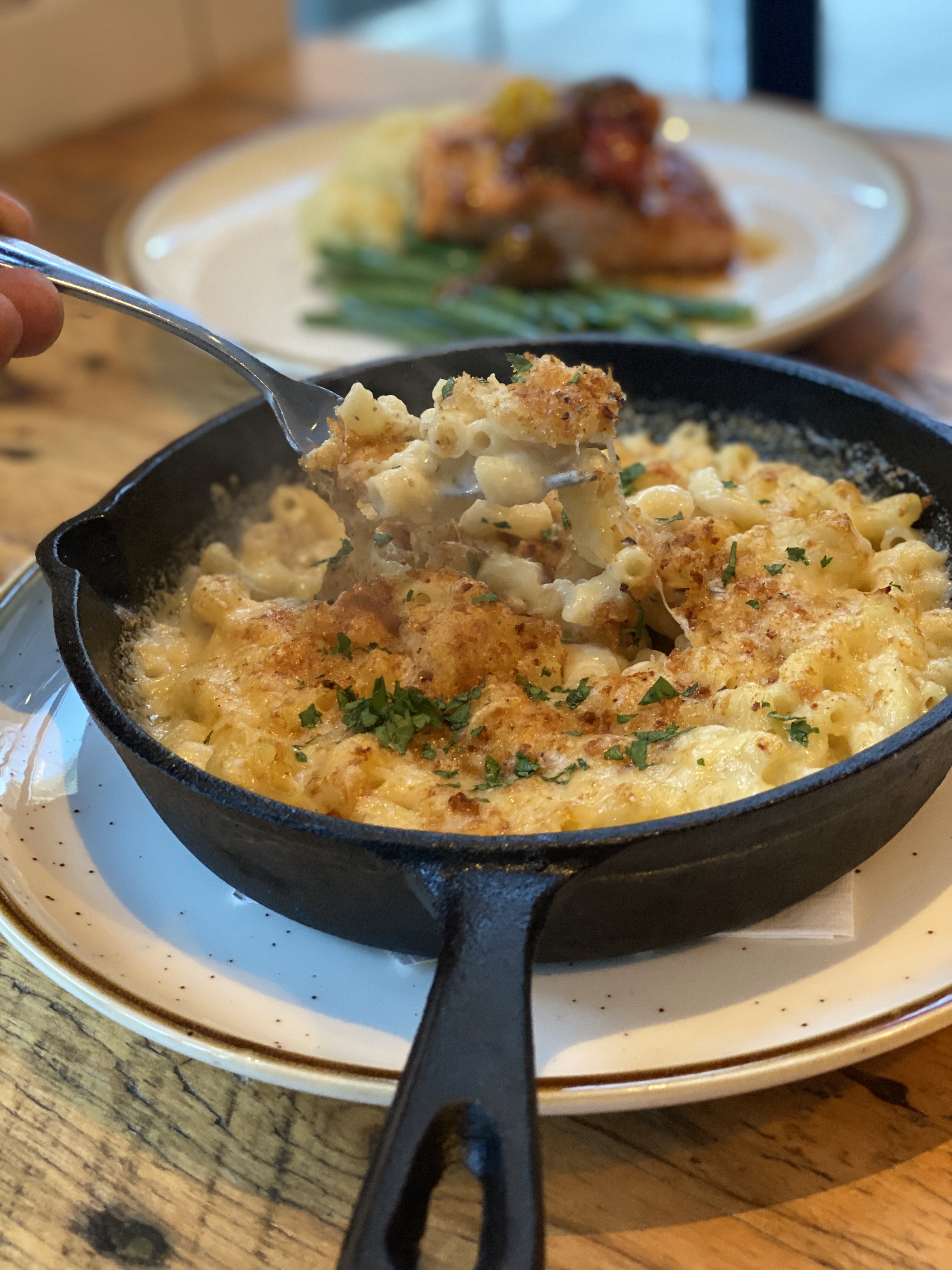 Like Frasca and Tavernetta, Ward 8 began winterizing its menu in September, introducing warming drinks and food earlier than usual. A hearty breakfast burger topped with an egg and Hollandaise and chicken with sage waffles topped with hot gravy are two of the brunch items. Ward 8’s Cast-iron Mac ‘n Cheese, which comes out bubbling hot in an individual cast-iron skillet, is quickly becoming a signature. And ramen served in a ceramic bowl is another item Wyatt is counting on to lure customers outdoors.

“Our 70-seat outdoor patio was a gas station in a former life, then a parking lot. We asked the parking lot owner if we could paint our logo on the attendant’s booth and hung string lights all around the area,” says Wyatt. The result is an inviting outdoor space, he adds.

Back in August, when Boston announced it was extending outdoor dining, Wyatt immediately ordered heaters, knowing that there would be a shortage—just as there was with umbrellas and tables earlier in the summer. “Not having heaters would be a deal breaker for a lot of our customers,” he says. Wyatt chose a style where the flame shoots up the middle “to fit with the look and feel of the patio.” 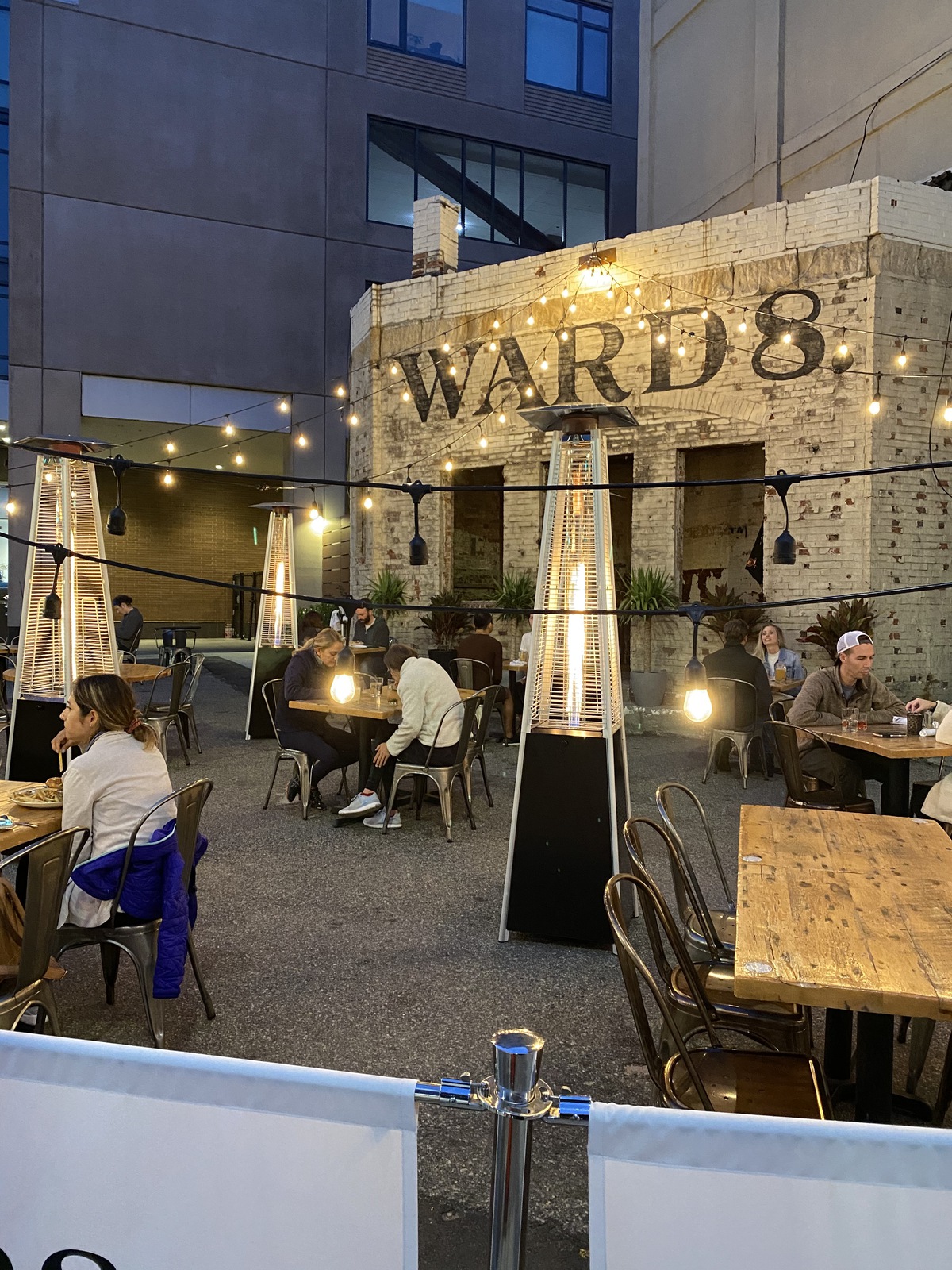 The pandemic has forced many restaurants to hastily create outdoor seating areas, but like Ward 8, prioritizing ambiance can be an advantage. In October, Chicago’s Publican restaurant turned its outdoor space into a Biergarten with a menu to match.

Gerace is referring to the transparent igloos that have sprung up along Chicago’s Fulton Market Street, an area that has been closed to traffic since summer. They’re part of a “dine together, safely apart” initiative underwritten by a neighborhood association, the Illinois Restaurant Association and a corporate sponsor. 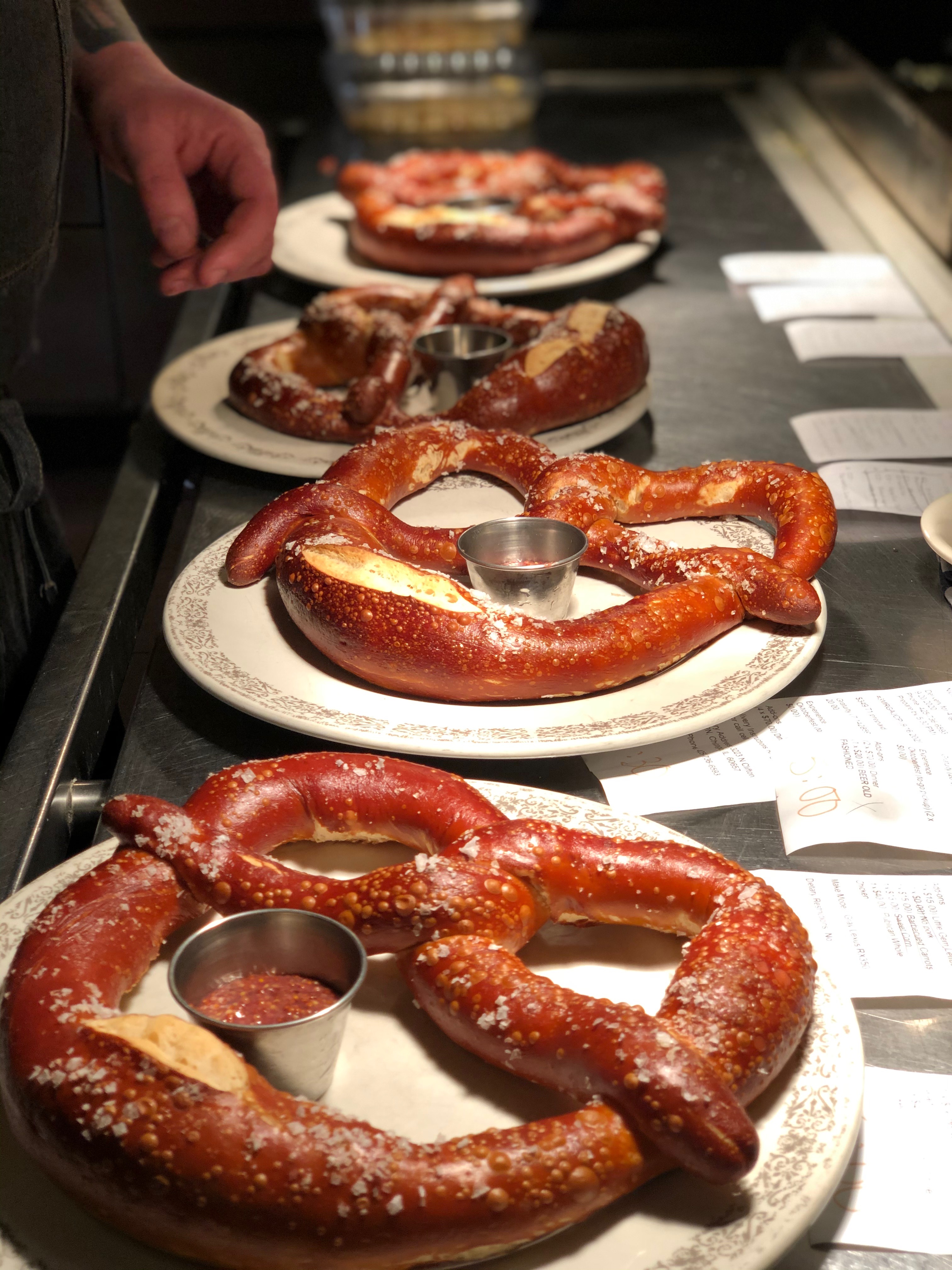 Publican’s winter menu reflects the biergarten vibe. There’s pork and dumplings composed of smoked ham, slow-roasted shoulder and loin, braised in a porky broth and served with speck dumplings that comes to the table in a heavy, lidded pot. A shareable fish stew, similar to bouillabaisse, includes whitefish, shrimp and other seafood with saffron rouille and toasted bread on the side. “It’s served in a copper pot and comes out with a ladle and warm bowls,” says Gerace.

Speedier service is one winter adaptation all the restaurateurs are making. “It’s a quick journey from kitchen to outdoor table at Publican so the food doesn’t have a chance to cool off too much,” says Gerace. “Plus tables are turning more quickly, as guests aren’t lingering as long.”

Leisurely dining is not a priority when the temperatures drop, Hoagland agrees. “We’re not servicing the table as much and guests are finishing a meal in 40 minutes,” he says. “But it’s a challenge for guests to come out in the cold, so we make an extra effort to give them the greatest experience.” 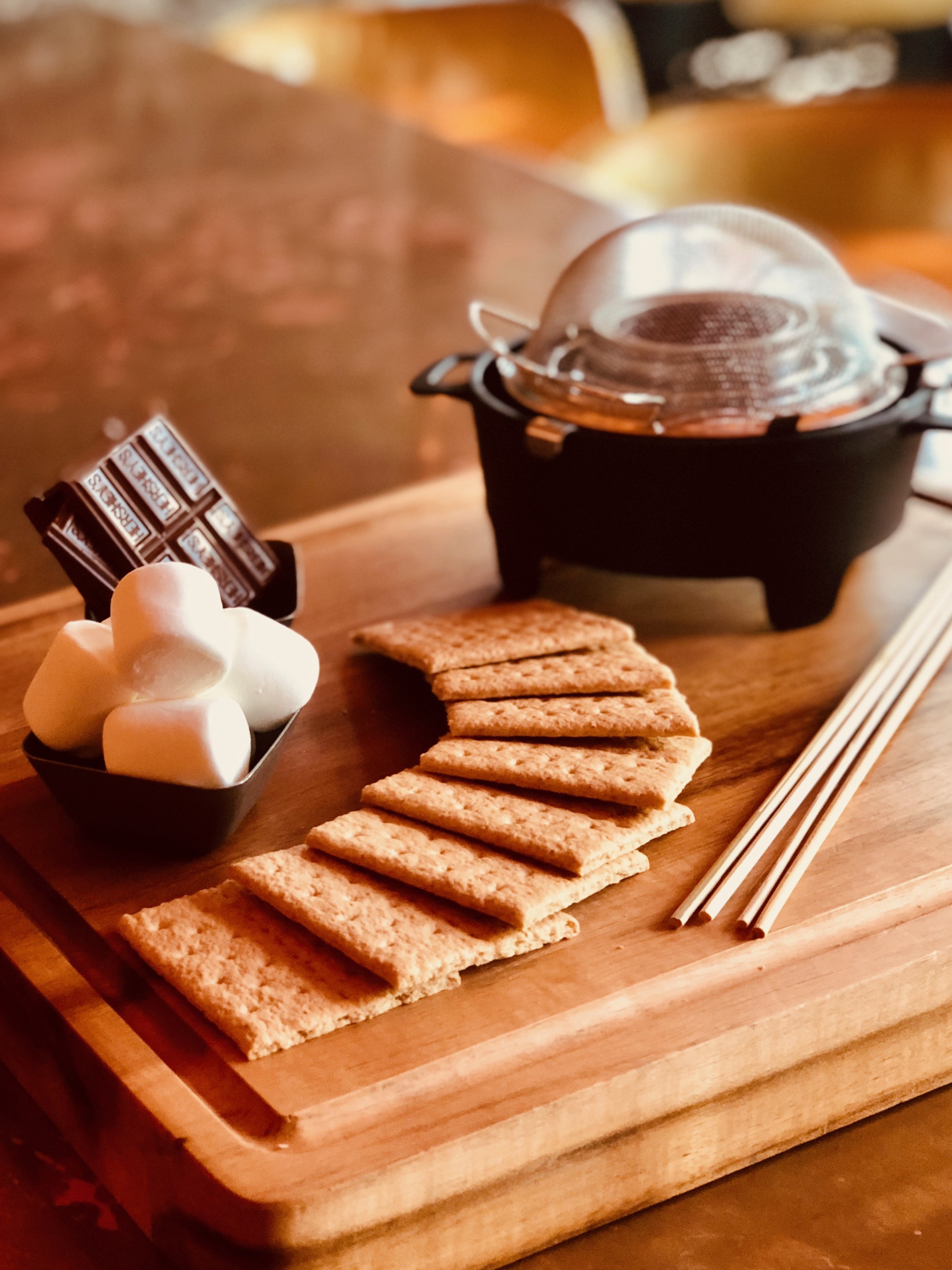 Sometimes, the customers themselves can create that experience. New on the menu at Bandit, a casual spot in Chicago’s West Loop, are Tableside S’mores. The kitchen sends out all the fixings—chocolate, marshmallows, graham crackers and a little covered brazier—for interactive, do-it-yourself s’mores reminiscent of their campfire roots.