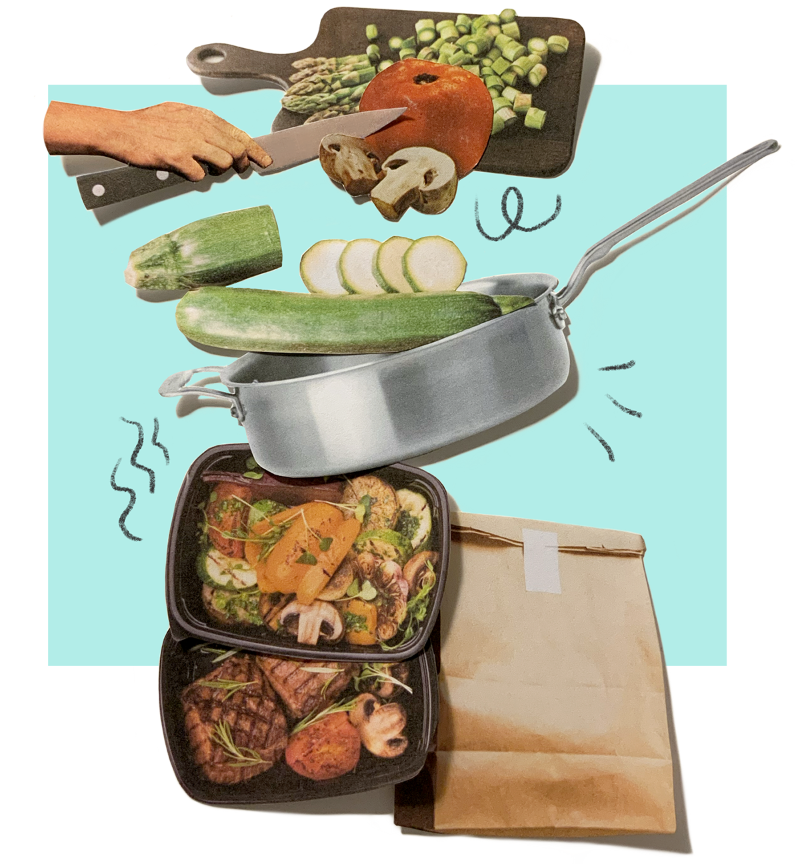 Editor's note: This is the first of a five-part series, along with some bonus content, examining the impact of the coronavirus on restaurant technology.

For one thing, Shimogamo did not offer takeout or delivery. Even though there was demand for sushi to go, the kitchen was too small to handle the extra volume. Building a new location would have been expensive and time-consuming.

“I was just seeing this ceiling in expanding and growing further,” Otomo said. “I just wanted to explore the different opportunities out there. The ghost kitchen really presented an opportunity at the lowest initial cost.”

In December, Shimogamo launched inside Kitchen United’s facility in Scottsdale, Ariz. Kitchen United leases space to restaurants to prepare food for delivery and takeout, with KU staff handling front-of-house duties such as cleaning and dispatching orders. The idea is to allow restaurants to capture more off-premise business with less labor and real-estate cost.

Otomo’s decision turned out to be well-timed. Just as Shimogamo was beginning to establish the new channel, the coronavirus pandemic struck. Dining rooms were shut down virtually nationwide, and consumers sheltering at home began to use delivery and takeout more than ever. As of July, the ghost kitchen had grown to a quarter of Shimogamo’s business, with revenue up 400% since it opened.

Otomo believes her family’s restaurant would have survived the pandemic without it. But she said it would have been “much harder.”

Many restaurants are starting to see the benefits of ghost kitchens, especially during the pandemic. Pre-coronavirus, 15% of operators reported using a ghost kitchen, according to research by Restaurant Business sister company Technomic and the National Restaurant Association. By May, an astounding 51% had turned to ghost kitchens for some or all of their delivery orders, Technomic found.

“I would say that 60% of the restaurant industry pre-COVID-19 was kind of in an elementary school phase” in terms of understanding how off-premise works, said Jim Collins, CEO of Kitchen United, on an August webinar hosted by The Food Institute.“What COVID-19 really did is it forced us all to go to graduate school.”

Ghost kitchens on the rise

As ghost kitchens take off, many restaurants—particularly independents—are still struggling with the loss of dine-in business amid the pandemic. Hundreds have been forced to close their doors. Some in the industry view ghost kitchens as a solution.

“When you think about the indie market getting hammered, when it comes time to reopen—just as we saw with the food truck phenomenon—ghost kitchens are certainly an easier and cost-effective way to reopen,” said Melissa Wilson, principal and off-premise expert with Technomic.

But it’s more complicated than signing a lease, setting up shop and letting the orders roll in. Just like opening a new restaurant, there are a number of dynamics at play.

First, there is only so much ghost kitchen space to go around right now. Kitchen United, which has four locations and several others in development, has been “deluged with inquiries,” Collins said on the webinar. He estimated there are fewer than 100 facilities like KU currently operating.

Zuul Kitchens, a ghost kitchen operator with one location in New York City, is also expanding—and has a waiting list for space in future locations.

Zuul has seen interest from all kinds of concepts, from old-school operators to virtual brands, said Director of Strategy Kristen Barnett.

“It’s been really interesting to see just how broad that interest really is,” she said. “It does make sense given how large the impact of the pandemic has been.”

Both Zuul and Kitchen United have found that some concepts work better than others.

For Zuul, the best fits are those that “understand how achieving digital sales works, digital marketing, how their restaurant and brand function and live on the internet,” Barnett said. “That’s generally where we see better outcomes.”

Kitchen United, which now works with about 65 restaurants, has seen success from big chains such as Chick-fil-A and Wendy’s as well as emerging local brands, Collins said.

Others say there’s something even more fundamental to unlocking a ghost kitchen’s potential: whether people want your food.

“The key to success in satellite kitchens, more than anything else, is having a product that the consumer is clamoring for,” said James Walker, senior vice president of restaurants for Nathan’s Famous. The hot dog chain is using ghost kitchens to aggressively expand its reach, working with operators including Reef and Kitopi to open 40 locations, with more planned.

“So I don’t see ghost kitchens or satellite kitchens as a way for a struggling brand to become relevant,” he said. “What I would say is brands that have a product that was in high demand, ghost kitchens are a good way to expand that product availability.”

A recent visit to Kitchen United’s facility in Chicago seemed to illustrate that point. The nearly 17,000-square-foot kitchen center inside a former culinary school is home to 11 restaurants, some of which offer multiple concepts. But during the weekday lunch rush, most of the shelf space in KU’s pickup area was occupied by two brands: Chick-fil-A and Portillo’s. Both have substantial followings and established locations in the area.

“If no one knows who you are, and you take your brand into a new market, you better have a product that’s in high demand and really compelling,” said Carl Howard, CEO of Fazoli’s.

The quick-service Italian chain dipped a toe into the ghost kitchen market in August, when a franchisee opened the brand’s first ghost kitchen—and first Atlanta location—in a facility called PREP. But right now, Fazoli’s is more focused on adding physical locations and expanding a virtual wing brand to make the most of existing real estate.

In Kitchen United, Shimogamo found itself a bit out of place among lower-priced, limited-service concepts such as White Castle and Boston Market. Otomo quickly learned that not many people coming to KU for sliders were going to want a $40 sushi plate.

“If we just had Shimogamo by itself, I don’t think it would be that successful,” Otomo said. “Having that lower-priced option to match with the audience of the other brands was really essential.”

Faith & Flower, an upscale new American restaurant in Los Angeles, has taken a similar approach. It launched a delivery-only pizza concept called DTLA using existing space in its 1,500-square-foot kitchen. The idea is to create a second revenue stream with a menu that’s more delivery-friendly while dining rooms in California remained closed.

“Every little bit helps,” said Executive Chef Michael Hung. “Especially now, restaurants’ margins are so low. Any kind of additional revenue you can bring in without having to take on extra expense is gonna be necessary.”

DTLA was doing two or three orders a day in its first couple weeks without any marketing behind it, Hung said.

This strategy—using existing kitchen space to produce multiple brands—is catching on right alongside ghost kitchens, and could make sense for restaurants that need the revenue and have the space. Sterling Douglass, CEO of POS integration company Chowly, recently estimated there are already 100,000 such brands on third-party marketplaces.

“There’s all this extra kitchen capacity right now,” said Alex Canter, CEO of online ordering company Ordermark, during an August conference hosted by Food on Demand. “And whether you’re in a shared kitchen space facility like [Kitchen United] or whether you’re looking at your own restaurant to say ‘What can I do to generate some incremental orders?’, this is a moment to evaluate the idea of running five to 10 brands out of your kitchen.” (Ordermark has its own stable of turnkey virtual concepts for restaurants, with names like Firebelly Wings and Outlaw Burger.)

Hung said doubling down on his own kitchen is a better investment than a second location in a ghost kitchen, where it would take a while to build the business while also shelling out for rent. But he says anything that can help restaurants generate revenue right now is worth a try.

For Shimogamo, the ghost kitchen has been worth it, but the restaurant had to adapt to make it work.

“I wouldn’t say it’s a flat-out gold mine,” Otomo said. “You’re going to have to dig through it to get there.”

At the very least, the new model won over Otomo’s traditionalist parents. Both 70, her mother is now retired, but her father still has a hand in the business.

“They stopped nagging at me,” she said. “A family business is always—it involves a lot of yelling and screaming at each other. They stopped doing that, so that’s good.”

She too believes the time is now for restaurants to try something new.

“I think the lifestyle has changed dramatically because of this pandemic, whether we like it or not,” she said. “Even if it costs something, there’s the benefit in exploring technology and different methods of taking orders and operating.

“The business owners with that kind of mentality will only survive. And ghost kitchens do help you in that area, I think.”