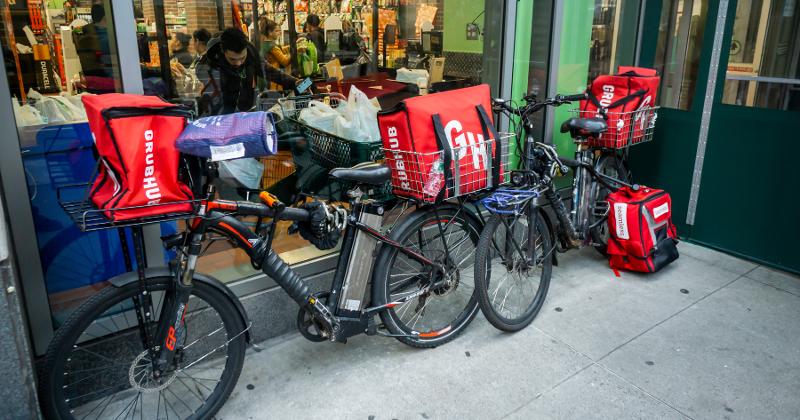 Just Eat Takeaway (JET) has been very clear about its plans for the U.S. and the newly acquired Grubhub business: Identify markets where the company is strongest and invest, invest, invest.

The crown jewel of that strategy is New York City, historically a Grubhub stronghold and an enormous restaurant market.

Unfortunately for Amsterdam-based JET, the Big Apple has thrown a wrench into those plans in the form of a 20% cap on delivery and marketing fees that was recently extended until mid-February.

Globally, fee caps and commission rebates cost JET 142 million euros ($166 million) in the first half of 2021, 110 million of which came in the U.S. and Canada. And a significant amount of that came in New York City.

“Obviously, a lot of the business of Grubhub is in New York, so you can also assume that that's quite a significant part of the fee caps,” said JET CEO Jitse Groen on a call with investors this week, according to a Sentieo transcript. “And it's unfortunate that these fee caps have been extended, but it is what it is, and we're going to have to swallow that difference.”

JET said that without fee caps, Grubhub would have generated 63 million euro ($73.7 million) in earnings before interest, taxes and depreciation in the first half of 2021. Instead, it was 25 million euro in the red.

The situation has left JET with a difficult choice as it looks to establish its strategy here: Move investments from other key U.S. markets to New York, or wait for the city’s fee cap to expire.

“Now, it would be easiest to use the [savings from fee caps expiring],” Groen said. “But we are where we are. So we have to await that and therefore, we will likely move resources to get the same thing done.”

Grubhub, for its part, believes the fee caps are illegal. Founder Matt Maloney, now a member of JET’s board, said on the call that the company will continue to “vigorously fight” attempts to limit the free market in New York. It is already part of a lawsuit against the city of San Francisco related to its permanent cap on delivery fees.

Maloney did not pull any punches when it came to his feelings about New York City regulators.

“The great City of New York [does not appreciate] the billions of dollars in food sales and millions of dollars and tips we've generated for them over the past 20 years,” he said, according to the Sentieo transcript. “But we will still focus on helping restaurants there.”

Working in Grubhub’s favor, Maloney said, is the reopening of downtown offices that should help revive its dormant corporate business. At the same time, the company is retiring its Seamless brand, which Maloney referred to as “a religion” in Manhattan, to put all of its marketing muscle behind Grubhub.

“The Grub brand has grown aggressively and, in fact, surpassed the Seamless brand in New York,” Maloney said, crediting a national TV ad campaign for the greater awareness.

Despite the strategic challenges, Grubhub has continued to grow this year. The company processed 134 billion orders in H1, an increase of 27% year over year, generating $10 billion in gross transaction volume, a 31% increase that reflects higher average tickets.