The Great Food Group in Atlanta could give the local Apple Store a run for its money with the sheer number of iPhones it has in use. CFO Patrick Albrecht equipped all 15 of his managers with the latest versions of the popular smartphone. 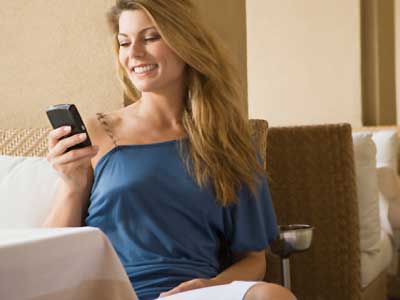 With those iPhones has come a major shift in the way Great Food does business. "We have 75 percent less paperwork and less invoices and handwritten things than we did a year and a half ago," Albrecht says.

Albrecht is the poster child for a new breed of mobile restaurant managers and owners who are saying goodbye to stacks of paper and hello to apps that make their work faster and more efficient. He has made piles of invoices disappear by installing scanners in each restaurant and using searchable note application Evernote to manage invoices. "I have 10,000 invoices in my iPhone in my pocket. We have no filing cabinet, no room holding invoices," he explains.

Albrecht and his managers use the iPhone to turn lights on and off, monitor video feeds, unlock doors, change television channels, adjust thermostats, access employee files, and trigger the sound systems in the restaurants. He also keeps an iPad handy. "I use the iPhone for the quick stuff. When I want to drill down, I'll get on the iPad," he says.

Mobile technology isn't limited to small smartphone screens. Tablets are increasingly working their way into restaurant management. That extra screen space can be a big boost to productivity.

While the technology makes sense for any restaurateur, for multi-unit operations they are a particularly good fit. Albrecht's ability to track all of his restaurants from one place lets him keep a handle of all aspects of the operation. "We used to have an office in every restaurant that contained files and paperwork. To get information, we had to drive there. Now, all the information comes to me," he says.

Embracing mobile technology helps Great Food Group run a lean operation. It's not the only reason for the group's success, but it has helped the company keep itself streamlined. "In a bad economy, we've managed to open three restaurants and hire 170 people. We're proud of that," says Albrecht. (The company’s four restaurants range from the seafood-focused Vinings Fish Company to the newly opened Dos Amigos Cantina.)

Untethering management also keeps extra labor costs down. "We managed to cut out labor because of this. We don't need an office person. I don't need somebody filing away all this stuff," Albrecht says.

He isn't the only restaurateur who is exploring the power of mobile. Chuck Smith, co-founder of the Moonshine Patio Bar & Grill in Austin, Texas, keeps his iPhone handy at all times, too. He and his employees are particularly fond of the HotSchedules mobile app that allows employees to manage their shifts.

"You no longer have the excuse of, 'I didn't see my schedule' or 'I told so-and-so to pick up my shift.' Now, it's all documented. You can't misread it. It created more accountability on the staff side," says Smith. He also uses his iPhone to monitor video feeds from within his restaurant.

Albrecht sees that many restaurants are slow to adopt mobile technologies. He encourages those restaurateurs to open up to the possibilities. "The iPhone and mobile devices are not just toys. They're not just for college kids. They can be a valuable business tool," he says.

Smith suggests starting out small and adding one new mobile technology piece at a time. "Don't overwhelm yourself. Pick one area you want to improve. Start off with that and just do one at a time," he says.

The future of restaurant technology is strongly tied to mobile. Smith is already testing out the idea of using iPads for menu costing, inventory management and invoicing. Albrecht is looking to replace all of Great Food Group's laptops with tablet computers.

"I think in the next five years, people won't know what a laptop is anymore. It's all going to be touchscreen and mobile," Albrecht says.

He is practicing what he preaches. "Every piece of paper that has ever gone through our company is now on my phone," Albrecht says. "We used to have a corporate office. Now the corporate office is my iPhone."